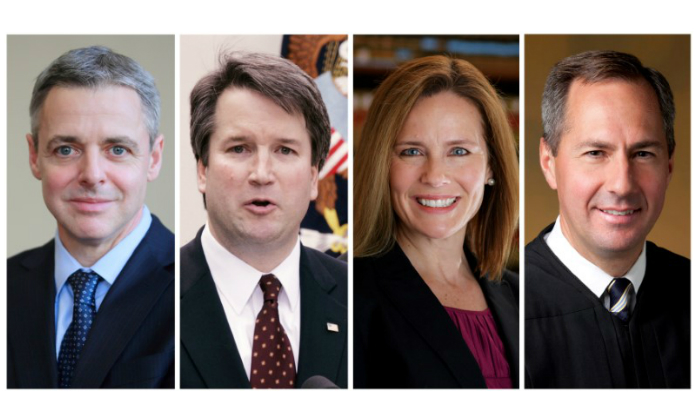 Amid July 8 television talk-show buzz about President Donald Trump’s upcoming Supreme Court nominee announcement, Republicans expressed optimism that the Senate will confirm any of the likely candidates the president puts forth.

Trump is scheduled to announce his nomination to replace Supreme Court Justice Anthony Kennedy at 9 p.m. on July 9. The president has said that he narrowed the list of potential candidates from 25 to two or three.

The front-runners are conservative federal circuit court judges Amy Coney Barrett, Thomas Hardiman, Brett Kavanaugh, and Raymond Kethledge, according to people who are assisting the president with the nomination process or are familiar with the process.

“Republicans are holding four lottery tickets, and all of them are winners,” said Sen. Lindsey Graham (R-S.C.) said on “Fox News Sunday.”

“If you’re a conservative Republican, the four people named—particularly Thomas Hardiman, I’m glad he’s on the list—are all winners, and every Republican should embrace these picks.”

Republicans outnumber Democrats, 51 to 49, in the Senate. With Sen. John McCain (R-Ariz.) on sick leave, a single “no” vote by a Republican could ruin the confirmation. But four Democrats from states Trump won in 2016 voted to confirm Supreme Court Justice Neil Gorsuch last year, leaving the Republicans room for error.

Sen. Roy Blunt (R-Mo.) told NBC’s “Meet the Press” that the Senate will be able to confirm Barrett, Hardiman, Kavanaugh, or Kethledge, but said picking a candidate who can be confirmed quickly is important.

“I’m not sure I’m leaning anywhere on those four nominees. They’re good judges. I think they’d be fine justices of the Supreme Court,” Blunt said. “I do think the president has to think about who is the easiest to get confirmed here and I expect we’ll do that on sort of a normal timetable of a couple of months.”

Leonard Leo, who took leave from the Federalist Society to advise Trump on the nomination process, told ABC’s “This Week” that Trump could line up conservative support for any of the four picks.

Leo, who had helped Trump compile the original list of nominees, said that he would pick Kavanaugh, with Kethledge and Barrett a close second.

Senate Majority Leader Mitch McConnell advised Trump that Kethledge and Hardiman would be easiest to confirm, according to multiple news reports citing administration officials. Kavanaugh has an extensive paper trail that could potentially enable Democrats to stretch the confirmation beyond the 2018 midterm election.

Democrats are ramping up opposition to the president’s eventual pick with a focus on the prospect that the candidate that’s confirmed would vote to overturn Roe v. Wade, a decades-old ruling that struck down laws that criminalized or restricted access to abortions.

While on the campaign trail, Trump said that if he gets to nominate one or two conservative justices, the court would “automatically” overturn Roe v. Wade. But in terms of selecting his nominee, the president said he would not use Roe v. Wade as a litmus test for a nominee.

Leo said that rallying Democrats on the issue of Roe v. Wade is a “scare tactic.” Leo pointed out that in the 36 years after the decision, only one justice on the Supreme Court, Clarence Thomas, has explicitly said that e would overturn Roe v. Wade.

“My goal, first and foremost, has always been to find people to serve on the court who believe in the Constitution as it’s written, and that’s really what drives the conservative legal movement,” Leo said.

“You want judges on the court who understand that the best way to preserve freedom and dignity, and prosperity in this country is to have people who are going to interpret the Constitution as it’s written and not play politics when they’re judges.”

Two Republican senators, Lisa Murkowski of Alaska and Susan Collins of Maine, are pro-abortion and have said they would vote against a candidate who would overturn Roe v. Wade. Previously, Collins voted for Gorsuch because of his belief in the significance of precedent.

During Trump’s presidential campaign, he emphasized that he would appoint conservative justices to the Supreme Court bench if he was elected. Many, including Leo, believe that it was a major contributing factor to his victory in 2016.

While Kethledge and Hardiman may be easier to confirm, Barrett and Kavanaugh have the biggest name recognition among conservatives.

Barrett has a thin resume as a judge but has amassed a formidable and respected body of scholarly work. Kavanaugh has ties to the Bush family, which has often drawn ire from Trump, but he has investigated the Clintons and recommended the impeachment of former President Bill Clinton. Lacking a brand name, Kethledge has a strong conservative track record after 10 years on the federal bench. Hardiman was counted as a front runner during last year’s nomination that ultimately went to Gorsuch.

“We are close to making a decision,” Trump said on July 8. “Let’s just say it’s the four people. Every one, you can’t go wrong. I’ll be deciding tonight or tomorrow sometime by 12 o’clock, and we’re all gonna be meeting at 9 o’clock. And we have a great country, folks.”