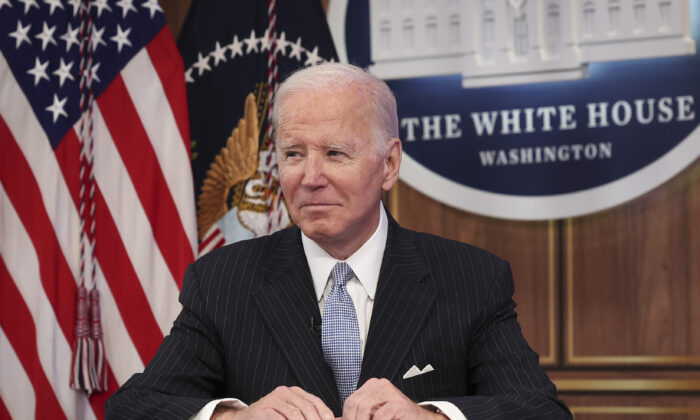 President Joe Biden looks toward reporters as they shout questions during an event in Washington on Nov. 18, 2022. (Win McNamee/Getty Images)
Executive Branch

Republican lawmakers have taken aim at a list of President Joe Biden’s “top accomplishments” that the administration says can be used “when chatting with your Uncle at Thanksgiving.”

The talking points come as the average cost of the classic Thanksgiving dinner for 10 people is $64.05 this month, according to a recent Farm Bureau survey; that’s 20 percent higher compared to the 2021 average of $53.31.

GOP lawmakers quickly took aim at the list, which comes at a time of soaring inflation that has seen some American households having to choose between food and gas.

“This morning, the Biden White House insisted we “bring the receipts to the Thanksgiving dinner!” Tommy Pigott, the Rapid Response Director for the Republican National Committee, said in a statement. “If they insist … This is the most expensive Thanksgiving on record.”

The Committee then noted that turkey costs an extra 21 percent this year while stuffing mix is up 69 percent, and a host of other Thanksgiving dinner trimmings, including frozen peas, pumpkin pie mix, whole milk, and sweet potatoes are all up more than 10 percent.

‘The Most Expensive Thanksgiving on Record’

“Biden has been lying about it for years,” the statement added, in reference to soaring inflation.

Meanwhile, Rep. Ralph Norman (R-S.C.) told Fox News: “Using White House talking points to try and gaslight your own family as to the realities of this administration seems like a miserable way to spend Thanksgiving.”

“Every American family at the dinner table knows that Joe Biden has created the most expensive Thanksgiving on record, and his war on American energy has caused the price of gas, diesel, and home heating to skyrocket,” Rep. Elise Stefanik (R-N.Y.) told the publication.

The list shared by the White House on Wednesday states that Biden’s accomplishments include “tackling inflation and lowering costs” and cites lower gas prices since June.

The cost of living is also “moderating” under Biden, according to The White House.

According to data from AAA, the national average is currently $3.586 per gallon, up from $3.398 a year ago. However, a number of states, such as California, are paying even more, with drivers there forking out $5.113 per gallon.

The decline in costs is largely due to a decision to severely limit coverage of a controversial and pricey new Alzheimer’s drug marketed as Aduhelm.

The talking points state Biden “worked with Republicans to rebuild infrastructure” and to pass the Chips and Science Bill, bought Republican and Democratic lawmakers together to pass the “first meaningful gun safety legislation in 50 years,” and has also “rallied the world in defense of Ukraine” amid Russia’s invasion.

The United States announced $400 million in additional military aid for Ukraine on Wednesday. Since February, the administration has sent approximately $19.7 billion in weapons and other equipment to Ukraine, including the latest aid package.

Elsewhere, the list of talking points includes a string of other “accomplishments,” such as increased employment under Biden and no taxes on people making more than $400,000.

Biden also took aim at Republicans in the list of talking points, calling them “extreme” while pointing to their proposals for a national ban on abortion, “planning to put Medicare and Social Security on the chopping block, and “trying to raise costs on Americans by repealing the Inflation Reduction Act.”

On Tuesday, Biden took to Twitter to share an optimistic post regarding the current state of the economy this holiday season, noting that officials are “seeing initial signs inflation is moderating” and that “folks are vaccinated” while the unemployment rate is “near a 50-year low.”

“America’s best days are ahead,” the president wrote.