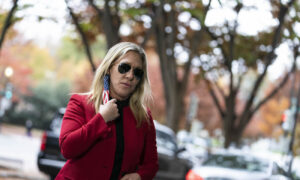 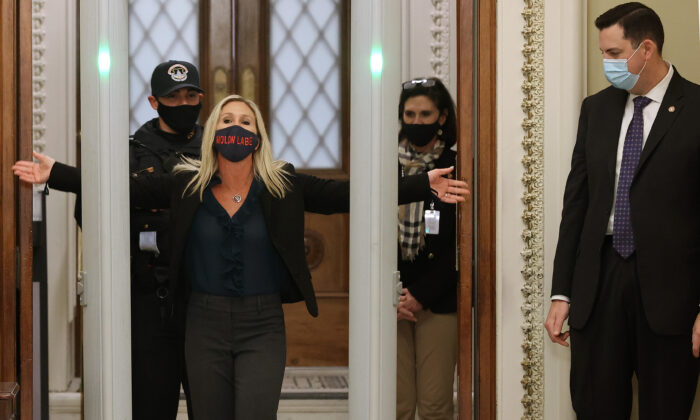 Rep. Marjorie Taylor Greene (R-Ga.) is searched by U.S. Capitol Police after setting off the metal detector outside the doors to the House of Representatives Chamber in Washington on Jan. 12, 2021. (Chip Somodevilla/Getty Images)
Politics

Several Republican lawmakers alleged a double standard in the Democrat push to strip Rep. Marjorie Taylor Greene (R-Ga.) from two committee posts over her past comments and actions, while Democrat lawmaker Rep. Ilhan Omar (D-Minn.) faced no such censure for her past incendiary remarks.

The House on Thursday adopted a resolution along largely partisan lines to remove Greene from the House Budget Committee and the House Education and Labor Committee, with eleven Republicans joining Democrats in voting to punish the Georgia firebrand for past comments, like saying that the 9/11 terror attacks and some school shootings were false flag operations.

“If the Democrat Majority wants to go down this road, they should start by dealing with their own members who have been at this before and AFTER their election to Congress,” he wrote on Twitter, suggesting Democrats were employing a double standard by punishing Greene while downplaying misconduct within their own ranks.

Omar was accused of anti-Semitism after she made remarks critical of Israel and alleged the American Israel Public Affairs Committee (AIPAC) was paying off politicians to take pro-Israel positions. House Speaker Nancy Pelosi (D-Calif.) reprimanded Omar, who later apologized for her remarks, although she retained her committee assignments.

Rep. Jim McGovern (D-Mass.) called Babin’s effort to oust Omar instead of Greene “unbelievable” and criticized him for “false equivalence.”

Omar called Babin’s bid to cut her committee assignments “a ridiculous distraction. Obviously, we can see it is a racist, Islamophobic-fueled smear.”

Babin’s amendment failed, and the House voted 230–199 to adopt the Democratic-backed resolution to censure Greene.

One of the handful of Republicans who voted to strip Greene of her committee assignments, Rep. Mario Diaz-Balart (R-Fla.) noted that he had previously called for similar action against Omar.

Diaz-Balart said on Twitter that, while he viewed Greene’s remarks as “unacceptable,” he said there were “also members I’ve consistently said should be removed from committee assignments for their irresponsible, inflammatory speech.”

“When Ilhan Omar continuously made anti-Semitic comments about Israel, Nancy Pelosi swept it under the rug and suggested that they ‘move forward.’ Why wasn’t she removed from her role on a committee that helps set U.S. policy toward Israel?” Diaz-Balart wrote.

Republican leadership in the House opposed the vote to strip Greene of her assignments, and similarly called out Democrats for a double standard.

“I would remind the majority that several of their own members have engaged in activities or made comments that Republican members find offensive and inappropriate,” Rep. Tom Cole (R-Okla.) said on the House floor Thursday.

“If the majority changes hands in the future, as it surely will at some point, how would the current majority feel if these members are stripped of their committee assignments with no due process?” he asked.

Cole also objected to the fact that Greene was not “given the courtesy of a referral to the Ethics Committee,” which is the Congressional body empowered to investigate misconduct by representatives.

“She’s not being given the same due process that was given to others before facing punishment by the House,” he said, adding that punishing lawmakers for comments made before they assumed office could set a dangerous precedent.

“My friends run the risk of setting off a tit-for-tat exchange for partisan punishment that could cripple the operation of the House now and well into the future,” Cole said, adding, “I truly believe that the majority claiming a new right to be able to exercise a veto over minority committee assignments will ultimately be dangerous for this institution.”

McGovern responded to Cole’s remarks by saying that in the past, members were removed from committees due to the wishes of party leaders, but “in this case, it seems very obvious to us the Republican leadership chose not to act.”

Republicans met on Wednesday to consider whether Greene should be removed from the committees, but opted not to. House Minority Leader Kevin McCarthy (R-Calif.) condemned Greene’s comments but declined to take further steps.

“Past comments from and endorsed by Marjorie Taylor Greene on school shootings, political violence, and anti-Semitic conspiracy theories do not represent the values or beliefs of the House Republican Conference,” McCarthy said after the meeting, adding that Greene had apologized for her comments.

McGovern also addressed the matter of an Ethics Committee referral, saying that, since Republicans have not yet appointed members to it in this session of Congress, “it doesn’t function at this particular point.”

Greene, a first-term lawmaker who supports former President Donald Trump, hours before the vote took time to clarify some of her past comments and actions. She said that her statements about school shootings and the Sept. 11 terrorist attacks do not reflect her views today.

Media outlets and Democrats have also accused Greene of being a supporter of QAnon. Its proponents, who follow clues from cryptic messages posted to anonymous imageboards, allege that some of the most powerful people in the world are part of a cabal of Satan-worshipping pedophiles and cannibals who have engaged in child sex trafficking and ritual abuse.

Reports also claimed that Greene had “liked” a Facebook comment suggesting that “a bullet to the head” of Pelosi “would be quicker.”

Greene, in her speech on the House floor, said that the statements she made “were words of the past.”

“I was allowed to believe things that weren’t true, and I would ask questions about them and I would talk about them, and that is absolutely what I regret,” Greene said, adding that she stopped supporting QAnon in 2018. Greene added that she is a “very regular American” who entered politics after Trump ran for office in 2016.

On Wednesday, Greene said on Twitter that Democrats were engaged in a “mob cancel campaign” and that mainstream media outlets were refusing to air her rebuttals.

“They are only set out to destroy Republicans, your jobs, our economy, your children’s education and lives, steal our freedoms, and erase God’s creation,” she wrote.

Greene called for election integrity in the aftermath of the 2020 presidential election. After the Jan. 20 inauguration of President Joe Biden, Greene filed articles of impeachment against him.

The last congressperson to be stripped of their committee assignment was Republican congressman Steve King in 2019 after he was questioned during a media interview why white supremacy is considered offensive. He is no longer in Congress.

Jack Phillips, Mimi Nguyen-Ly, and Reuters contributed to this report.