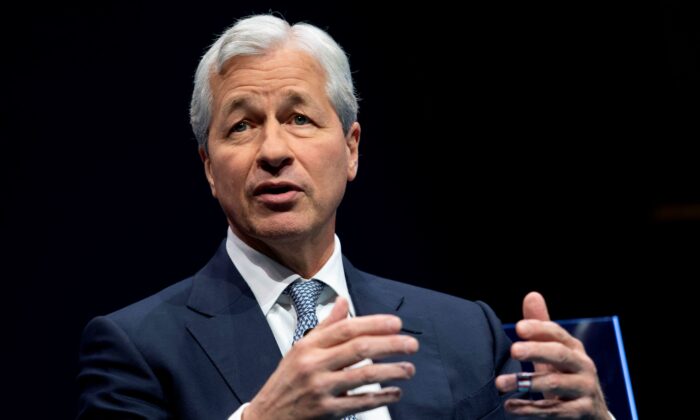 The CEOs of America’s seven biggest banks testified before Congress on Sept. 21, providing a snapshot of their efforts in the area of consumer protection and access to credit, while Democrat lawmakers grilled them on diversity and inclusion and Republicans focused on core economic issues and criticized Democrats for woke “posturing.”

The hearing—titled Holding Megabanks Accountable—kicked off with a statement by Rep. Maxine Waters (D-Calif.), chairwoman of the House Financial Services Committee, who noted that since last year’s hearings with bank chiefs, the nation has continued “to battle an ongoing epidemic of inflation” that’s squeezing American households.

Against the backdrop of red-hot inflation, the economic repercussions of the conflict in Ukraine, and sharply rising interest rates, banks continue to play a key role in protecting consumers and providing access to affordable credit, Waters added.

The nation’s biggest banks have, through mergers, become even bigger, Waters said, vowing to “get to the bottom of who these mergers are actually benefiting.”

One concern flagged by Waters was growth in banking deserts—areas with a lack of banking services—owing to branch closures as a consequence of mergers. Another issue that she teed up for discussion during the session was the commitments by the banks to underserved communities.

The Democrat lawmaker also vowed to grill bank CEOs on their diversity and inclusion pledges and what they’re doing to “protect” their employees following the U.S. Supreme Court’s decision to overturn Roe v. Wade.

Rep. Patrick McHenry (R-NC), ranking member of the Financial Services Committee, said he opposed the premise of the hearing, calling it “theater, not oversight.”

The Democrat majority on the committee has had “two years to do its job of oversight, and they’ve failed miserably,” he argued.

“Now that we’re over a month away from the midterms, they’re posturing,” McHenry continued.

“Democrats first held this hearing back in 2019 in search of a headline. When they failed to garner the positive press they were seeking, the Democrats felt emboldened by the Biden administration and their one-party rule of Washington to drag CEOs back in 2022, demanding they parrot their progressive agenda,” he said.

While the list of issues facing America’s financial system is “long” and should be addressed, McHenry said that Democrats at today’s hearing would “encourage banks to make lending decisions based off ‘woke’ politics rather than creditworthiness.”

“We’re going to hear about social issues rather than economic issues,” he continued, accusing the Biden administration of seeking to foment uncertainty in America’s financial system and stifle innovation.

This, he claimed, would lead to long-term problems in the provision of essential services by banks, such as overdraft protections, peer-to-peer payments, and buy-now-pay-later schemes.

Andy Cecere, president and CEO of U.S. Bancorp, was the first to testify. In light of the fact that the committee has been seeking a “short-term low-cost small-dollar” solution for credit access, Cecere said Bancorp has made it easier for individual customers and small businesses to access credit, including via a service allowing customers to obtain a loan of up to $1,000 “in a matter of minutes.”

Cecere added that Bancorp has also streamlined credit access to small businesses, processing applications within 15 minutes, and that the institution has rolled out a program to boost homeownership rates in minority communities.

“I’m proud that PNC was the first large bank to actually modify its overdraft practices. Since the rollout of our Low Cash Mode product, overdraft fees at PNC have dropped by nearly 50 percent,” Demchak said, adding that the bank has made inroads into facilitating peer-to-peer payments.

“PNC has had a social purpose since the day it was founded. As a service organization, we believe our success is directly tied to the success of communities and customers in our communities,” he added.

The ‘Secret Sauce’ of Free Enterprise

Next to testify was Jamie Dimon, chairman and CEO of JPMorgan Chase & Co., who talked about the role of America’s largest banks “as a force for good for the country, its citizens, and the global economy.”

Dimon touted core American values that have created what he described as the most innovative and prosperous economy that the world has ever seen.

“We live in the greatest country in the world predicated on foundational beliefs in freedom of speech, freedom of religion, freedom of enterprise, the sanctity of the individual, and the promise of equality and opportunity for all,” Dimon said.

“The secret sauce of free enterprise is not only the free movement of capital but, more importantly, the value of knowledge and free people exercising their rights,” he added.

Jane Fraser, CEO of Citigroup, spoke about expanding the bank’s footprint to serve more communities, while touting Citi as the biggest financer of affordable multifamily housing in the United States for 12 years running.

“Breaking down the barriers to banking is also a top priority for us,” Fraser said, noting that Citi recently became the first of the biggest U.S. banks to eliminate overdraft fees and returned item fees.

“Bottom line—my Citi colleagues and I understand and embrace the responsibility banks play in advancing economic empowerment and mobility,” she said.

Brian Moynihan, chairman and CEO of Bank of America, discussed a range of issues, including various ways of eliminating or reducing overdraft fees.

“We deliver for our clients, for our teammates, for our communities, and for our shareholders,” Moynihan said. “We believe in delivering both profits and purpose.”

Moynihan said that in June and July of this year, the first two months after Bank of America implemented “sweeping” changes to overdraft fees, there was a decline of 90 percent in fees related to overdraft services compared to the same period last year.

William Rogers Jr., chairman and CEO of Truist Financial Corporation, touted his institution’s efforts to boost lending in low- and moderate-income communities and hailed a recent minimum wage boost to $22 an hour.

Charles Scharf, president and CEO of Wells Fargo & Company, talked about how the bank provided billions of dollars in emergency pandemic-lending to America’s small businesses.

“In addition, we issued a second sustainability bond in the amount of $2 billion that will finance projects in programs supporting housing affordability, economic opportunity, renewable energy, and clean transportation,” Scharf said.

Following the bank chief presentations, lawmakers took to posing questions, with Waters pressing Scharf about what he, as a relatively new CEO, has done to bolster diverse hiring practices and address the “culture of corruption” that existed at Wells Fargo.

Scharf said that since he took the helm, there have been “tremendous changes” at Wells Fargo, including policies in place that “requires diverse candidates” and “helps us attract the best candidates.”

McHenry, in an echo of his opening remarks, said that the “main thing” that needs to be discussed during the session is the state of the economy.

“We see inflation eroding families’ budgets,” he said, adding that the current environment of raising interest rates was hitting home sales and squeezing housing supply at a time when more housing units are needed in the country.

McHenry asked Fraser, given that Citi has a global footprint, to address the impact of rising interest rates on the U.S. economy and globally.

Fraser replied by saying that higher rates to tame inflation are likely to moderate economic growth in the United States and in the rest of the world.

“We are very concerned about the high prices that consumers are facing in America and, indeed, around the world,” she said.

The bank chiefs are next scheduled to testify on Sept. 22 before the Senate Committee on Banking, Housing, and Urban Affairs.