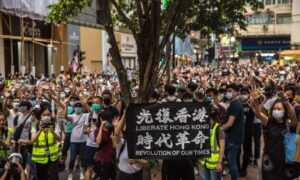 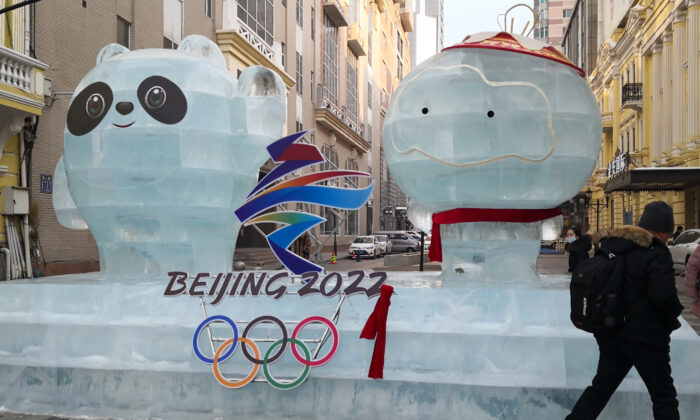 An ice sculpture of mascots for the 2022 Beijing Winter Olympics and Paralympic Games on a street in Harbin, China, on Dec. 28, 2020. (STR/AFP via Getty Images)
China-US News

U.S. Sen. Rick Scott (R-Fla.) and six other Republican senators have introduced a resolution calling on the International Olympic Committee (IOC) to move the 2022 Winter Olympics out of China due to the country’s poor human rights record.

If China fails to demonstrate “significant progress in securing fundamental human rights, including the freedoms of religion, speech, movement, association, and assembly,” the IOC should rebid the 2022 Winter Olympics and let the Games “be hosted by a country that recognizes and respects human rights,” the resolution (S.Res.13) stated.

China’s capital Beijing was selected as the host city for the 2022 Games over Almaty, Kazakhstan in July 2015. When Beijing last hosted the Summer Olympics in 2008, many also criticized the IOC’s decision to allow China to host, given its severe human rights violations.

“Communist China is committing genocide against the Uyghurs in Xinjiang, restricting the human rights of Hongkongers, and threatening Taiwan. Communist China should not be allowed to host the 2022 Olympic Games while simultaneously running concentration camps, violating human rights, and systematically oppressing the people of Hong Kong,” Scott stated in a Feb. 2 press release from his office.

On Feb. 2, the Inter-Parliamentary Alliance on China (IPAC), a group of international lawmakers, issued a statement, calling for an international legal investigation into human rights violations in Xinjiang, in response to a BBC report of Chinese men engaging in mass rape, sexual abuse, and torture against women in Xinjiang internment camps.

“The time for mere words has long passed. We must now move towards a coordinated effort to hold the Chinese government to account. These atrocities must be stopped,” IPAC stated.

In Hong Kong, Beijing has implemented a draconian national security law that punishes vaguely-defined crimes such as subversion and secession with a maximum penalty of life imprisonment.

According to the Hong Kong police, at least 97 people have been arrested under the law as of Tuesday, with eight of them prosecuted. Among them is Jimmy Lai, a pro-democracy activist and founder of the local newspaper Apple Daily, who has been charged and is now in detention awaiting trial.

Scott added: “The Olympic Games are an incredible opportunity to allow the world’s best athletes to represent their countries and unite our nations, and under no circumstance should be hosted by one of the world’s worst human rights abusers.

“I am proud to lead my colleagues to send a clear message to the IOC: stand up for freedom and urge Communist China to do the right thing, or find a new home for the 2022 Olympic Games.”

“It is insane that a country actively involved in egregious human rights abuses that amount to genocide would have the privilege of hosting the Olympics or any other international sporting event. China should be no exception,” Rubio said in the statement.

In an emailed response, the IOC said that in choosing Beijing to host the Olympics, its evaluation commission had “considered the views of independent NGOs with respect to  a number of  issues, including human rights” and raised the concerns with government authorities. “We received assurances that the principles of the Olympic Charter will be respected in the context of the Games,” it added, and said it would continue to discuss “Games-related issues” with the organizers.

On Feb. 2, a coalition of over 180 groups, including International Tibet Network, World Uyghur Congress, and Germany Stands with Hong Kong, signed a joint letter to world leaders, urging governments to boycott the 2022 Beijing Winter Olympics.

“[A]nything less will be seen as an endorsement of the Chinese Communist Party’s authoritarian rule and blatant disregard for civil and human rights,” the letter stated.

When reporters asked White House press secretary Jen Psaki about the new administration’s stance on calls to boycott the 2022 Olympics, during a daily briefing on Tuesday, she said Washington did not have any “change of our approach to the Beijing Olympics.”

In December last year, Human Rights Watch sent a letter to IOC President Thomas Bach, urging him to “immediately conduct robust human rights due diligence around the preparations for the 2022 Beijing Olympics, and to explain its efforts to manage human rights risks connected to the Games by February 2021.”

In September 2020, more than 160 human rights groups also sent a letter to Bach, asking him to “reverse its mistake” in choosing Beijing to hold the 2022 Winter Olympics.

This article has been updated to include the IOC’s response.