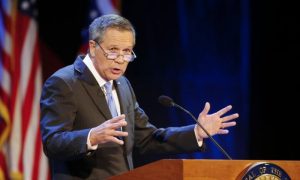 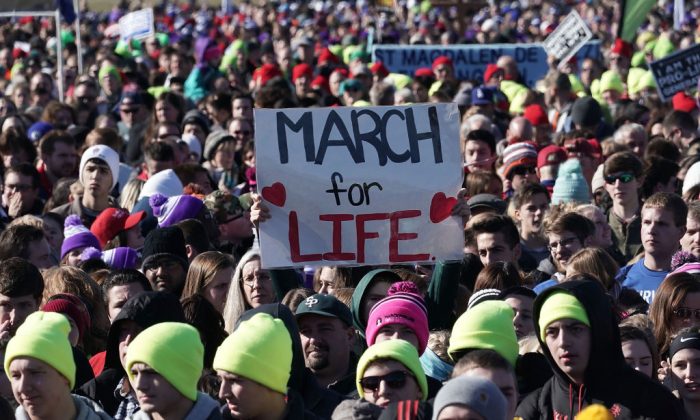 Pro-life activists participate in a rally at the National Mall prior to the 2018 March for Life in Washington, on Jan. 19, 2018. (Alex Wong/Getty Images)
Politics

Republican Senators Explain Why They Skipped Vote on Pro-Life Legislation

The Senate on Jan. 17 voted against the “No Taxpayer Funding for Abortion Act,” a measure meant to stop taxpayer-funded abortion. Missing from the vote were 5 Republican Senators.

The bill makes permanent the prohibition on the use of federal funds for abortion or other health coverage that includes abortion and is sponsored by Sen. Roger Wicker (R-Miss). The prohibitions listed on the legislation do not apply to abortions in cases of rape or incest or where a physical condition endangers a woman’s life unless an abortion is performed.

Despite the Republican party’s four-vote edge in Senate, the bill failed to reach a majority, facing a defeat of 48-47. For the bill to pass, 60 votes are needed. Voting included two nays from Republican senators Susan Collins (Maine) and Lisa Murkowski (Alaska) while Democratic senators Bob Casey (Pa.) and Joe Manchin (W.Va.) voted with the Republicans.

However, five GOP senators did not cast a vote: Lamar Alexander, Richard Burr, Mike Crapo, Lindsey Graham, and Rand Paul. The senators’ spokespersons told The Epoch Times that they supported the legislation, but were unable to vote physically due to different individual reasons.

A spokesperson for Graham said that he was in Turkey at the time of the vote discussing the fight against the ISIS terrorist group. Graham had left Washington on the night of Jan. 16.

“Graham has a long history of votes in support of the pro-life cause and just introduced the 20-week bill this week in the Senate,” spokesperson Kevin Bishop said via email. “He would have proudly supported the Wicker amendment had he been there today.”

A spokesman for Alexander said that he “was traveling back to Tennessee to attend to a personal matter” and that he was “pro-life and supportive of the measure.”

Burr had to return to North Carolina at the time and was unable to stay for the vote, his spokesperson said, without going into details.

Meanwhile, Crapo’s spokesperson said via email that he missed the vote “because he was ill.”

A spokesman for Paul told the National Review that “Unfortunately, today was scheduled to be a day out of session and Senator Paul committed to various events outside of Washington before this last minute vote was scheduled.”

The vote comes a day before the 45th March of Life on Jan. 18. About 100,000 people are estimated to attend the peaceful demonstration against abortion.

Vice President Mike Pence will be the headline speaker at the event’s 37th Annual Rose Dinner representing the Trump administration, a more low-key appearance compared to his 2017 address to rallygoers at the event.