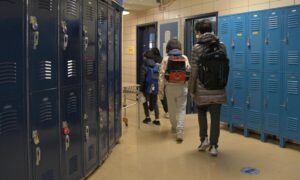 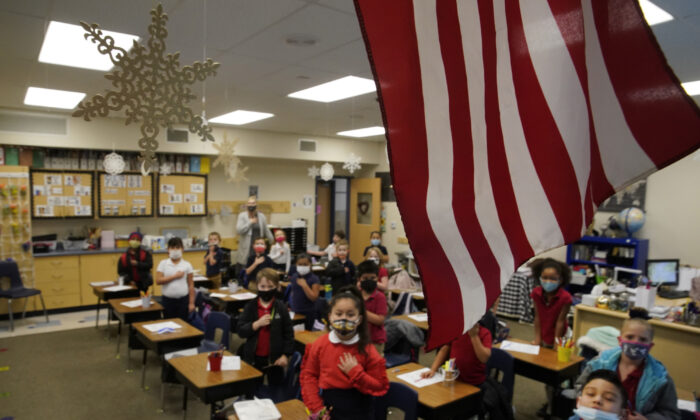 Students recite the Pledge of Allegiance before school at Freedom Preparatory Academy in Provo, Utah, on Feb. 10, 2021. (Photo by George Frey/Getty Images)
Education

A pair of Republican congressmen are calling on the Department of Education to reconsider spending federal dollars to promote critical race theory in civics and history classes across the country.

In a letter (pdf) to Education Secretary Miguel Cardona, Reps. Doug Lamborn (R-Colo.) and Jeff Duncan (R-S.C.) said they have “deep concern” about a newly proposed priority criteria for a $5.3 million American History and Civics Education grant. Under the new rule (pdf), the grant will prioritize education programs that incorporate the ideas of the New York Times’ 1619 Project and critical race theorist Ibram X. Kendi into their teaching.

“Students should learn about the uniqueness and greatness of the American systems and the challenges we have overcome as a nation,” the letter reads in part. “It is therefore counterproductive and even dangerous to allow our vulnerable school children to be taught the falsehoods prevalent in the 1619 Project or in Ibram X. Kendi’s ‘How to Be an Anti-Racist.'”

Kendi’s work, according to the congressmen, is antithetical to the American Dream, which has “drawn millions of individuals to America’s shores and created the most prosperous nation in human history.” They also pointed out that the 1619 Project is “a racially divisive, revisionist account of history” that, as its name suggests, is in fundamental opposition to the true founding date of the United States in 1776.

The congressmen added that while they believe students should be taught about the negative consequences of slavery and the significant contributions of the black community in U.S. history, schools should not promote critical race theory, an ideology that undermines America’s founding ideals.

“Simply put, the teachings of Critical Race Theory want to reject the principles established in our Constitution and our individual God-given rights, and instead divide individuals into competing racial identity groups while doing little to help minority students advance,” they warned in the letter.

According to the Department of Education, the choice of the 1619 Project and Kendi’s book as exemplary teaching materials aligns with President Joe Biden’s executive order, which aims to advance “racial equity” and better support “underserved communities.”

“The Department recognizes that COVID-19—with its disproportionate impact on communities of color—and the ongoing national reckoning with systemic racism have highlighted the urgency of improving racial equity throughout our society, including in our education system,” reads the proposed rule, which is undergoing a 30-day public review period in the Federal Register.

The proposed rule marks the Biden administration’s latest move to teach American students that historical racism remains deeply embedded in today’s America. On his first day in the White House, Biden dissolved the Trump administration’s advisory 1776 Commission and tossed its first and last report, which called for a return to “patriotic education” focusing on how Americans have fought to live up to the values enshrined in the nation’s founding documents.