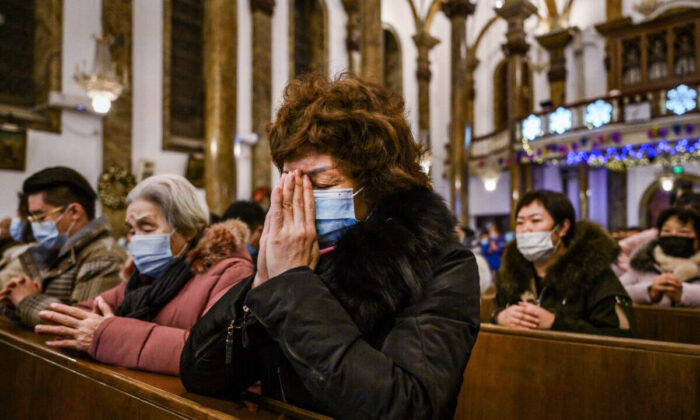 Chinese Christians pray during a Christmas Mass at a Catholic Church in Beijing, China, on Dec. 24, 2020. (Kevin Frayer/Getty Images)
Thinking About China

Repression of Religion in China

Beijing effectively banned Christmas, underscoring the lack of religious freedom in China, where Xi Jinping Thought is now being incorporated into religious writings.

The ban allegedly came in order to preserve Chinese culture and prevent foreign influence. Generally, Christmas is celebrated as a commercial holiday in China, providing retailers with a tremendous spike in earnings. However, apart from Christmas as a consumer holiday, some Chinese celebrate Christmas as part of their religious beliefs.

It is difficult to know the actual number of Christians in China, because the vast majority attend unregistered “house churches.” By some estimates, China is home to as many as 115 million Protestants and at least 12 million Catholics.

The Chinese Constitution supposedly guarantees religious freedom, but cults, superstitions, and non-orthodox beliefs are banned. And the Chinese Communist Party (CCP) decides what is a religion and what is orthodox, and everything else is prohibited.

Numerous religious groups are specifically banned in China such as Falun Gong, the Church of Almighty God, and the Association of Disciples. Additionally, while Buddhism is permitted, Tibetan Buddhism is restricted. All monks and nuns in Tibet have been subjected to reeducation. Those who refused to abandon their beliefs were imprisoned, tortured, or killed.

In 2015, the CCP ordered the removal of 1,200 crosses from churches in Zhejiang Province. A Protestant pastor was sentenced to 14 years in prison for refusing to remove the cross from his church.

Muslims have suffered some of the worst repression, even being told that their Hajj must be approved by the National Religious Affairs Administration, which is overseen by the Party. In Xinjiang, up to 1 million Uyghur Muslims have been imprisoned, and in many instances, tortured, raped, or forcibly converted.

The CCP’s Administration of Internet Religious Information Services has banned unlicensed online groups or ceremonies, prohibiting foreign organizations or individuals from spreading religious content online. According to China Aid, a Christian NGO, Party censors search for and remove the words “Jesus” and “God” from internet posts.

Sanctions have also been brought against four members of the U.S. Commission on International Religious Freedom (USCIRF), which prepares reports on various countries. Apparently, Beijing was angry that the latest report alleged that China restricts religious freedom.

The CCP only recognizes five major religions, including Buddhism, Taoism, Islam, Catholicism, and Protestantism. Adherents may only practice these religions through CCP-approved organizations: the Buddhist Association of China, Chinese Taoist Association, China Islamic Association, National Committee of the Three-Self Patriotic Movement of the Protestant Churches in China, and the Chinese Catholic Patriotic Association.

The Constitution guarantees the right of belief, but not the right of worship. Consequently, the day, time, and place of worship must be approved by the Party. The five recognized religions are administered by the CCP’s United Front Work Department, which dictates the scripture and liturgy. Even the religious leaders, priests, and pastors must be approved by the CCP. Catholic bishops, for example, are appointed through the Party-run Bishops’ Conference of the Catholic Church in China. All religious leaders are required to support the Communist Party.

The Regulations on Religious Affairs (RRA) says that religions practiced in China must not be subject to foreign administration and influence. This is one of the reasons why the CCP has a particular issue with Catholicism. Not only is Catholicism governed by the Vatican, but the Vatican State and the Holy See recognize Taiwan.

Authorities closely monitor the activities of religious organizations. Under the Regulations on Religious Affairs (RRA), religious groups are required to register with the government. Religious schools or religious facilities also must have government approval. Religious gatherings outside of approved locations and times are prohibited.

Violators can be severely punished. According to Article 300 of the Criminal and Public Security Laws on “Cults,” “Whoever forms or uses superstitious sects … or cult organizations … to undermine the implementation of the laws and administrative rules and regulations of the state … shall be sentenced to fixed-term imprisonment of not less than seven years or life imprisonment and concurrently sentenced to a fine or confiscation of property.”

Members of the CCP are prohibited from belonging to a religious group. This prohibition has been extended to retired members of the Party.

In 2017, a CCP publication referred to religion as “spiritual anesthesia.” New regulations, adopted in 2020, require religious groups to incorporate Party ideology in their teachings. To this end, Xi Jinping Thought has been infused into the liturgy of the five approved religions.

Catholic churches have been torn down and had their crosses and statues removed. Images of Chinese leader Xi Jinping have replaced those of the Madonna (the Virgin Mary) and the Christ Child (Baby Jesus). And Xi quotes have been painted over the Ten Commandments.

Xi seems to be dedicated to becoming one of the three great leaders of communist China, alongside Mao Zedong and Deng Xiaoping. Xi has seized control of the Party, the government, the military, and the economy. Now that the CCP also controls religion, perhaps the three should be referred to as a “Trinity.”