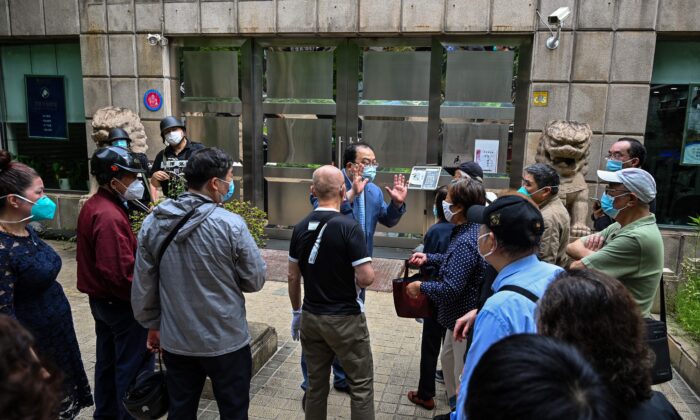 A worker talks to people who want to withdraw cash at the entrance of a bank in the Jing'an district of Shanghai on June 1, 2022. (Hector Retamal/AFP via Getty Images)
China Business & Economy

Bank depositors in several Chinese provinces have reported their bank and credit accounts have been frozen, actions seen as being related to bank runs in Henan and a nationwide mortgage boycott. Experts say this all indicates that China’s economy is in a very precarious state.

Mainland Chinese media Securities Daily reported on July 18 that some depositors in southern Hainan Province said their debit bank savings cards had been frozen. They reportedly could only make deposits but were unable to withdraw cash. Their online transactions were also restricted.

Similar situations have also reportedly occurred with many banks in other regions, including Beijing and Shandong, and other places.

A number of bank managers told Chinese media such moves were mainly risk control measures as part of a so-called “card breaking campaign” launched by the authorities in 2020 which supposedly targeted telecom fraud.

A customer service staff member at a major state-owned bank in Hainan said that the escalation of the “card breaking” is mainly aimed at accounts that may be involved in illegal trading, leasing, and lending of bank cards, as well as transfer and money laundering services for telecom network fraud activities.

Regarding how regular users’ accounts have also been frozen, the manager of a city commercial bank in Shandong told media: “Our branch has been ordered that the rate of sleeping accounts should not exceed 20 percent, and we must increase our efforts to inspect and clear them.”

A manager of a bank in Beijing further explained sleeping accounts to the media.

“They are accounts that have not had active transactions for more than three consecutive years, they have a current account balance of less than 10 yuan,” the manager said. “And they don’t have a signed credit card, personal loan repayment. Other collection and payment agreements will be inspected.”

The manager said such accounts are easily frozen “once an abnormal transaction occurs.”

But many depositors have complained on social media that their bank accounts were frozen for no reason, and they could not spend or transfer their money. They could only deposit money into their accounts.

According to posts on social media, banks that have frozen accounts include China Merchants Bank, Industrial and Commercial Bank of China, China Construction Bank, Agricultural Bank of China, and Ping An Bank.

Dr. Frank Tian Xie, from the University of South Carolina Aiken, gave an overview of what’s occurring in China.

“The abrupt freezing of bank and credit accounts in China comes at a time when bank runs and mortgage boycotts are becoming ever more frequent in the country where the real estate bubble is about to burst,” Dr. Xie said on July 20.

This has all occurred “after 20 some years of rapid and disorderly expansion,” he said.

Corruption has played a big part in it, Dr. Xie pointed out.

“The corruption and embezzlement-laden government officials at local and regional levels colluded with those fledgling township banks and real estate developers to transfer, often secretly and illegally, construction funds to risky financial products,” he said.

“This has led to the stoppage and termination of those pre-sold projects, which amounts to hundreds of thousands of units and mortgages,” he said.

“Those mortgagers, frustrated with the construction stoppage and their diminishing hope of moving into their apartments in the foreseeable future, opted to stop their mortgage payments altogether.

“This collective action, unheard of in recent Chinese history and very unusual under communist rule, damages deeply the banks’ reputation and is hurting their liquidity.

“When cash flow is tight, the only thing Chinese banks can do is to freeze and limit their depositors’ accounts and the credit cards they issued.”

“The banks are in the most difficult position now. They have lent out all the money, but now they cannot collect the money. If there is a run at this time, the banks will collapse. Now the risk is with the banks,” he told The Epoch Times on July 17,

“But how can the developers resume construction, and where will they get the funds for it? It’s like a dead game. At present, there is no solution now,” he said.

“The situation seems to be very serious as the funds of the banks are drained and dried up, due to embezzlement and inadequate supervision by the authorities,” he said.

“This financial turmoil is now spreading to over 25 provinces in China and it is soon going to cause damage to the second half of the year of the Chinese economy.

“And, if China steps into recession in the third quarter, which is almost certain, the world economy will also feel the pain as demand from China dries up.”

Lin Cenxin and Yi Ru contributed to the report.