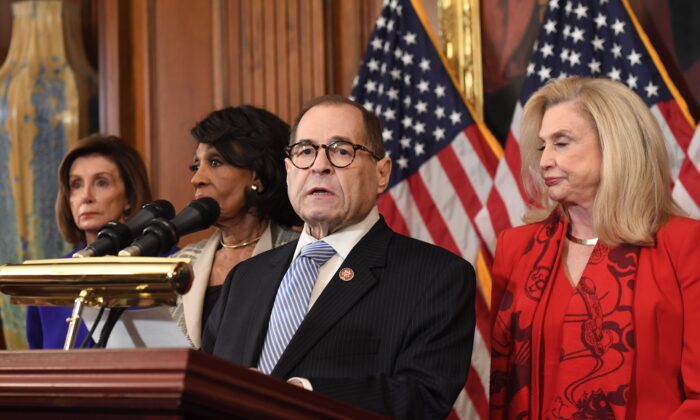 House Judiciary Chairman Jerry Nadler (D-N.Y.), speaks to announce articles of impeachment for President Donald Trump during a press conference at the Capitol in Washington, on Dec. 10, 2019. (Saul Loeb/AFP via Getty Images)
Politics

Reports: House Could Vote on Articles of Impeachment Next Week

The House of Representatives will possibly vote next week to impeach President Donald Trump after Democrats announced they have drafted two articles of impeachment, according to several news reports on Tuesday.

House Majority Leader Steny Hoyer (D-Md.) said Tuesday that Democrats will most likely vote on impeachment before Christmas. If so, it means the House will have to hold floor votes next week as the Christmas break starts the following week.

“Assuming that they … report out articles, my presumption is that we will be considering them before we leave,” Hoyer told reporters, according to The Hill.

Hoyer added to reporters that the House is also is looking to vote on reauthorizing Pentagon funding and the U.S.-Mexico-Canada Agreement trade overhaul. Government funding bills will be the priority.

“President Trump has acted in a manner contrary to his trust as President and subversive of constitutional government, to the great prejudice of the cause of law and justice, and to the manifest injury of the people of the United States,” the House resolution on articles of impeachment read.

The articles also alleged, “Wherefore, President Trump, by such conduct, has demonstrated that he will remain a threat to the Constitution if allowed to remain in office, and has acted in a manner grossly incompatible with self-governance and the rule of law. President Trump thus warrants impeachment and trial, removal from office, and disqualification to hold and enjoy any office of honor, trust, or profit under the United States.”

Democrats have claimed Trump abused his power by allegedly withholding millions of dollars in security assistance to Ukraine in exchange for investigations into political rivals. Trump and Ukrainian leaders have denied the allegations of quid pro quo.

The White House pushed back against the articles and said Trump will be exonerated in the Senate.

“The announcement of two baseless articles of impeachment does not hurt the President, it hurts the American people,” White House press secretary Grisham said in a statement. “The President will address these false charges in the Senate and expects to be fully exonerated, because he did nothing wrong.”

The House requires a simple majority vote to approve impeachment, while the Senate requires 67 out of 100 votes.