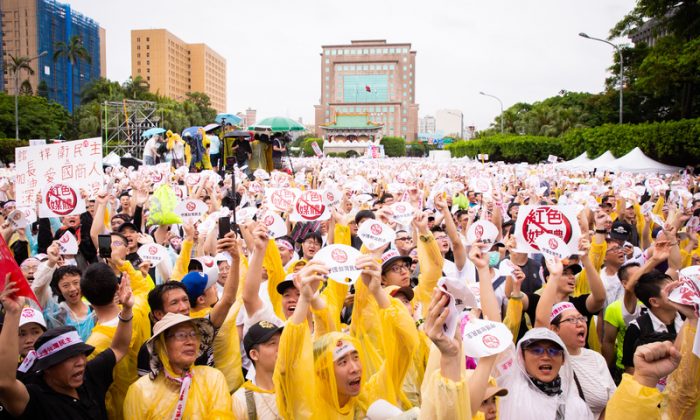 On July 19, Taiwanese media reported that Want Want China Times Media Group, a subsidiary of Taiwan-based Want Want Holdings, filed a libel case against Financial Times and its China correspondent Kathrin Hille at Taiwan’s district prosecutor’s office in Taipei. The media group alleged that an article by Hille about the Chinese regime’s meddling in the Taiwanese media landscape was “fake news.”

“China Times is abusing the regulation to harass a seasoned journalist whose works it dislikes,” said Cédric Alviani, head of RSF’s East Asia bureau, according to a July 24 statement.

Beijing has in recent years stepped up its efforts to influence Taiwan, a self-ruled island it considers a part of its territory.

Part of the Chinese infiltration efforts involves influencing Taiwan’s media industry with the goal of swinging public opinion on the island in favor of reuniting with the mainland.

According to a May report by the Varieties of Democracy Institute based at the University of Gothenburg in Sweden, Beijing spreads false and misleading information in Taiwan, including by providing funds to local media to adopt a more pro-Beijing line in their coverage.

The lawsuit against the Financial Times involves an article by Hille published on July 17. The article said that China’s Taiwan Affairs Office, a government agency tasked with handling cross-strait affairs, made phone calls every day to two Taiwanese pro-Beijing media—China Times newspaper and Chung T’ien Television (CTiTV) cable network—to give instructions on their China coverage and editorial positions.

The source of this information was unnamed journalists working at both media outlets, as well as reporters from two other unnamed Taiwanese newspapers.

“In 2006, Want Want acquired CTV [Taiwan-based China Television], and in 2008, the China Times and CTiTV. Since then, China Times has morphed from a mainstream publication into what critics call a mouthpiece of the Chinese Communist Party,” the Financial Times report said.

Alviani said that he believes the Financial Times article is “quite plausible, considering the flaunty pro-China allegiance of the Want Want group.”

RSF said that Hille was also a victim of harassing phone calls and messages after the article was published.

According to Taiwanese media, the media group also sued several other media outlets, including Central News Agency (CNA), for citing Hille’s article in their reports.

A March 2019 report by RSF said that China Times’ editorial practices changed dramatically after 2008 when it was bought by Want Want. For example, its coverage of human rights in China fell by two-thirds, from an average of 350 articles annually to fewer than 100, in the five years after the acquisition.

In another example, the report said that China Times did not send anyone to Hong Kong to cover the 2014 Umbrella Movement—a campaign that saw protesters camping out on the streets of Hong Kong’s main business district for two months demanding universal suffrage.

In June, CNA reported that China Times removed from its website all of its previous articles on the Tiananmen Square Massacre.

Hille’s article also pointed out that the Want Want China Times Media Group sent “several dozen reporters and editorial managers” to the southern Taiwanese city of Kaohsiung to “help push” the election campaign for Han Kuo-yu last November, when he was running for the city’s mayor.

Han ultimately won the mayoral seat and has since been nominated by Taiwan’s opposition party Kuomintang (KMT) to run as the party’s candidate in the 2020 presidential race.

The media group said it was common practice to receive subsidies from China, and denied that the money was tied to any political agenda.

According to CNA, Taiwan’s Mainland Affairs Council, an agency that deals with China issues, has announced that it will look into whether there was any political motivation behind these payments.