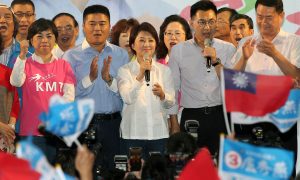 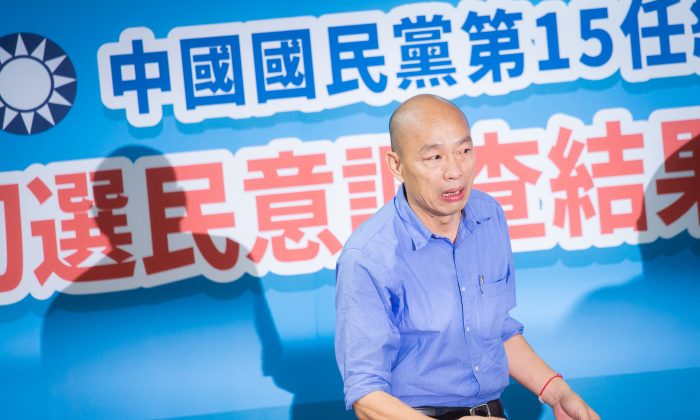 Han Kuo-yu, the China-friendly politician who was a surprise election winner for mayor of the Taiwanese city of Kaohsiung last November, defeated Foxconn founder Terry Gou to become the Kuomintang (KMT) party’s nominee to run in the 2020 presidential race.

Han,  62, will face incumbent Tsai Ing-wen of the Democratic Progressive Party (DPP), who is seeking reelection. The self-ruled island is set to hold its presidential election in January amid heightened tension with the Chinese regime, which considers Taiwan a renegade province and has threatened the use of military force to bring the island under its control.

Han topped four other contenders in a national tally for the KMT’s primary race on July 15.

According to local political commentators, there is a slight possibility that Taiwan’s main opposition party would select Gou as its nominee despite the poll results, as the KMT must first discuss the results within the party’s central standing committee on July 17, then give final approval for the nomination on July 28 at the party’s national assembly.

In a July 15 video posted on his official Facebook page, Gou didn’t make clear his next steps but said that “my resolution to dedicate myself to the Republic of China [Taiwan’s formal name] will never change.”

Gou may choose to run as an independent candidate, with Ko Wen-je, the current Taipei mayor, as his running mate, local commentator Huang Chuang-shia told Formosa TV on July 15.

Han, a lawmaker from 1993 to 2002, was born in New Taipei City, according to his online resume. He didn’t become widely known until the lead-up to the November 2018 elections, when a number of local offices in Taiwan were up for grabs.

Kaohsiung had been dominated by the DPP for two decades. Thus, it was widely expected that DPP candidate Chen Chi-mai, an experienced politician, would win the mayoral race.

Han ran on a campaign slogan of “make Kaohsiung rich and great,” promising that he would make the port city prosperous by increasing economic ties with mainland China, including by selling local vegetables and fruits to Chinese cities; bringing in more Chinese tourists; and not saying anything that Beijing dislikes.

He openly courted the attention of Chinese officials after he won.

On May 22, Han met with Wang Zhimin, director of Beijing’s representative Liaison Office in Hong Kong, according to Hong Kong media HK01.

Wang invited Han for dinner after meeting at his office in Hong Kong, HK01 reported.

“We had a very harmonious discussion. …We talked about our previous jobs, our lives, wives, children, the future of Hong Kong and Kaohsiung, and a lot of other things,” Han said at the time.

Foreign Policy magazine ran a June report analyzing Han’s campaign strategy on Facebook. He had an official account and a fan Facebook group, the latter which often posted Han’s talking points and memes, and spread fake news attacking Chen and the DPP government led by Tsai.

Those posts quickly spread to other Facebook pages, as well as other social media platforms popular with Taiwanese, such as Line and LinkedIn.

Foreign Policy found that the administrators of the Facebook group page were all individuals who joined the group a day after Han announced his candidacy in April last year.

The magazine also found that on LinkedIn, all three listed themselves as employees of Tencent, the Chinese tech giant that owns and operates China’s largest social media platform, WeChat.