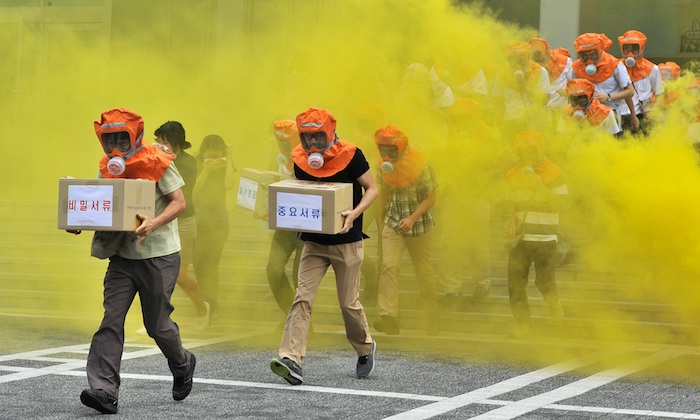 South Koreans run out of a building during a civil defence drill in Seoul on August 22, 2012. Researchers at Harvard’s Belfer Center for Science and International Affairs have published a report about North Korea’s biological weapons program that calls for better preparations. (JUNG YEON-JE/AFP/GettyImages)
Asia & Pacific

North Korea’s drive to create biological pesticides and fertilizers may be a cover for a biological weapons program, warn researchers at Harvard.

While North Korea basks in international horror over its ongoing nuclear program and its threats to wipe out Japan and the United States, the regime denies it has any biological weapons program to speak of.

But that claim is being challenged by several military and intelligence assessments used by researchers at the Belfer Center for Science and International Affairs at the Harvard’s Kennedy School.

In a new report, they find it likely that Kim Jong Un’s regime has a biological weapons program and urge South Korea and its allies to prepare for the possibility North Korea could use anthrax, smallpox, or other biological agents in the early stages of any armed conflict.

U.S. and South Korean military and intelligence reports have mapped out 13 biological agents the communist regime may possess, ranging from botulism and cholera to the plague.

The authors note that the threat of biological weapons is often overlooked amidst the growing threat of North Korea’s nuclear program.

But when Kim Jong Un’s half-brother was assassinated with VX nerve agent in February 2017, it brought renewed interest in North Korea’s other weapons of mass destruction programs.

“If used on a large scale, these weapons can cause not only tens of thousands of deaths, but also create panic and paralyze societies,” the report warns.

North Korea could drop biological agents from the drones it regularly files into South Korea, warn the authors.

Some biological weapons (BW) can also be delivered by airplane or introducing them into the water supply.

“It is theoretically possible that North Korean sleeper agents disguised as cleaning and disinfection personnel could disperse BW agents with backpack sprayers,” reads the report.

The authors say it is challenging to assess North Korea’s biological weapons capability because such weapons programs don’t announce their progress with earthquake-like rumbling the way nuclear bombs do when they are exploded underground.

“While nuclear programs can be monitored by the number of nuclear tests and the success of missile tests, weaponizing and cultivating pathogens can stay invisible behind closed doors.”

Part of the challenge comes from figuring out whether facilities designated for agriculture use have a dual purpose of producing or weaponizing biological agents.

Kim has emphasized agricultural reform as “the frontline of socialism,” including efforts to increase biological pesticide production.

Some analysts, notes the report, believe this could signal the isolated regime is expanding its biological weapons (BW) program.

The complex can produce thousands of tons of organic fertilizers, claims the regime, but photographs in the propaganda piece reveal it has facilities capable of producing military-sized batches of anthrax.

The report’s authors warn that limited information about North Korea’s biological weapons capability may lead to the illusion that the threat is low, thereby undermining preparations for a possible attack.

“Nonetheless,” reads the report “preparation against BW is urgent and necessary, which will also serve as defense against naturally occurring epidemics that increasingly threaten the 21st century.”

That response would see the military and intelligence communities working hand in latex glove with public health to detect and respond to such an attack with a well-coordinated crisis communication strategy and cooperation from an informed public.

The authors are also calling for better surveillance of North Korea’s BW program.