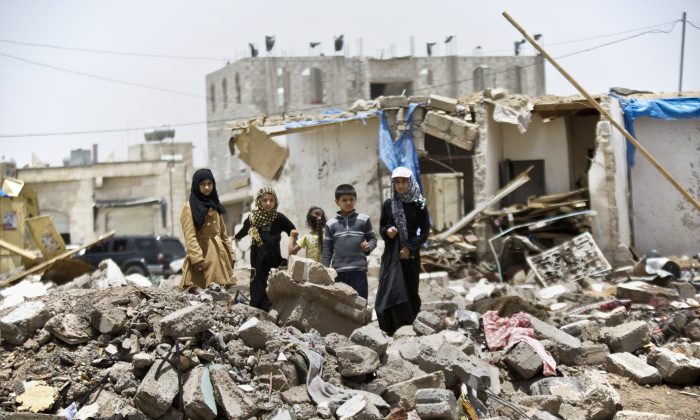 A boy and his sisters watch graffiti artists spray on a wall, commemorating the victims who were killed in Saudi-led coalition airstrikes in Sanaa, Yemen, Monday, May 18, 2015. (AP Photo/Hani Mohammed)
Middle East

BAGHDAD—U.S.-led airstrikes targeting the ISIS group in Iraq and Syria likely have killed hundreds of civilians, a report by an independent monitoring group said Monday. The coalition had no immediate comment.

The report by Airwars, a project aimed at tracking the international airstrikes targeting the extremists, said it believed 57 specific strikes killed at least 459 civilians and caused 48 suspected “friendly fire” deaths.

While Airwars noted the difficulty of verifying information in territory held by the ISIS group, which has beheaded journalists and shot dead activists, other groups have reported similar casualties from the U.S.-led airstrikes.

“Almost all claims of noncombatant deaths from alleged coalition strikes emerge within 24 hours — with graphic images of reported victims often widely disseminated,” the report said. “In this context, the present coalition policy of downplaying or denying all claims of noncombatant fatalities makes little sense, and risks handing (the) ISIS (group) and other forces a powerful propaganda tool.”

So far, the U.S. only has acknowledged killing two civilians in its strikes: two children who were likely slain during an American airstrike targeting al-Qaida-linked militants in Syria last year. That same strike also wounded two adults, according to an investigation released in May by the U.S. military.

Airwars said it identified the 57 strikes through reporting from “two or more generally credible sources, often with biographical, photographic or video evidence.” The strikes also corresponded to confirmed coalition strikes conducted in the area at that time, it said.

Other groups also have reported on major casualties suspected of being caused by the U.S.-led airstrikes. The Britain-based Syrian Observatory for Human Rights, which documents the Syrian conflict through a network of activists on the ground, said 173 Syrian civilians have been killed since airstrikes began.

They include 53 children under the age of 18. Most of the civilians were killed in airstrikes near oil refineries and oil fields in the northern provinces of Hassakeh, Raqqa, Aleppo and Deir el-Zour.

The deadliest incident was on May 4, when a U.S.-led airstrike on the northern ISIS-controlled village of Bir Mahli near Kobani killed 64 people, including 31 children, the Observatory said. A Pentagon spokesman at the time said that there was no information to indicate there were civilians in the village. The death toll was confirmed by other opposition groups in Syria.

Two videos and several photos purporting to show the aftermath of the strikes in the mixed Arab and Kurdish village showed children allegedly wounded in the airstrikes. A media arm of the ISIS group released those videos.

In another incident on June 8, an airstrike likely conducted by the U.S.-led coalition on the ISIS-held village of Dali Hassan, also near Kobani, killed a family of seven, the Observatory said.

Meanwhile, Turkey also has said it would investigate accusations by the Iraqi Kurdish regional government and activists with the Kurdistan Workers’ Party, or PKK, that its airstrikes were responsible for recent civilian casualties in the northern Iraqi town of Zargel.

Meanwhile Monday, the leader of Iraq’s Kurdish region, President Massoud Barzani, said Monday that Iraqi Kurds must maintain control of areas in northwestern Iraq, including the city of Sinjar, after they are recaptured from ISIS extremists.

His speech marked the anniversary of the fall of Sinjar to the Islamic State group, which forced tens of thousands of people from Iraq’s Yazidi minority to flee into the mountains. The incident prompted the U.S. to begin the airstrikes targeting the militant group.

Other Kurdish groups, including the PKK, and the People’s Protection Units claim Sinjar as part of their territory. Iraqi, Syrian and Turkish Kurds currently fight alongside each other to reclaim Sinjar.