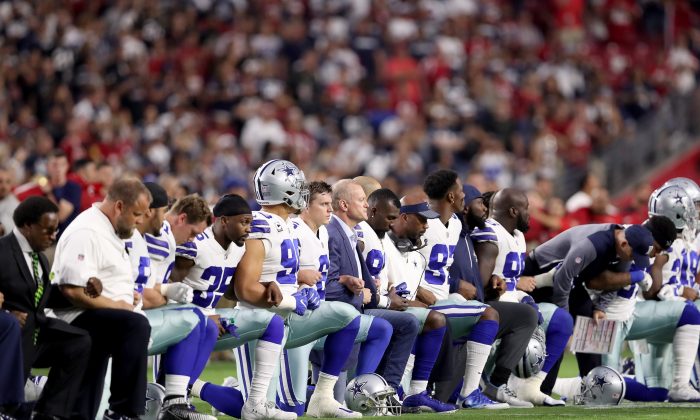 Members of the Dallas Cowboys take a knee before the start of the national anthem at an NFL game against the Arizona Cardinals at the University of Phoenix Stadium in Glendale, Arizona, on Sept. 25, 2017. (Christian Petersen/Getty Images)
Entertainment News

For years, television networks didn’t usually show much of the national anthem before games—until recently. This week, the NFL showed the anthem for just about every game.

But one staffer with a network, who remained anonymous, told Sporting News that TV crews were told to avoid crowd shots during the anthem because some fans might protest or boo the players down on the field. “In case they showed fans counterprotesting the protests,” the person said, identified by Sporting News as a “behind-the-scenes” staffer.

Audio mics on the field picked up heavy booing as the players took knees.

During the New England Patriots game in Foxborough, Massachusetts fans booed their own players. Some told them to “stand up!”

As the Dallas Cowboys took a knee before the national anthem and then stood up, ESPN play-by-play announcer Sean McDonough noted that “boos can be heard from this sellout crowd.”

Crews, however, didn’t show the fans.

“Fans booing Jets and Dolphins players were loud and clear during CBS’s telecast from East Rutherford, N.J. But we never saw them. Instead, we got a lot of field-level shots of linked arms players and saluting police officers,” the report stated. Something similar happened at the Giants-Eagles game at Lincoln Financial Field in Philadelphia.

The Detroit Free-Press reported that a number of fans booed before the anthem was sung—directed at players who were taking a knee.

“If crowd shots were indeed purposely avoided, it was a wise business decision by the networks not to bite the hand that feeds them their most popular programming, but a weak move from a journalistic standpoint,” Sporting News opined.

“By covering one of the most significant days in NFL history with rose-colored glasses, the networks cheated viewers. We got an incomplete picture of what really happened in stadiums on Sunday and Monday.”

But a CBS spokesperson, Jennifer Sabatelle, told the website that no one at the network was told to avoid the crowd.

“The anthem was covered by each crew in their own way, with many choosing to stay with what was happening on the field,” Sabatelle said. “There was no directive given to not show the fans.”

The anthem protests were triggered after President Donald Trump said over the weekend that any player who sits or takes a knee should be fired.

On Thursday, in an interview with “Fox & Friends,” the president said that NFL owners are “afraid” to do anything.

“The NFL is in a box and they have to do something about it,” Trump told Fox, adding, “I think they’re afraid of their players, if you want to know the truth.”

Trump, on Twitter, wrote that the NFL’s ratings are declining due to the protests.

“I have so many friends that are owners, and they are in a box,” Trump said. It’s been reported that several NFL team owners, including the Cowboys’ Jerry Jones, donated to him.

Around 200 NFL players protested in some way as the national anthem was sung.

Former San Francisco 49ers quarterback Colin Kaepernick ushered in the protests in 2016, and a few players followed suit last year. Kaepernick and other players have claimed they’re protesting police brutality in the wake of prominent officer-involved shootings around the United States and perceived racial injustice.

Sunday’s protests were the largest of their kind.