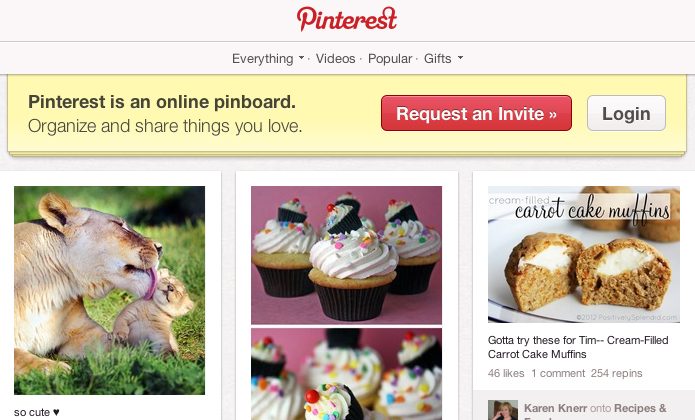 Pinterest's homepage is seen on April 8. (Screenshot via The Epoch Times)
Business

Report Says Pinterest is No. 3 US Social Media Site

Pinterest is a website that lets users “pin” and share stuff they are “interested in” on virtual corkboards; essentially allowing users to share the things they love with the Internet population. It was founded in early 2010, and now counts U.S. President Barack Obama as a user.

The Palo Alto, Calif.-based Pinterest’s online traffic has increased 50 percent from January to February, and now stands behind only Facebook and Twitter as the third most popular social media site in the United States by total visits. Which means, Pinterest’s traffic has exceeded heavyweights such as LinkedIn, Tumblr, and Google+.

Experian called Pinterest the “hottest social media startup since Facebook and YouTube.” That is high praise, but considering that the website is still technically in beta and is for now by invitation only, it’s safe to say that Pinterest’s growth has exceeded all expectations.

But Experian’s results are skewed because the data does not include mobile access from smartphones. However, this only affects the page-view tallies of Facebook and Twitter mostly, which claim the most app-based users. But those two sites are already far ahead of Pinterest.

VentureBeat, a publication for the venture capital space, estimated that Pinterest is worth around $550 million in a sale. It has 30 employees and more than $37 million in startup capital.

By scanning Pinterest’s website, most of the images and posts relate to food, fashion, and home decor. Not surprisingly, Experian found that over 60 percent of the site’s users are female, and 55 percent are in the 24-to-55-age bracket.

Pinterest co-founder Ben Silbermann explained, “To me, boards are a very human way of seeing the world,” he said at the South by Southwest Interactive conference in March, according to a transcript.

“The site is about helping people to discover things they didn’t know they wanted—things that feel like they’ve been handpicked just for you.”

According to Experian, most of the Pinterest users come from California, Texas, and the Midwest.