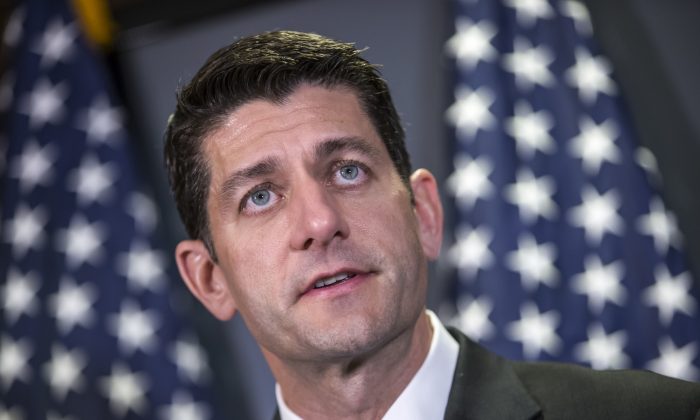 In this May 24, 2016 photo, House Speaker Paul Ryan of Wis. faces reporters at Republican National Committee headquarters on Capitol Hill in Washington. Congress has a long to-do list when lawmakers return from a seven-week recess Tuesday, but it’s unclear if much of it will get done. Presidential election politics will hover over all business in the month before lawmakers leave Washington again to go home and campaign. (AP Photo/J. Scott Applewhite)
US

Rep. Paul Ryan might step down as the Republican Speaker of the House, according to a report published Thursday.

Four House Republicans told The Hill that Ryan, who represents a district in Wisconsin, is expected to resign after Election Day on Nov. 8. They said that he faces a steep uphill battle to garner the 218 votes he needs to become Speaker.

But a spokesperson for Ryan said he isn’t going to step down from office. “He is running. The Speaker’s only focus until Election Day is defeating Democrats and protecting our majority, and nothing else,” Ryan spokeswoman AshLee Strong told the website. “He is running,” she also told the New York Daily News.

Mike Pence, the vice presidential nominee, declined to answer questions about Ryan on Thursday. “My respect for Paul Ryan is boundless,” he told the National Journal. “I’m not a member of the House Republican conference anymore. I wouldn’t presume upon what the members of the conference choose.”

Judge: No Evidence of Voter Intimidation From Trump Workers

When asked by CNN later as to whether he backs Ryan, Pence replied, “I do.”