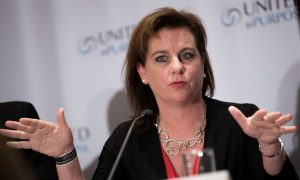 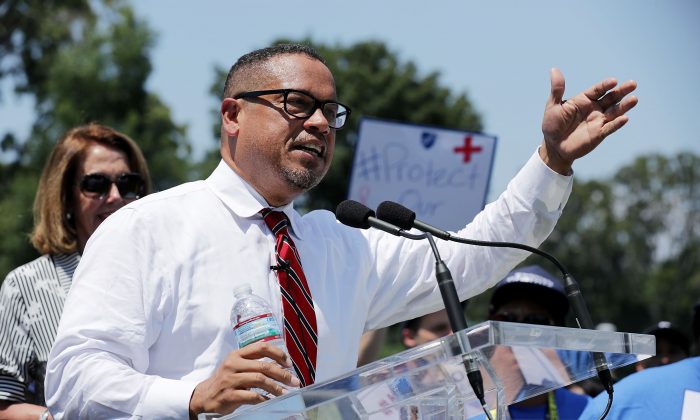 An internal report by the Minnesota Democratic-Farmer-Labor Party (DFL), which investigated the domestic-abuse claims against Rep. Keith Ellison (D-Minn.), has been sent to local law enforcement for further investigation after an attorney who was hired by the DFL found the claims unsubstantiated.

Ellison is alleged to have physically and verbally abused his ex-girlfriend Karen Monahan. Monahan has since provided medical records from 2017, when she told her therapist about the abuse on two separate visits. Her son, Austin, also confirmed witnessing the video in a lengthy Facebook post, detailing how he accidentally stumbled upon the video and how he confronted his mother about it.

Doug Wardlow, a Republican who is running against Ellison to be the state’s attorney general in next month’s upcoming general election, chastised the DFL over the report and accused the party of protecting Ellison.

“As predicted, the sham ‘investigation’ led by the DFL party attorney’s legal partner has concluded in favor of the party’s Attorney General candidate. But the publicly available evidence contradicts that conclusion,” Wardlow said in an Oct. 1 statement. “Karen Monahan’s allegations are substantiated by documentary evidence and a witness.”

The DFL has refused to publicly release the report that was produced by Susan Ellingstad, an attorney who was hired by the party. But a copy of the report obtained by the Associated Press revealed that Monahan wasn’t willing to release the video of the incident, when Ellison allegedly pulled her off her bed and hurled insults at her.

According to the report, Monahan gave multiple reasons to Ellingstad why she couldn’t release the video, adding that she “ultimately refused to show me the video, stating that she has been bullied on social media over the videotape and has decided not to cave to the pressure.” The attorney also reviewed a number of documents in her investigation, such as texts sent between Ellison and Monahan, handwritten notes by Monahan, and social media postings, among others.

“She [Monahan] has stated that the videotape is embarrassing and traumatizing for her, and that she should not have to ‘prove’ her allegations with a tape,” wrote Ellingstad.

The attorney said that without viewing the video, “an allegation standing alone is not necessarily sufficient to conclude that conduct occurred.”

Ellison has denied the abuse claims and also the existence of the video.

DFL Chairman Ken Martin said in a statement that the investigation was forwarded to local authorities “to let them review the contents and determine whether further investigation is warranted.”

In response to the report, former Ramsey County Attorney Tom Foley called for a criminal investigation into Ellison’s conduct.

Meanwhile, Ellison described the probe as a “thorough, independent and fair review.”

“Addressing this allegation has been especially challenging given the important national moment we are in,” Ellison said in an Oct. 1 statement. “I believe women who come forward must be heard, and to have their allegations fully investigated.”

But Monahan hit back at the report on Twitter, adding that she’s already shared more than she had planned to do.

Almost all high-ranking Democrats have remained silent over the claims against their colleague Ellison, who also serves as the deputy chair of the Democratic National Committee (DNC).

Monahan also condemned Ellison for lying in a separate post.

“Why is Keith Ellison putting the DFL, DNC, the people of MN and his family through this? Keith knows every word I said was true. It is abusive and re-victimizes survivors. People will sell their soul for power,” she said.