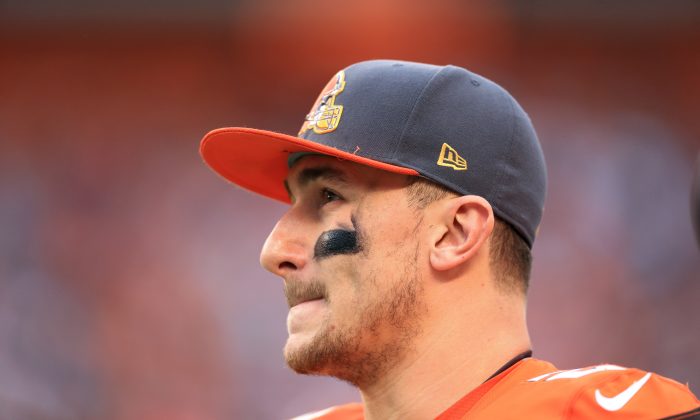 Free agent quarterback Johnny Manziel is still unsigned. Whether any NFL team takes a shot on him remains to be seen. (Andrew Weber/Getty Images)
NFL

Plagued by scandals amid a turmultuous off-season that left his NFL career in shambles, Johnny Manziel seemingly ran out of options.

But it appears the former Cleveland Browns and Texas A&M quarterback wants to get his life in order by finishing his degree.

According to a report from The Dallas Morning News, Manziel, 23, enrolled in classes at his university. He’s currently listed as a senior.

The Heisman Trophy winner left for the NFL before he finished his degree in recreation, parks and tourism sciences. It’s unclear how many hours of classes he will be taking this semester.

Users on the social media app Snapchat said they spotted Manziel on campus this last weekend, the Dallas News reported. Meanwhile, one person took a screenshot of a class message board that included an “Introduction” from a user named “Johnathan Manziel.”

CAN SOMONE CONFIRM THIS !!!!!!!! pic.twitter.com/3AeczjjnlY

“I am an RPTS major and have been out of school a couple of years, but I’m trying to get back on track so I can graduate,” the message read. It’s unclear if the message was actually written by Manziel, as he didn’t confirm it.

Manziel was drafted by the Browns after a stellar college career, but he was cut by the Browns in March after two subpar seasons. He’s currently awaiting trial in Texas on a misdemeanor assault charge that stemmed from an alleged domestic incident with his ex-girlfriend. In February 2015, Manziel entered rehab, but toward the end of the 2015-2016 NFL season, he “showed up drunk to practice,” according to reports earlier this year.

Since then, Manziel has been spotted inside various nightclubs, becoming fodder for entertainment news website TMZ. He was also sued several times for property damage, according to The Dallas News.

In June, Manziel’s father, Paul, described his son as a “druggie,” who should go to jail. “He’s a druggie. It’s not a secret that he’s a druggie,” Paul Manziel told ESPN. “I don’t know what to say other than my son is a druggie and he needs help. He just hasn’t [sought] it yet. Hopefully he doesn’t die before he comes to his senses. That’s about all you can say. I don’t know what else to say.”

“I hate to say it but I hope he goes to jail. I mean, that would be the best place for him. So we’ll see.”

Paul Manziel said the family has attempted to help Johnny, but they claimed he hasn’t been cooperative.