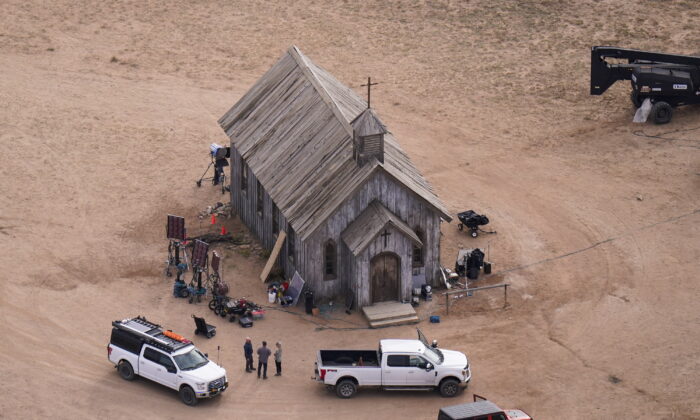 This aerial photo shows the Bonanza Creek Ranch in Santa Fe, N.M., on Oct. 23, 2021, where cinematographer Halyna Hutchins was shot and killed on the set of the film “Rust.” (Jae C. Hong/AP Photo)
Entertainment News

A report into possible workplace safety violations that occurred on the set of the film “Rust,” where cinematographer Halyna Hutchins was killed in October 2021, is reportedly “on track” to be released on April 21, officials have said.

The report is being carried out by the New Mexico Environment Department (NMED) and the incident is still being investigated by authorities in Santa Fe County.

Under New Mexico law, the state’s Occupational Health and Safety Bureau, which is a division of the Environment Department, must file citations against the movie’s producers within six months of the incident, Deadline reports.

“We are on track to release the report by the April 21 deadline,” Matthew Maez, a spokesperson for the New Mexico Environment Department, told Deadline. “I don’t have details about the report findings to share at this time.”

Hutchins, 42, was fatally shot on Oct. 21, 2021, when actor Alec Baldwin, 63, pointed a 45 Long Colt revolver in the direction of the cinematographer and director Joel Souza while rehearsing a gunfight scene.

The revolver discharged a live round, killing Hutchins and wounding Souza, 48.

Baldwin hasn’t been charged with a crime in connection to the shooting. The actor maintains that he was pointing the gun at Hutchins at her instruction and that it fired without him pulling the trigger.

In an interview with ABC News in early December, Baldwin said, “The trigger wasn’t pulled. I didn’t pull the trigger,” and that he “let go of the hammer and ‘bang’ the gun goes off.”

But some gun experts, including Michigan-based firearms expert Steven Howard, have argued that the likelihood of a gun firing without the trigger being pulled is “very, very rare.”

Baldwin is now facing multiple lawsuits over the incident including those brought by script supervisor Mamie Mitchell, who called emergency services after Hutchins was shot, and head of lighting Serge Svetnoy, who accused the actor and producers of “general negligence.”

Shortly after the fatal incident, New Mexico state Sen. Cliff Pirtle introduced Senate Bill 188 which would require that all individuals employed by a film production company in the state, where firearms are present on set, must have a “valid certificate of competency in the safe handling of firearms pursuant to the Hunter Training Act.”

Meanwhile, the Santa Fe County Sheriff’s Office is continuing to investigate the incident. Charges and arrests have not been made against anyone in connection with the shooting, although criminal charges have not been ruled out.

Baldwin confirmed in February 2022 that he has returned to work on movies following a temporary hiatus after the fatal incident.

“I haven’t worked since October 21 of last year when this horrible thing happened on the set of this film and the accidental death of our cinematographer Halyna Hutchins,” the actor was quoted by the Hollywood Reporter as saying. “I still find that hard to say. But I went back to work today for the first time in three and a half months.”