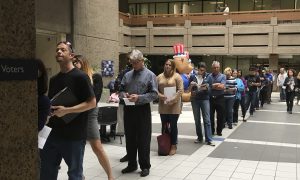 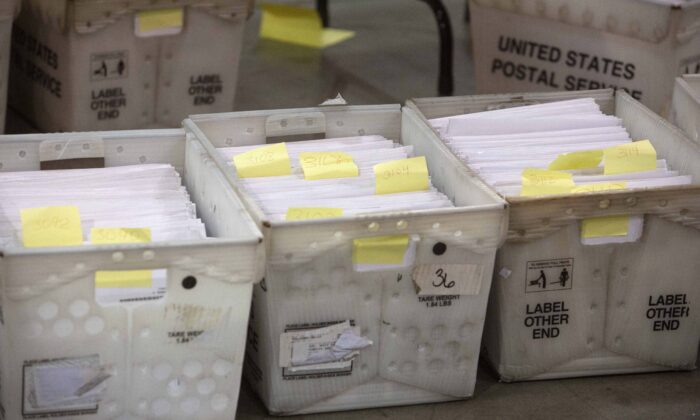 Election ballot baskets sit on the floor at the Supervisor of Elections Service Center in Palm Beach, Fla., on Nov. 18, 2018. (Saul Martinez/Getty Images)
US News

An audit by a right-leaning nonprofit flagged nearly 24,000 voter files in Florida’s Palm Beach County because of issues that include registrations in multiple states, double voting, voting on behalf of the dead, and registrations by “apparent” noncitizens.

“The issues found indicate that efforts at list maintenance over the years have either been lax, inconsistent, ignored or ineffective,” the Public Interest Legal Foundation (PILF) stated in a November report (pdf).

Palm Beach County, where nearly 967,000 voters were registered as of Nov. 1 (pdf), was criticized after the 2018 midterms for failing to complete state-mandated recounts by the deadline.

The county’s then-elections chief, Susan Bucher, was rebuked by a judge for allowing her staff to duplicate improperly completed ballots. By state law, the task can only be entrusted to the canvassing board, which must include a county court judge.

The new governor, Republican Ron DeSantis, suspended Bucher and appointed West Palm Beach attorney Wendy Link. Link obtained more than $15 million from the county commission to get new voting machines, vote scanners, and other equipment that should be ready for the 2020 election, the South Florida Sun Sentinel reported.

The PILF report, however, suggested that weaknesses already “baked into the voter registry” need to be addressed.

It found more than 20,000 registrations, for example, of voters who were also registered in New York, Pennsylvania, and Rhode Island. PILF didn’t cross check the data with other states.

Also, more than 2,200 active registrations matched records of apparently deceased people, based on the Social Security Death Index. Of those, more than 100 “actually cast ballots in recent elections in Palm Beach County after their dates of death.”

Moreover, the audit revealed 413 voters were registered twice, and “some” also voted twice.

The audit also discovered 68 registrations that were canceled because the people later admitted they weren’t U.S. citizens.

“Noncitizens usually become aware of their voter status during an immigration procedure,” the report stated. “Prospective naturalized citizens are often confronted with their pre-existing voter registration records, causing great alarm and a rush to quickly cancel their registration.”

Still, PILF found several people who skipped the citizenship question on their voter registration form, or even filled in they weren’t citizens, but were registered anyway. Some of them also voted, even repeatedly.

One issue that may be adding to the problem is that the voter registration database, by default, checks “YES” to the citizenship eligibility box in the system, so the staff needs to manually uncheck the box “if, in fact, the box is unchecked on the actual application before them,” the report noted.

“Every effort should be taken to educate staff that eligibility questions should be reviewed as carefully as other questions. When these systems fail, it is the immigrant—not the data entry staff member—who suffers potential criminal and deportation consequences.”

The audit also found that 68 voters registered with addresses of commercial or government buildings, such as a post office or a UPS store.

The report highlighted that the county’s voter rolls aren’t “accurate and current,” as required by Florida law.

This raises the concern of voter fraud, especially because “under Florida law, a registered voter can call or write the Supervisor’s office and request a mail-in ballot for any reason,” the report stated. “The caller need only provide a name, address, and date of birth in order to receive a ballot by mail.”

Inaccurate rolls also add to the potential for damage caused by a cyber intrusion, PILF argued, since officials may have trouble discerning between data deletions or manipulations by hackers and “pre-existing defects.”

“Reasonable and proper voter list maintenance requires ownership of, and sweating the small details,” the report stated. “Each weakness baked into the voter registry is now an election security threat.”

PILF said it submitted its findings to Link, the county supervisor of elections, in May “for a line-by-line review, to discern necessary list maintenance efforts according to federal and Florida statutes.“

While cases of voter fraud have been known to pop up across the nation, the real scope of the issue is unclear.

Texas Attorney General Ken Paxton said he thinks the problem is “quite prevalent across the nation” and “definitely prevalent in Texas.”

“But these cases take a lot of resources,” he told Epoch Times senior editor Jan Jekielek in the May 22 episode of “American Thought Leaders.”

Multiple nonprofits have been trying to clean up voter rolls across the nation. Judicial Watch reached three statewide settlements in recent years with California, Ohio, and Kentucky to remove millions of ineligible voters from their rolls.

Los Angeles County, in particular, agreed to remove as many as 1.5 million inactive registrations.

Still, as of Feb. 8, there were nearly a million ineligible voters registered in California, according to estimates by the Election Integrity Project California, which was a party to the Judicial Watch settlement.