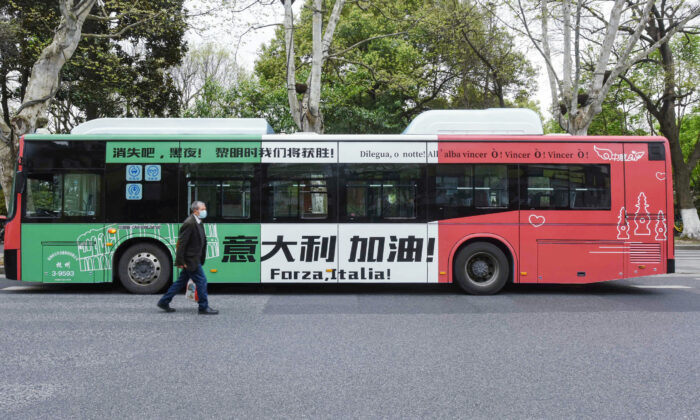 A man walks past a bus with a message supporting Italy in their efforts against the COVID-19 coronavirus in Hangzhou in China's eastern Zhejiang Province on March 24, 2020. (STR/AFP via Getty Images)
International Relations

The Chinese Communist Party (CCP) aims to sway Italian leaders and prominent figures so as to mold policy and public opinion in its favor, says a new report.

The CCP’s activities in Italy are part of a broader plan to expand the party’s influence globally, says the report published on Nov. 20 by researchers at Sinopsis, a project by non-profit AcaMedia z.u., in collaboration with the Department of Sinology at Charles University in Prague—and the Global Committee for the Rule of Law “Marco Pannella”.

The report (pdf), titled “Hijacking the mainstream,” delves into the CCP’s foreign agencies and its operations to influence Italian politics from the national to the municipal level, targeting members of Parliament, political parties, officials, as well as leading figures from the media and think tanks.

According to the paper, the CCP’s influence in foreign countries helps further its foreign policy objectives, while protecting and cementing its “authoritarian monopoly of power” in China.

As a result of the regime’s manipulation, Italian influential voices have been used as proxies to echo CCP propaganda while normalizing Chinese totalitarianism and global expansion, according to the report. Members of parliament have also passed on “propaganda whitewashing the party’s human rights abuses,” says the report.

China has “a dedicated apparatus embedded in party, state, army and satellite structures uses proxies and neutral-looking platforms to coopt [sic.] élites abroad into alignment with the party’s external and domestic policies,” it says.

As stated by the report, China dedicates as much effort to developing formal diplomatic relations between states as to activities outside normal channels, “by-passing diplomacy to influence states.” This follows a Leninist tradition of establishing “friendly contacts” with foreign elites.

Hijacking the mainstream: CCP influence agencies and their operations in Italian parliamentary and local politics https://t.co/mXzTKcHKZm Policy brief by Sinopsis and the Global Committee for the Rule of Law “Marco Pannella”.

The International Liaison Department (ILD) targets foreign politicians, academics, and NGOs to build relationships and exchanges aside from formal diplomacy. The Chinese Association for Friendship with Foreign Countries focuses on influencing local governments and organizations at provincial and municipal levels. The China Council for the Promotion of International Trade aims to develop connections with foreign businesses and legal firms. Other party propaganda units and united fronts are associated with the CCP intelligence apparatus.

Parliament is one of the main fields where the CCP focuses its influence efforts by establishing allies on both sides of politics. While it has supporters of the regime’s policy, it also recruits people to be skeptical towards aspects of Chinese policy. The goal is to give credibility to the supporter’s arguments by showing that there are opponents, the report writes.

The research found that in Italy, ILD and other agencies have concentrated on forming a “friendly mainstream partner group,” in the Parliament that ultimately served to promote CCP propaganda, drawing respectability from the participation of skeptics.

To offset Chinese influence attempts, Sinopsis recommended for the Italian government and political parties to avoid interaction with CCP agencies, and to reject exchanges or agreements with Chinese counterparts that focus on propaganda or attempt to co-opt leaders.

The investigative group also advises parliamentarians against participation in “China friendship” groups connected to CCP’s agencies and recommends they decline invitations from such agencies. They also argue in favor of investigating CCP influence operations and legislating to resist foreign interference.