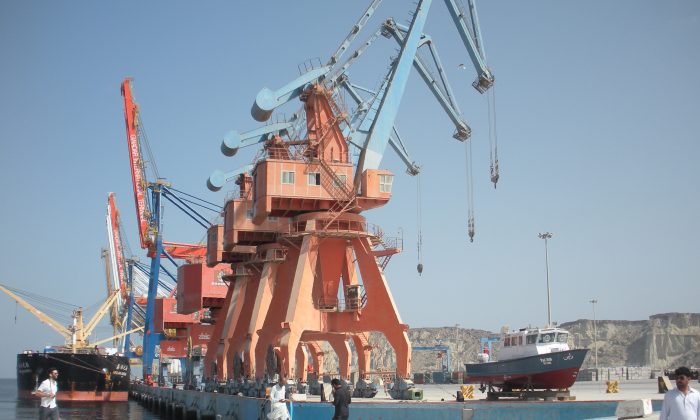 Laborers walk through the Gwadar Port in Pakistan, a multi-billion dollar infrastructure project that China has invested in, as part of the latter's 'One Belt, One Road' initiative. (Amelie Herenstein/AFP/Getty Images)
Chinese Regime

China’s ambitious One Belt, One Road (OBOR, also known as Belt and Road) initiative is an exercise in building up geopolitical influence. The Chinese regime has used the historical imagery of the Silk Road trade route as the rationale for partnering with more than 60 countries across Asia, Europe, and Africa on massive infrastructure projects.

The projects have increasingly drawn scrutiny, however, with some countries concerned that the Chinese regime could be using the program to buy political allegiance and further its geopolitical interests.

A newly published report by the U.S.-based think tank Center for Global Development says that some OBOR-participating countries could be at great risk of going bankrupt as a result of future financing related to OBOR projects.

The center analyzed the risk of debt distress—having securities that have defaulted or are moving toward bankruptcy—among 68 OBOR-participating countries, and found that 23 countries were “significantly or highly vulnerable to debt distress,” while eight were “of particular concern.”

Pakistan is one of the centerpieces of OBOR. The Chinese regime has planned a China–Pakistan Economic Corridor with energy, transportation, and other projects valued at $62 billion, according to the Center for Global Development report. Despite the promises of economic opportunity, the odds seem to be stacked heavily in China’s favor. China has charged high-interest rates on some of the loans. The International Monetary Fund estimates that this could lead to a public debt-to-GDP ratio of “well above 70 percent,” the report noted.

Last November, Pakistan official Mir Hasil Bizenjo revealed that the country would have to pay $16 billion in loans from Chinese banks at an interest rate of over 13 percent, in order to develop the Gwadar port, a deep-water port considered a major feature of the China–Pakistan Economic Corridor. As part of the 40-year deal, China will get a 91 percent share of gross revenues and an 85 percent share from the surrounding “free zone,” according to a report by Hong Kong-based publication Asia Times.

In several instances, countries have had to cede controlling rights to China when they were unable to pay back the loans. For example, Sri Lanka was unable to service an $8 billion loan with 6 percent interest for building the Hambantota Port. In July 2017, China and Sri Lanka signed an agreement to cede controlling interest to a Chinese state-owned company in exchange for writing off the debt, giving China a 99-year lease, according to the report.

In Laos, one of Southeast Asia’s poorest countries, OBOR projects have brought a heavy financial burden: The China–Laos railway will cost $6 billion, or about half of the country’s GDP.

Among the other high-risk countries identified by the report, an alarming percentage of debt is owed to China. Djibouti, the site of China’s only overseas military base, owes nearly 82 percent of its external debt to China, while Kyrgyzstan’s percentage of external debt to China is likely to grow from 37 percent in 2016 to 71 percent in the coming years, according to the report. Meanwhile, Tajikistan’s debts to China account for almost 80 percent of the country’s increase in external debt between 2007 to 2016.

Because of China’s bad track record in managing debt distress, the report recommended that international financial institutions like the World Bank hold China to established lending standards. They “should work toward a more detailed agreement with the Chinese government when it comes to the lending standards that will apply to any BRI [Belt and Road initiative] project, no matter the lender,” it said. The report did not explain what leverage the World Bank or other similar institutions would have to compel China to agree to any such protocols.

Countries are also scaling back on OBOR investments. In November, Pakistan dropped a $14 billion deal to build the Diamer-Bhasha Dam as part of the economic corridor, citing financing concerns, according to Pakistani newspaper The Express Tribune.

But the newly elected government has since expressed doubt over New Zealand’s participation. “I do regret the speed with which the previous government signed up,” said New Zealand foreign minister Winston Peters during a recent visit to Australia, according to a report by Australian broadcaster SBS.

“I do not feel we should be bound because the previous government signed up to something,” Peters added.

Zhang Ting contributed to this report.