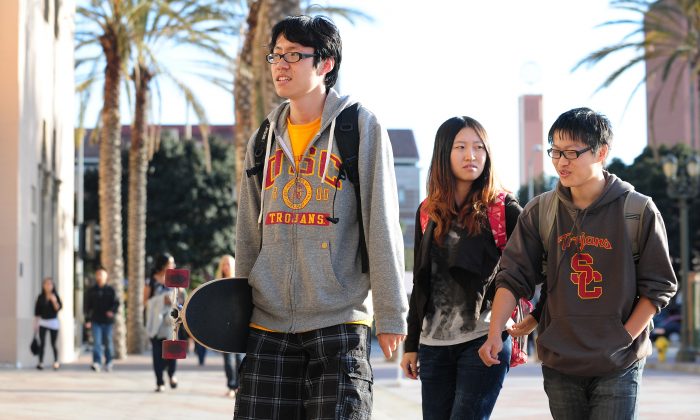 Chinese regime officials have issued a secret order that forbids children of high-ranking Communist Party officials from studying in the United States, and also directs that those already abroad must be repatriated by the end of the year, according to a Japanese report.

The Japanese edition of the Business Journal reported on Oct. 1 that the instructions came after the Chinese Communist Party (CCP) reacted with alarm to U.S. President Donald Trump’s Aug. 7 statement that “almost every student that comes over to this country is a spy.”

Trump made the statement in indirect reference to China while hosting CEOs and senior White House staff at a dinner, according to an Aug. 8 Politico report. At the event, the president also discussed the CCP’s “One Belt, One Road” international investment program, which he said had the potential to disrupt world trade, an attendee told Politico.

At a Senate Committee on Foreign Relations hearing on July 24, Dan Blumenthal, director of Asian studies at the American Enterprise Institute (AEI), recommended that the U.S. government impose visa limitations on the children of the CCP elite as a means of economic pressure.

The United States and China have been engaged in a high-intensity trade war since July, with both sides slapping tariffs on tens or hundreds of billions of dollars’ worth of imports. Washington has accused the Chinese regime of longstanding protectionism and massive theft of intellectual property from American companies.

Of the more than 1.2 million international students in the United States, about 330,000 are from China. That makes China the top country of origin for foreign students at U.S. colleges and universities, according to a recent study on Beijing’s influence on American academia. China was ranked first for eight consecutive years.

Since the late 1990s, growing numbers of Party officials’ children have emigrated to the United States. In 2012, Lin Zhe, a professor from the CCP’s Central Party School and a member of the National People’s Congress, said that 1.18 million senior officials’ spouses and children had emigrated between 1995 and 2005.

Xi Mingze, daughter of Chinese leader Xi Jinping, attended Harvard University from 2010 to 2014 under a pseudonym; she returned to China upon graduation and lives in Beijing with her parents. In 2012, Business Insider reported that Xi Mingze spent her time in the United States under round-the-clock protection by Chinese bodyguards and the FBI.

The United States is the most popular destination for the children of high-ranking Party officials. In 2011, a netizen asserted on Chinese social media that almost 75 percent of ministerial-level Party officials had children who held U.S. citizenship or permanent residency, and that the number jumped to 91 percent among their grandchildren. The post was removed by censors within a minute of its publishing.

In December 2014, Hong Kong’s Apple Daily reported that the United States is also the No. 1 destination for corrupt Chinese officials who fled. Over 7,000 fugitive Chinese, with personal assets worth almost $50 billion, were living in the United States, the report said.

A study by the Chinese Academy of Social Sciences said that 18,000 corrupt officials escaped from China between 1990 and 2008, taking within them 800 billion yuan (about $116 billion).