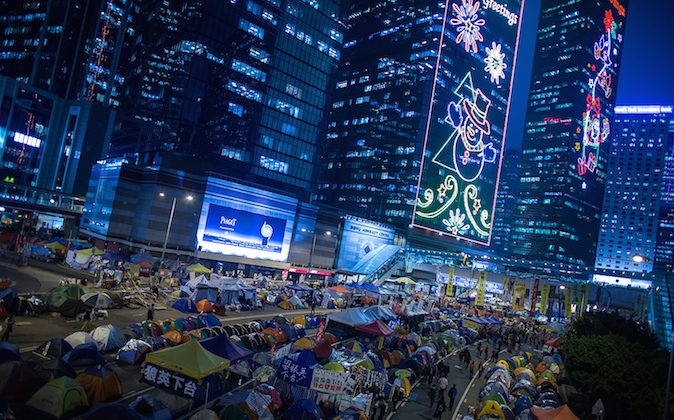 The occupation phase of the Umbrella Movement could be over. Whether it will be by police or protester action is the only question that remains.

Hong Kong police intend to meet with court-authorized bailiffs and plaintiffs next Monday and Tuesday to discuss the clearing of a major protest site in Admiralty as per a high court injunction order granted to the All China Express Limited bus company, reports Radio Television Hong Kong (RTHK).

This means that the occupied sections of Harcourt Road and Connaught Road Central, which pro-democracy demonstrators dub “Umbrella Square,” could be dismantled by the police as soon as Wednesday, Dec. 10.

Police expect to drive the student protesters from the last main protest site within a day, but note that cleaning the area would require more time, according to RTHK. After the removing barriers and others obstructions, police plan to patrol the occupied areas to prevent reoccupation attempts.

Meanwhile, student leaders from two groups, the Hong Kong Federation of Students and Scholarism, are mulling whether to stay or leave the city streets. HKFS spokeswoman Yvonne Leung told local radio that the group hopes to come to a decision by next week.

The students have been holding onto the sizable Admiralty site and a small encampment in Causeway Bay for over two months. A major occupied area in the commercial district of Mong Kok was cleared by the police the last week of November.

Scholarism’s leader Joshua Wong said on his social media accounts that his group will discuss and coordinate with the HKFS on the decision. The prominent 18-year-old and four other Scholarism members started a hunger strike this week to try to force the government to resume talks over the students’ demands for democratic reform in Hong Kong.

On “withdrawing or not withdrawing, any tactics, any methods will be considered,” Tommy Cheung, a HKFS member, told reporters. “The federation will discuss the next step in our plan. … At the moment there’s no clear-cut decision.”

The talk of retreat comes after the co-founders of pro-democracy group Occupy Central with Love and Peace, which played a role in the Umbrella Movement early on in the protests but slowly fell out of the spotlight, called this week for the students to end the protests to avoid further violence.

Police have been caught lashing out at the peaceful, nonviolent students with batons, riot shields, and pepper spray in the numerous standoffs during the protests.

The Occupy Central leaders, professors Benny Tai Yiu-ting and Chan Kin-man and Pastor Chu Yiu-ming, and about 60 supporters turned themselves into police Wednesday in a symbolic move to show they wanted to move on to a new phase of the movement. Police let them go, but could still press charges.

Umbrella Movement protesters are demanding that Hong Kong citizens be allowed to pick the candidates for the 2017 Hong Kong Chief Executive elections and elect their top leader via universal suffrage.

Presently, Beijing screens two or three candidates for a small pro-Beijing elections committee to select. Hugely unpopular, the current Chief Executive, Leung Chun-ying took office with a mere 689 out of 1,200 votes, a fact Hongkongers often bring up to mock him.

Whether by retreating or by being driven off, losing “Umbrella Square” would be a blow to the Umbrella Movement given its symbolic role in the protests.

Back when the protests began, the police use of batons and tear gas in Admiralty on September 28 inspired tens of thousands of Hong Kong citizens to join the student protesters in civil disobedience giving the Umbrella Movement global attention.

With over 2,000 tents, numerous works of art, and countless banners, the Admiralty site has a youthful, creative vibrancy and color.

Nightly speeches from the main makeshift podium have both inspired camaraderie and engendered divisions in the pro-democracy protester community.

The site has also drawn plenty of curious onlookers and tourists interested in the protests and a good photo-op, as well as an occasional international celebrity or two.

Even if the Admiralty site goes, the Umbrella Movement is unlikely to die off if the protesters show the tenacity of the Mong Kok protesters.

After their Argyle Street and Nathan Road encampment was cleared, Mong Kok protesters started the “Gau Wu” (Chinese for “shopping”) or “Shopping Revolution.” Using “cat-and-mouse” tactics, protesters gather on sidewalks to attract a substantial police group before disbanding and regrouping in another street or even a different district, and in the process, stretching out police resources.

By adopting the late Hong Kong martial artist and actor Bruce Lee’s advice to “be like water,” the Umbrella Movement might persist beyond the end of the occupation phase.