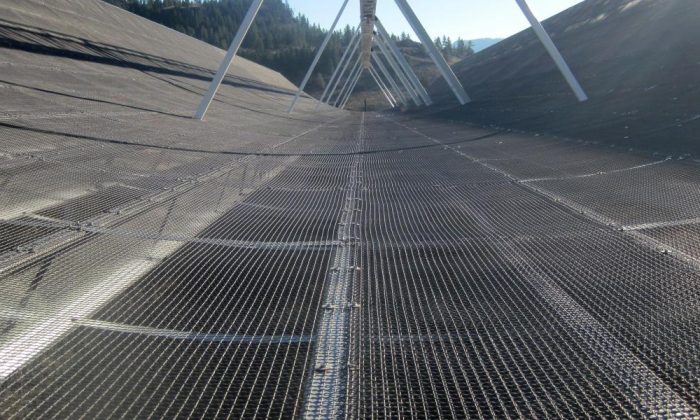 CHIME, a radio telescope, was designed and built by scientists at the University of British Columbia, McGill University, the University of Toronto, the Perimeter Institute for Theoretical Physics, and the National Research Council of Canada. (UBC)
Space

Scientists have said that they have observed blasts of radio signals coming from deep in space.

Researchers at the University of British Columbia in Canada said they’ve discovered the second so-called “repeating fast radio burst” (FRB) ever recorded, according to a news release published Jan. 9. The latest discovery brings scientists a step closer to figuring out where the pulses come from.

They said the finding provides new details about the “puzzling” yet “brief” radio energy from outside the galaxy.

“Until now, there was only one known repeating [fast radio bursts]. Knowing that there is another suggests that there could be more out there. And with more repeaters and more sources available for study, we may be able to understand these cosmic puzzles—where they’re from and what causes them,” said Ingrid Stairs, a researcher at the university, in the news release.

Stairs added: “Knowing where they are will enable scientists to point their telescopes at them, creating an opportunity to study these mysterious signals in detail.”

The researchers said that studying the fast radio bursts is a difficult task because they’re rare and only occur once.

In the latest one, there were a total of 13 bursts detecting in summer 2018, said the university’s news release, saying the telescope wasn’t running at full power.

The repeating signals are brief but powerful phenomena, and they are estimated to be energetically comparable to the total output of the sun over 100 years, Space.com noted.

They only last a few milliseconds before disappearing and come from distance places in the known universe. The first was discovered in 2007.

“When these bursts happen once only, it’s really hard to figure out what created them,” Cherry Ng, with the University of Toronto, told The Verge. “Now we’re showing, no, at least one other repeats.”

“The findings are just the beginning of CHIME’s discoveries,” added Stairs.  “In the next phase, we plan to capture the full high-resolution data stream from the brightest bursts, which will let us better understand their positions, characteristics and magnetic environments. The next few years will be very exciting.”

“We’re very excited to see what CHIME can do when it’s running at full capacity,” said Deborah Good, a PhD student in physics and astronomy at UBC who is part of CHIME’s [burst] team.

“At the end of a year we may have found 1,000 more bursts. Our data will break open some of the mysteries of [the bursts].”

They spotted the bursts in a two-week period.

“Whatever the source of these radio waves is, it’s interesting to see how wide a range of frequencies it can produce. There are some models where intrinsically the source can’t produce anything below a certain frequency,” team member Arun Naidu of McGill University said in a statement.

CHIME, a radio telescope, was designed and built by scientists at the University of British Columbia, McGill University, the University of Toronto, the Perimeter Institute for Theoretical Physics, and the National Research Council of Canada.

“[We now know] the sources can produce low-frequency radio waves and those low-frequency waves can escape their environment, and are not too scattered to be detected by the time they reach the Earth,” said Tom Landecker, a CHIME team member.

He added: “That tells us something about the environments and the sources. We haven’t solved the problem, but it’s several more pieces in the puzzle.”

The findings were published in Nature papers and can be accessed here and also here.