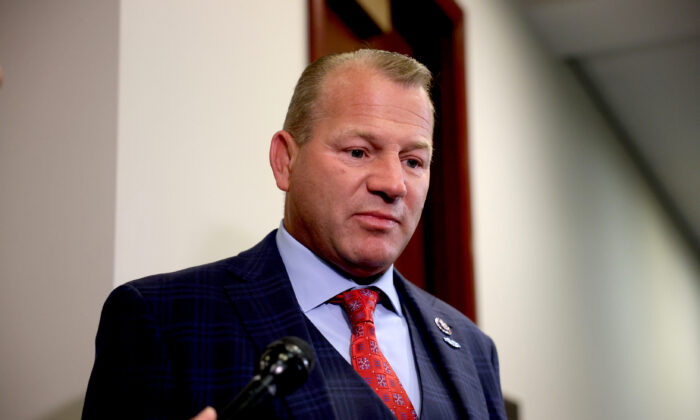 Rep. Troy Nehls (R-Texas) speaks with reporters as he departs from a caucus meeting with House Republicans on Capitol Hill in Washington on July 20, 2021. (Anna Moneymaker/Getty Images)
Immigration & Border Security

Since the Biden administration took office. the southern border has reported a record number of illegal border crossings, which will only skyrocket with the termination of the “Remain in Mexico” policy, Rep. Troy Nehls (R-Texas) told NTD’s “Capitol Report” on May 6.

“We’ve had millions of people come through our southern border since [President Joe] Biden has been in office,” Nehls stated. “Now with ending Title 42, you’re going to have millions more, hundreds of thousands of more every month, and it’s got to stop.”

He added that illegal border crossings are “criminal” in nature by opening doors to human trafficking and drugs.

“The amount of drugs that are coming through and the human trafficking, the suffering that is taking place with these people coming to our southern border, it must stop.”

President of the National Border Patrol Council Brandon Judd stated in February that with Mexican cartels controlling the border, Border Patrol would be lucky to “seize even 5 percent of what’s coming across the border,” referring to fentanyl pills.

During the first three months of fiscal year 2022, agents have seized 316 pounds of fentanyl coming across the border between ports of entry—more than triple that of the same period in fiscal year 2021. The number of Americans who have died from drug overdoses between April 2020 and April 2021 also hit a record high of 100,000, with reports of fentanyl involvement reported in almost two-thirds of those deaths, according to the Centers for Disease Control and Prevention.

Nehls stated that the Biden administration should have kept the “Remain in Mexico” policy as well as continued to “build the wall” to make America “a much safer place today.”

On May 5, top Department of Homeland Security (DHS) official Blas Nuñez-Neto denied that the termination of Title 42 will allow those “entering the country unlawfully” to enter and stay.

The acting assistant secretary of the DHS reported that Title 42 “led to extraordinarily high recidivism rates” meaning that “individuals expelled to Mexico attempt to reenter shortly after their expulsions.”

Ending Title 42 will allow the DHS to “impose meaningful immigration consequences on individuals who violate our immigration laws,” Nuñez-Neto said at a hearing about the southwest border.

“Over time, once we start reimposing significant immigration consequences on people at the border through our use of expedited removal, particularly for single adults and particularly for migrants from Mexico, you are going to see a decrease,” Nuñez-Neto said told the hearing.

“Joe Biden’s reckless decision to rescind Title 42 would have flooded our already stressed southern border with illegal immigrants,” Louisiana Attorney General Jeff Landry, a Republican and one of the plaintiffs, told The Epoch Times in a statement.