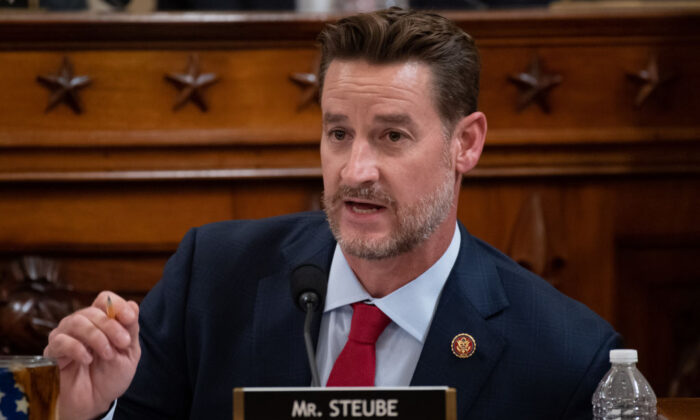 The Biden administration should take into consideration pressing issues facing Americans like rising inflation, Chinese aggression, and the ongoing border crisis when sending money to support Ukraine during its conflict with Russia, according to Rep. Greg Steube (R-Fla.).

Steube’s comments come after House lawmakers on Tuesday approved a new $40 billion aid package for Ukraine in an another show of support for the nation that has been fighting off an invasion for three months.

The package, $7 billion more than president Biden’s request in April, would provide the embattled country with further military and economic assistance while bringing the total American support to nearly $54 billion, including the $13.6 billion in support Congress enacted in March.

That is $6 billion more than the United States spent on all its foreign and military aid in 2019, according to a January report (pdf) by the nonpartisan Congressional Research Service, which studies issues for lawmakers.

It still needs to be approved by the Senate but was delayed after Sen. Rand Paul (R-Ky.) blocked a fast-track vote and urged leaders to include language in the bill that would ensure monitoring of exactly how the $40 billion is spent.

Steube voted against the bill and told NTD’s “Capitol Report” program that he believes the Biden administration should be focusing more on other pressing issues facing Americans while questioning how exactly the initial funding was spent.

“We just allocated $14 billion, 300+ million dollars was going to weapons, have those been received in Ukraine? What happened to the initial funding? Why do we need more funding?” Steube said.

“What happened to the amount of spending that was originally there? $40 billion is the equivalent of DHS Customs and Border Patrol, Coast Guard, TSA, and ICE combined in one annual spending. We have an invasion on our southern border, record inflation, [and] all sorts of big issues that are affecting our country. I don’t understand why we should be borrowing $40 billion from the Chinese to give it to the Ukrainians with absolutely no assurances or safeguards that the money is actually going to go for its intended purpose.”

Steube then suggested that the Biden administration is “obviously compromised” by the Chinese Communist Party (CCP), and is not taking a strong enough stance against the CCP, instead funneling its money and resources into fighting Russian aggression.

“John Radcliffe, the head of our intelligence agency under the Trump administration, when he left said the number one threat facing the safety and security of the American people was the Chinese Communist Party,” Steube said.

“We’ve already given money to the Ukrainians, Trump gave them javelins. We don’t know the status of those initial appropriations at the beginning of the war. And I think there are a lot more problems right here in the homeland that shouldn’t be the focus of the American taxpayers in Congress.”

Steube also spoke about his recently-introduced bill, the “Protection of Women and Girls in Sports Act of 2021” which he said will ensure that women and girls are granted a fair playing field in competitive sports by making it a legal requirement that sex is based solely on an individual’s reproductive biology and genetics at birth.

Colleges and universities that do not comply with the legislation would lose federal funding.

Steube and Republican Study Committee (RSC) Chairman Rep. Jim Banks (R-Ind.) filed a discharge petition on behalf of the bill last month after Democrat leaders refused to allow the House of Representatives to vote on the legislation.

“So what this bill would do is not allow biological men to compete with women and women’s collegiate activities or any type of women’s athletics, and if these colleges and universities deny that, then they’re going to lose federal funding.

“There’s no better way to get the attention of a lot of people who get federal government funding than to take away the amount of money that they get. All these universities get a ton of federal money from the United States government,” he added.