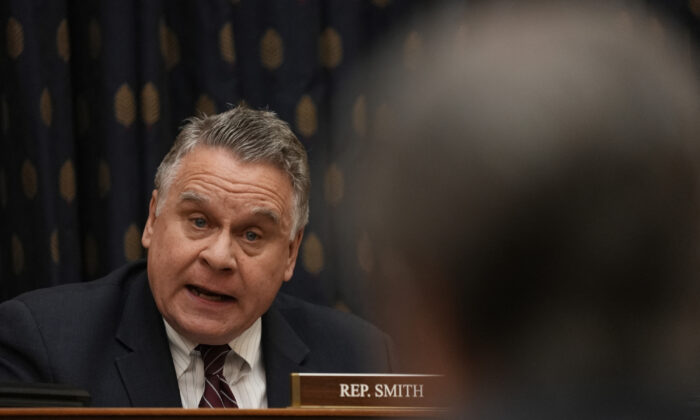 Rep. Chris Smith speaks as US Secretary of State Antony Blinken testifies before the House Committee on Foreign Affairs in Washington on March 10, 2021. (Ken Cedeno/POOL/AFP via Getty Images)
US-China Relations

Rep. Chris Smith (R-N.J.) has introduced legislation that would strip Beijing of its trade privileges with the United States, a measure meant to punish the communist regime for its “heinous human rights atrocities.”

The bill, H.R. 7193, introduced on March 22 would remove China’s permanent normal trade relations (PNTR) status, and “relink” Beijing’s trade status with the human rights situation in China, according to a statement from Smith’s office. It would require annual affirmation from the U.S. president that Beijing is making marked progress in the improvement of its human rights record to achieve normal trade status.

In pushing this measure, Smith, a longtime critic of China’s abuses, hopes to send a strong message that the Chinese Communist Party (CCP) cannot continue its myriad human rights violations, including its well-documented campaign of repression against the Uyghur minority of western China, with impunity.

In 2000, Congress approved legislation to give China permanent most-favored-nation (MFN) status, now known as PNTR, which paved the way for China’s accession to the World Trade Organization. The status opened the U.S. market to Chinese products with trade advantages such as reduced tariffs.

The widely-held belief at the time was that the Chinese regime was worthy of an official status within the international economic system that would facilitate meeting its trade commitments. But since that time, Beijing has routinely flouted its trade obligations and human rights abuses in China have deteriorated with help of high-tech surveillance technology.

Prior to 2000, China’s MFN status was reviewed annually by Washington, allowing critics of the regime a yearly opportunity to advocate for its removal.

Smith also referred to a consequential decision made by President Bill Clinton in 1994 to remove the consideration of Beijing’s rights record from Washington’s annual MFN review.

“Since President Clinton delinked trade from human rights with China in 1994—and under successive administrations, including now under the Biden administration—the Chinese Communist Party has gotten a pass for its gross human rights violations while benefiting tremendously by stealing American jobs and growing into the economic superpower it is today,” Smith said in a statement.

In the aftermath of Clinton’s decision in 1994, Smith held a press conference on Capitol Hill in which he harshly criticized the then-president for giving a pass to the “cruel realities” of CCP rule.

Suozzi further elaborated on the pitfalls of the longstanding U.S. approach of conferring favorable trade status on China as part of an effort at constructive engagement with the regime

“It’s been 50 years since President Nixon first went to China, and we always believed that the more the Chinese government was exposed to our way of life, our democracy, and our economic system, the more they would become like us and value human rights and free markets. That simply has not happened,” Suozzi said.

“Now more than ever, we must stand up to China’s crimes against Uyghurs and Tibetans, and its destruction of democracy in Hong Kong. We cannot continue to allow China to act with impunity and undermine the rules-based order by cheating at the expense of other nations,” he added.