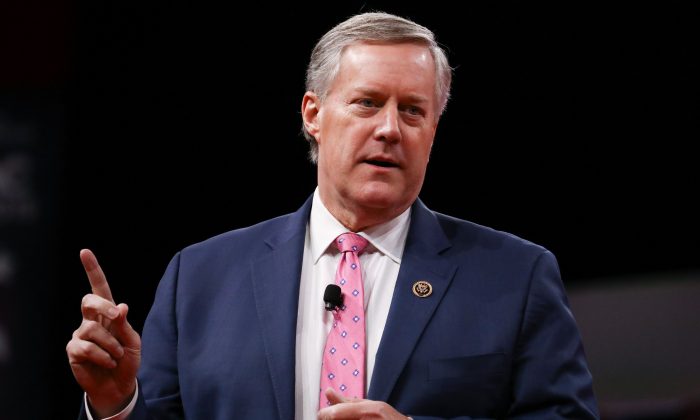 Rep. Mark Meadows (R-N.C.) referred former CIA contractor Nellie Ohr for prosecution on the basis of several statements she made during her congressional testimony that Meadows called “demonstrably false.”

Ohr was a major player in efforts to formulate the Trump–Russia collusion narrative in 2016, when she worked for Fusion GPS, the opposition research firm that was paid by the Democratic National Committee and the campaign of former Secretary of State Hillary Clinton to deliver information that would be damaging to rival candidate Donald Trump.

In addition to Ohr, Fusion GPS hired former British spy Christopher Steele, who produced the infamous Steele Dossier, a collection of unsubstantiated claims about Trump and Russia that was spread through the media and among high levels in the Obama administration to seed the Trump–Russia narrative.

Her husband, Bruce Ohr, was the highest-ranking career official at the Justice Department (DOJ), and acted as a back channel through which Steele funneled his claims to the FBI after the bureau terminated Steele as a source for spilling his relationship with the FBI to the media.

Nellie Ohr previously worked as a Russia expert for the CIA’s Open Works project, which used outside contractors to create intelligence products from open source information. Her job for Fusion GPS was to probe some Trump family members and several associates of his campaign.

She also denied that she shared her research on Russian organized crime and Trump with anybody outside of Fusion GPS, her husband, and Steele.

But hundreds of pages of emails between Ohr and her husband appear to contradict her testimony.

In March 2016, DOJ official Lisa Holtyn sent Bruce Ohr an email asking if Nellie Ohr would be able to speak with DOJ officials Ivana Nizich and Joe Wheatley to discuss her research as part of an ongoing investigation.

“Sure!” Ohr replied to her husband when he checked with her.

In a July 26, 2016, email to Bruce Ohr, Holtyn, Nizich, and Wheatley, she shared her analysis on a Russian mafia boss and also the pro-Russian separatists in eastern Ukraine.

“Taking these communications into account, in addition to other information we have reviewed, Ms. Ohr misled the committees,” Meadows’s referral states, and later concludes the following:

“Truthful witness testimony is crucial to the integrity of investigations conducted by the House of Representatives. Ms. Ohr violated her oath to tell the truth by making demonstrably false statements during her testimony before the Committee. Accordingly, I am referring Nellie Ohr to the Department of Justice for investigation of potential violation(s) of 18 U.S.C. [Section] 1001.”

Bruce Ohr’s emails were obtained in December 2018 by the right-leaning watchdog Judicial Watch, through a Freedom of Information Act lawsuit (pdf).

The emails reveal that Nellie Ohr played an active part in her husband’s career, helping to host two high-profile delegations between April and June 2016.

One was a delegation of European analysts specializing in Russian organized crime meeting with the DOJ’s Wheatley and Nizich and possibly others. The other was a dinner with Alison Saunders, then-director of public prosecutions in charge of the UK’s Crown Prosecution Service.

She also regularly sent open-source materials on Russia to her husband and at times to Holtyn, Wheatley, and Nizich as well.

“Hi Honey, if you ever get a moment you might find the penultimate article interesting—especially the summary in the final paragraph,” she wrote to her husband on July 6, 2016. The paragraph, bolded in the email, read in part, “If Putin wanted to concoct the ideal candidate to service his purposes, his laboratory creation would look like Donald Trump.”

The FBI officially opened a counterintelligence investigation into four associates of the Trump campaign on July 31, 2016, but after more than two years of investigation, which was taken over in 2017 by special counsel Robert Mueller, the investigator found that the Russians indeed tried to meddle with the 2016 elections, but didn’t find any collusion nor coordination with the Trump campaign.

Attorney General William Barr testified to the Senate in April that he believes that Trump’s campaign was being spied on and said he plans to review “both the genesis and the conduct of intelligence activities directed at the Trump campaign during 2016” to learn whether the surveillance was “adequately predicated.”