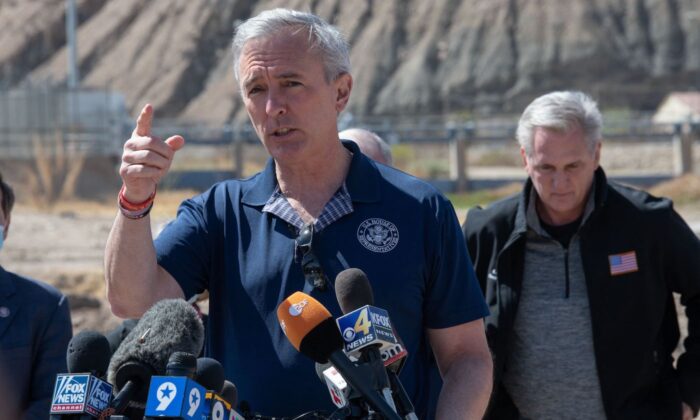 Rep. John Katko (R-N.Y.) has called out District of Columbia Mayor Muriel Bowser and New York City Mayor Eric Adams over what he calls their “hypocritical” approach to immigration after they complained about an increase of illegal aliens arriving in their respective cities from Texas and Arizona.

Bowser and Adams, who are both Democrats, have in recent weeks said that an influx of illegal immigrants has put pressure on homeless shelters in their cities as well as other services, with Adams asking that the federal government help pay for what he said was a wave of illegal aliens pouring into the city.

Katko told Fox News’ “The Story” that the mayors’ complaints are hypocritical given that they have both previously advocated for an open borders immigration policy.

“I think it’s the height of hypocrisy because these are the same people who have been advocating for open borders,” Katko said. “And now the open borders have come to their cities and towns, they’re upset about it.”

In recent months, both Texas and Arizona authorities have been offering free rides to the nation’s capital for illegal aliens who have claimed asylum, citing a lack of resources in dealing with them amid a surge in illegal immigration since last year.

Bowser this week claimed that some immigrants are being prevented from reaching their final destinations by Texas officials who are “tricking” them.

‘Tricked Into Getting on Buses’

“This is a very significant issue. We have, for sure, called on the federal government to work across state lines to prevent people from really being tricked into getting on buses. We think they’re largely asylum-seekers who are going to final destinations that are not Washington, D.C.,” she said on CBS’ “Face the Nation” on July 17.

Meanwhile, Adams this week called on the Biden administration to send “additional federal resources immediately” so New York can adequately deal with an influx of arriving illegal immigrants.

“Currently, New York City is experiencing a marked increase in the number of asylum seekers who are arriving from Latin America and other regions. In some instances, families are arriving on buses sent by the Texas and Arizona governments, while in other cases, it appears that individuals are being sent by the federal government,” Adams said in a statement, adding that more than 2,800 illegal aliens had entered the shelter system in recent weeks.

Ranae Eze, press secretary for Texas Gov. Greg Abbott told The Epoch Times via email that with Washington, D.C. now “experiencing a fraction of the disaster created by President [Joe] Biden’s reckless open border policies that our state faces every single day, maybe he’ll finally do his job and secure the border.”

Katko told Fox News that non-government groups working on behalf of the Biden administration are actually the ones responsible for dispatching immigrants to cities across the country, not officials in Texas or Arizona, and that they do so without first informing those communities that the immigrants will be arriving there.

“The governors from Texas and Arizona are not sending them to New York City,” the lawmaker said. “It’s people working on behalf of the Biden administration. They’re called non-government organizations that process the illegal aliens and then send them out all over the country without notifying communities.”

“If Mayor Adams is complaining because he got a couple of thousand people, what do you think the people along the southern border are doing in small towns and communities that are being overwhelmed on a daily basis with this? It’s crazy,” Katko added.

The Republican lawmaker blamed the Biden administration for creating what he said is “a human rights catastrophe at the border,” and noted that border communities in Arizona and Texas have been forced to process the dead bodies of illegal immigrants.

He added that communities in both states have been forced to cut their budgets by up to 20 percent to process the dead bodies “they find in the bushes.”