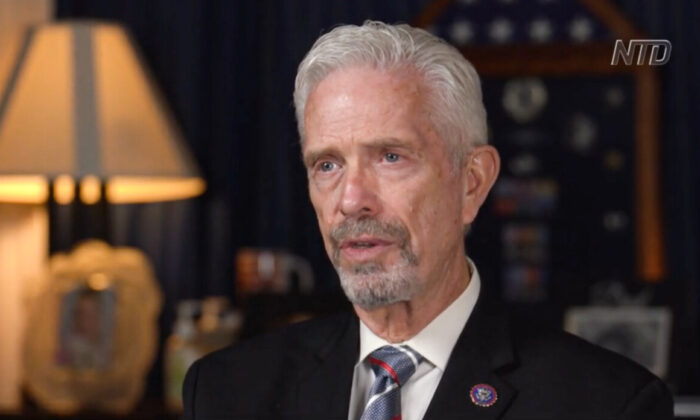 The Biden administration needs to reverse its course of “reckless spending” and reliance on foreign nations for energy if inflation is going to go down, according to Rep. Bill Johnson (R-Ohio).

Johnson, who is running for reelection in Ohio’s 6th Congressional District, told NTD’s “Capitol Report” program that he doesn’t see an end in sight to sky-rocketing inflation unless the president stops funneling “massive amounts of money” into the system and reduces energy dependence on other countries like Venezuela and Iran.

His comments come as inflation across the United States reached 8.3 percent in April and left Americans paying out more for everything from basic goods to gasoline. In the month prior, inflation reached a peak of 8.5 percent.

Biden said last week that bringing inflation levels down across the country is his “top economic priority,” while blaming the inflation crisis on COVID-19-related supply chain disruptions and Russian President Vladimir Putin’s invasion of Ukraine.

However, the president has faced criticism from many economists who say that his stimulus checks and programs are further stoking a volatile economy and pushing inflation further.

Johnson says there are two primary reasons contributing to inflation across the nation “going through the roof.”

“One, of course, is the massive amounts of money that the Biden administration has spent, put into the system. Anytime there is this much cash, this many dollars floating around in our economy, it devalues the dollar,” the Republican explained. “Things that you pay $1 for today, you’re going to pay $2 and $3 for tomorrow, because there’s simply so much cash in the system, we can’t continue that kind of reckless spending.”

The lawmaker said the second issue pushing inflation higher is energy, which he said was “at the center of much of this inflation problem.”

Gas prices are currently at record highs in the United States at $4.483, according to data from the automotive group AAA, surpassing the record of $4.11 on July 17, 2008, which would have amounted to around $5.25 today when adjusted for inflation.

Americans in the states of Kentucky, Illinois, York, Indiana, and North Carolina, among others, saw the largest increases in the past seven days to May 12.

“And even until a few weeks ago, Russia for our energy resources, that’s crazy. He needs to reverse course if he wants to solve this inflation problem,” Johnson said.

Disruptions to global energy supplies since Russia’s invasion of Ukraine and Western sanctions against Moscow by the West have already impacted global gas prices. The situation is being further exacerbated by ongoing supply chain issues since the COVID-19 pandemic.

Meanwhile, the Organization of the Petroleum Exporting Countries, Russia, and allied producers, known as OPEC+, has agreed to only a modest monthly increase in oil flows, despite the Biden administration’s repeated calls to substantially boost production and bring prices down.

It comes as traditional power plants in the United States are also being shut down and replaced by renewable energy sources such as wind and solar farms, but experts fear that replacement isn’t happening fast enough, creating a potential risk of shortages.

Elsewhere, Johnson commented on the nationwide baby formula shortage, which he said could “easily be solved.”

“If I were the president, I’d tell the FDA put all of your people on this issue, get to that facility in Michigan, find out how to get it reopened, get production going again,” he said.

The lawmaker also said he was concerned about reports that formula is being shipped to illegal immigrant holding centers near the Mexico border despite a lack of supply across the country.

“And yet, American citizens’ mothers and their children can’t get formula themselves,” he said. “This is crazy. This is actually an easier problem solved and the Biden administration is making it more difficult than it needs to be.”