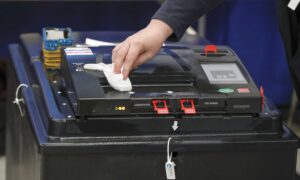 At a press conference during the Arizona election hearing, Congressman Paul Gosar (R-Ariz.) said this election issue should concern everyone.

“This is not even a partisan issue; this is a bipartisan issue. In fact, one of my colleagues, a very liberal member from Maryland, Jamie Raskin, sits on government oversight, has actually introduced legislation because he was so concerned about the corruptibility in the 2016 election in regards to Russia. BINGO! So, we ought to be doing this across the board for transparency to the American public,” said Gosar.

State Rep. Mark Finchem (R-Ariz.) says the problem is all about the chain of custody of ballots.

“Cannot emphasize that enough. We do not have fraud countermeasures. We have people who have got too many fingers on those ballots. We have equipment that is made by a foreign country that is 100 percent corruptible. And we’ve got a duplicitous organization, that would be our elected officials, who are permitting the sequestration of that instead of showing transparency and say, ‘You know what? You don’t have to give us a subpoena. You don’t have to impound the machines. Tell you what, pick one, let’s do a forensic audit.’ All I’m hearing is crickets. And that is unacceptable,” said Finchem.

State Sen. Sonny Borrelli (R-Ariz.) pointed out how House Speaker Nancy Pelosi once said in 2017 that the election had been hijacked and hash-tagged “Follow the Facts.”

But, now, he says, they want to shove the facts under the carpet.