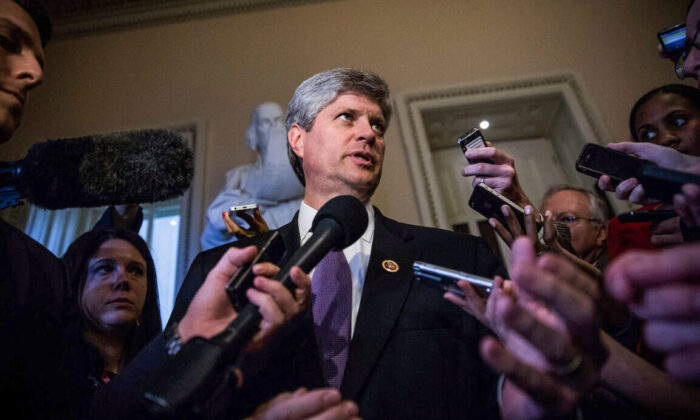 House GOP Leader Kevin McCarthy (R-Calf.) said Rep. Jeff Fortenberry (R-Neb.) should resign after he was convicted of lying to the FBI about illegal campaign contributions.

Fortenberry was found guilty on March 24 of concealing information and making false statements to federal authorities who were investigating illegal contributions to his 2016 election campaign, the Justice Department announced.

“I want to discuss with him today,” McCarthy said, but added, “I think he had his day in court. And I think if he wants to appeal, he can go do that as a private citizen.

“But I think out of respect, let me talk to him today. But I think when someone’s convicted, it’s time to resign,” McCarthy said. “Yes.”

McCarthy’s approval of Fortenberry’s resignation is a tough blow for the Nebraska Republican.

In the past, McCarthy has defended GOP members like Rep. Paul Gosar (R-Ariz.), who was censured by the majority Democrat House in November for a controversial video posted to his Twitter.

Speaker of the House Nancy Pelosi (D-Calif.) also weighed in on the issue.

“Congressman Fortenberry’s conviction represents a breach of the public trust and confidence in his ability to serve,” Pelosi said in a statement. “No one is above the law.

“Congressman Fortenberry must resign from the House.”

Fortenberry, who has served in Congress since 2005, was charged in October last year with one count of scheming to falsify and conceal material facts and two counts of making false statements to federal investigators looking into illegal contributions.

Each charge carries a maximum penalty of five years in federal prison, as well as fines.

The jury returned the verdicts within just hours of deliberations following a weeklong trial in Los Angeles.

“After learning of illegal contributions to his campaign, the congressman repeatedly chose to conceal the violations of federal law to protect his job, his reputation, and his close associates,” U.S. Attorney Tracy L. Wilkison said in a statement. “The lies, in this case, threatened the integrity of the American electoral system and were designed to prevent investigators from learning the true source of campaign funds.”

Following the conviction, Fortenberry told reporters outside the courthouse that he would appeal the decision immediately, and said that he believed the trial had been unfair.

Under federal law, a foreign national is prohibited from contributing to any U.S. elections.

Prosecutors said that Chagoury, a Lebanese-Nigerian billionaire, had arranged for $30,000 of his money to be contributed through other individuals, or “straw donors” to Fortenberry’s campaign during a fundraiser held in Los Angeles, which is also illegal.

Chagoury admitted in 2019 to funneling $180,000 in illegal campaign contributions to four different political campaigns and agreed to pay a $1.8 million fine and cooperate with federal authorities as part of a deferred prosecution agreement.

It is unclear if the GOP candidate will suspend his campaign for reelection.

If Fortenberry were to resign as McCarthy and Pelosi have called for, it would trigger a special election in Fortenberry’s district. Though there is little chance that the seat will flip into Democrats’ hands in the solid-red stronghold, the vacancy would chip away at the GOP caucus’ strength in the lower chamber.

However, Fortenberry has not given any indication that he will resign, and his office could not be immediately reached for comment.