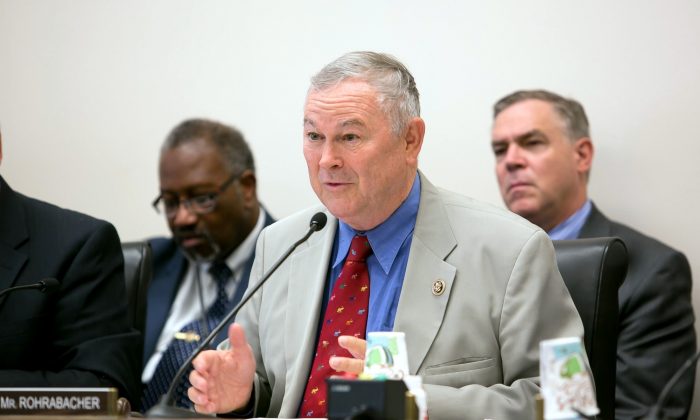 Republican Rep. Dana Rohrabacher, of California, said that one of his 71-year-old staffers was knocked unconscious during a protest outside his Huntington Beach, Calif., office.

In a statement, Rohrabacher’s office said that during the fracas, “a two-year-old girl apparently brought along with the crowd was also hit by a swinging door.”

Kathleen Staunton, who has managed his office since his first term in 1989, attempted to leave through the front door to go to the bathroom, before “a protester yanked the door open, causing her to fall and hit her head,” the statement reads. At the same time, the door hit a child, who was uninjured.

Staunton was rushed to a hospital by paramedics.

“I am outraged beyond words that protesters who mobbed my Huntington Beach office violently knocked down my faithful district director, Kathleen Staunton,” he said.

“And, yes, deliberate or not, the incident came as part of a mob action that not only intimidates but coerces. Though the protesters think of themselves as idealists, they engaged in political thuggery, pure and simple,” the longtime congressman added.

Rohrabacher was named a candidate for secretary of state under President Donald Trump, but the job ultimately went to former Exxon Mobil CEO Rex Tillerson.

Ambassador Rees: The Rohrabacher That I Know

“These people do not want, as they’ve claimed, to hold a town hall meeting with me. These are unruly activists on whom the lessons of civility and democratic participation have been lost. They have repeatedly disrupted the normal operations of my district office, preventing my staff from serving constituents with real needs, such as veterans’ and social security issues,” he added.

The protest was apparently part of a nationwide movement that calls itself “Indivisible” and say they are trying to resist Trump’s administration. Other Republican congress members and senators have also been harassed by protesters at their offices.