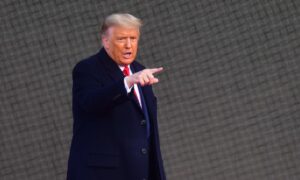 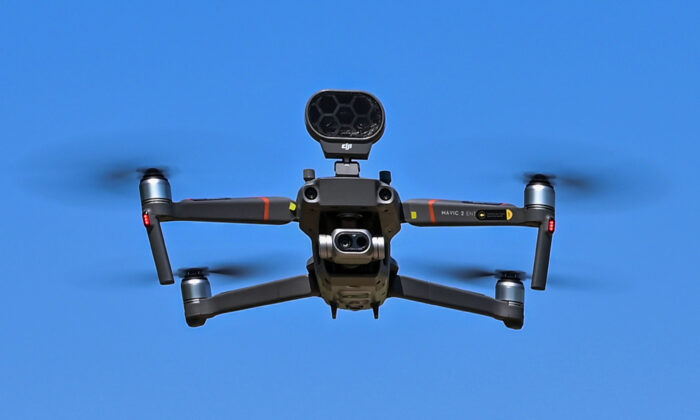 A DJI Mavic 2 Enterprise drone equipped with a thermal sensor used by municipal police in Treviolo for checking people's temperature is pictured in flight on April 9, 2020, in Treviolo, near Bergamo, during the country's lockdown aimed at stopping the spread of COVID-19. (Miguel Medina/AFP via Getty Images)
National Security

Rep. Jim Banks (R-Ind.), in a letter to the Chamber of Commerce, expressed concern over what he described as a “hasty dismissal of proven national security risks,” referring to a recent report by the chamber that flatly opposes proposals to ban Chinese-made drones.

The Nov. 1 letter, which was obtained by The Epoch Times, was sent to Thomas Donohue, the Chamber’s president and CEO. Banks made special mention of drones built by firms that are connected to the Chinese Communist Party (CCP) and urged the group to reexamine its stance.

“The fact is that foreign-manufactured drones, and particularly, drones produced by Dà-Jiāng Innovations (DJI)—a behemoth manufacturer with ties to the Chinese Communist Party, pose a present national security threat and require an immediate executive and/or legislative response,” he said in the letter.

A recent report by the Chamber argued against imposing country-of-origin restrictions on China. The group said such moves would damage the economy and wouldn’t be beneficial to the United States.

The group also described the proposals as “overly broad,” calling it a “restrictive tool to address supply chain or security concerns.” It warned against adopting restrictive policies through executive action, regulations, or legislation, adding that it only creates “a false sense of security.”

But lawmakers and experts have expressed concern over the recent loan of DJI drones to police and fire departments across the United States. The devices are already under intense suspicion as a potential national security threat because they can send data to China.

Banks told The Epoch Times in a statement that the drone issue should be handled by Congress, adding that the security concerns are bipartisan.

He and his colleagues on the House Armed Services Committee banned federal agencies from purchasing drones made in China under a provision in the 2020 NDAA (The National Defense Authorization Act).

“And the provision was bipartisan, so it’s an issue that can and should be handled by Congress,” Banks said. “But the Pentagon was given an exemption and irresponsibly continued to buy DJI drones. I’m hopeful that in 2021, Congress will put an end to that.”

A 2017 memo from the Los Angeles office of Immigration and Customs Enforcement stated that the agency had “moderate confidence” that DJI is “providing critical infrastructure and law enforcement data to the Chinese government.”

DJI, the world’s largest consumer drone manufacturer, sent 100 of its drones to police, fire, and public safety organizations in 22 U.S. states, ostensibly to help in the battle against the spread of the CCP virus, commonly known as the novel coronavirus.

“Think about this for a second,” Sen. Rick Scott (R-Fla.) wrote on Twitter on April 18. “This virus originated in Communist China and the Chinese Communist Party’s lies helped it spread around the world. Now we’re using drones made by a Chinese company and backed by the CCP to enforce social distancing. This is crazy!”

The Justice Department (DOJ) last month updated its policy on grants associated with foreign-made drones. Now, the department prevents funds from being used to purchase or operate drones manufactured or assembled by an “entity that DOJ leadership has determined is subject or vulnerable to extrajudicial direction from a foreign government.”

The Interior Department in January grounded its entire fleet of drones because of security risks associated with DJI, according to the DOJ. And in May 2018, the Department of Defense issued a blanket ban on the purchase and use of DJI drones.

Under its national security law, the Chinese Communist Party can access all data from DJI and any other Chinese drone manufacturer. Because of this, it’s impossible to secure federal agencies’ drone data without entirely banning drones made in China.

Banks, in his letter, said the answer should be clear.

“Congress does not have to choose between preserving our national security and maintaining a healthy UAS [unmanned aircraft system] industry,” he said. “In this instance, we can ‘have our cake and eat it too.'”