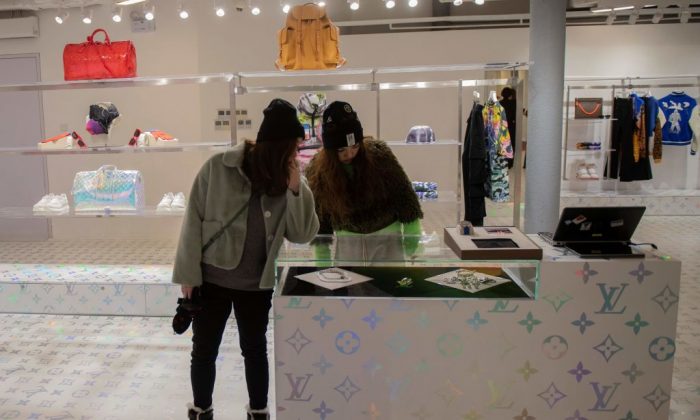 With Chinese New Year just a day away, out-of-towners in China are returning to their hometowns in droves in order to spend the important holiday with family.

But as modern Chinese society has emphasized conspicuous consumption to show off wealth and social status, a new kind of rental business—which allows people to borrow everything from cameras, shoulder bags, and electronic products—is now flourishing.

Zhou Xiaodong, the founder of an online rental platform called Tanwu, told Chinese state-run newspaper Beijing Youth Daily in a Jan. 24 article that leading up to the New Year, his company’s business increased by more than 200 percent compared to the same period last year.

Many Chinese have shared their reasons for wanting to take out a rental.

“I need to attend many gatherings with former classmates and family get-togethers. I need a shoulder bag that looks decent. But there is no need to really buy one,” said Ms. Liu, a white-collar worker in Beijing, in an interview with Beijing Youth Daily She explained that she had paid a daily fee of 50 yuan ($7.41) to rent out a bag that has a market value of more than 10,000 yuan ($1,482).

Multiple Chinese media have recently re-posted an article originally published on WeChat, a popular social media platform, about an unnamed 30-year-old Chinese woman who was fired from her job in Beijing two months ago. Out of fear that her parents might find out about her unemployment, she decided to rent a handbag with a market value of 100,000 yuan ($14,826) before going home for the New Year holidays.

Ms. Zhang, a white-collar worker in Chengdu, the capital of Sichuan Province, told local state-run media Sichuan Online that she planned to rent out a luxurious shoulder bag worth more than 10,000 yuan (about $1,482) on the rental platform Bgbaobao because it would only cost her about a little more than 100 yuan ($15) for a 7-day rental.

“Many women have shoulder bags that they might use a few times before leaving them unused in their closets. Some might sell their unused bags on second-hand platforms, but they usually incur a huge loss because the resale price is a steep drop-off from the original price tag,” explained Ms. Zhang.

“This [rental] platform is a money-saver. You can experience using different bags with just a little money,” she said.

China’s state-run Spring Evening News, in an editorial published Jan. 26, objected to the phenomenon of renting luxurious items for the New Year holiday as “keeping up with the Joneses”—to show off in front of friends and family members.

One plausible reason why Chinese are increasingly opting to rent luxurious goods—rather than own—is the recent downturn in the economy. China’s GDP grew 6.6 percent in 2018, the slowest pace in 28 years.

Unemployment is on the rise as Chinese job websites report fewer recruitment listings and rumors abound of layoffs at some of the country’s biggest tech companies. China’s popular job-listing service Zhaopin.com, for example, reported a decline of 51 percent year-on-year in the number of ads for positions in the information technology (IT) sector during the third quarter of 2018.