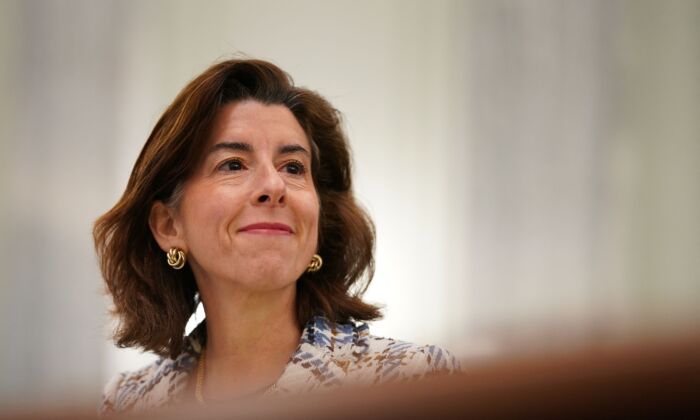 US Commerce Secretary Gina Raimondo testifies before the Senate Commerce, Science and Transportation Committee during a hearing on Capitol Hill in Washington on April 27, 2022. (STEFANI REYNOLDS/AFP via Getty Images)
US-China Relations

Commerce Secretary Gina Raimondo said on July 11 that removing Trump-era tariffs on Chinese goods would not cool down inflation “in a very significant way,” highlighting the difficulties as the White House seeks to tame historic price rises in the country.

Still, the senior official administration suggested her support for the move, saying it could make a difference for consumers.

“Lifting tariffs isn’t going to bring down top-line inflation in a very significant way,” Raimondo said in an interview with NBC’s “Meet the Press.” “What it will do potentially is help consumers on certain household goods. And so for that reason, given where inflation is, I think it could make sense to do it.

On July 13, data from the Bureau of Labor Statistics showed that inflation hit a new 40-year-high, surging to 9.1 percent in June, compared to a year earlier.

Such a proposal has reportedly been met with division among administration officials, some of whom worry that it may make the president look soft on China while also alienating the Democratic Party’s powerful trade union base. Republicans have also latched on to this as purported evidence of the Biden administration’s weak stance in countering the communist regime’s abuses.

“The China tariffs are a significant piece of leverage,” Tai told the Senate on June 22. “A trade negotiator never walks away from leverage.”

Tai said that removing tariffs would likely have a limited effect on controlling inflation, and that “we need to be keeping our eye on the ball on this bigger picture,” which is protecting American trade interests against China’s plans to dominate important industries such as semiconductors.

President Joe Biden hasn’t given a timeline on when a decision about the tariffs would be made, telling reporters on July 10 that “we’re having further discussions on that [issue].”

Raimondo, in the interview with NBC, said, “We were briefing him [Biden], and I expect he’ll make a decision shortly.”