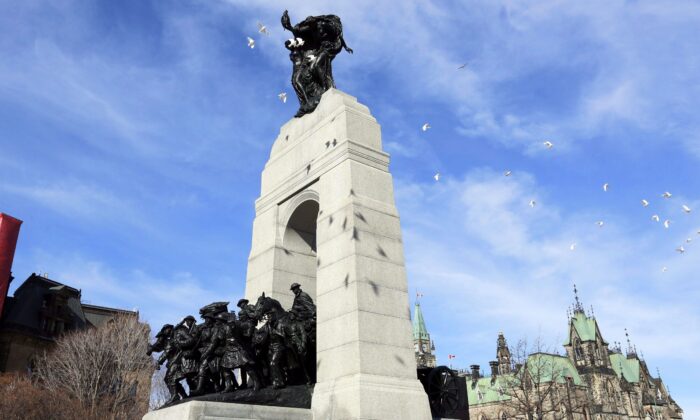 Doves fly over the National War Memorial, also known as The Response, to commemorate the 100th anniversary of the Battle of Vimy Ridge, in Ottawa on April 9, 2017. (THE CANADIAN PRESS/Fred Chartrand)
Viewpoints

Remembrance Day and Why We Must Cherish Our Nation’s Past

Surely, the worst aspect of Alzheimer’s disease and other forms of senile dementia is the loss of our ability to remember. Without memory, we are mere bodies trapped in the present without links to our families, our surroundings, and even our own personalities. Because the creature that we were—with all our likes, dislikes, loyalties, loves, quirks, failings, and triumphs—has ceased to be truly present, we are lost to ourselves and others, unable to make sense of the world.

Memory is as important to a nation as it is to an individual. This is why a sensible country fills itself with a host of symbols, artifacts, and images that link its citizens to the past. It puts the faces of heroes on its currency: George Washington on the American dollar, Winston Churchill on the British £5 note, and Alexander Suvorov on the Transnistrian ruble. It fills public spaces with memorials to great men and women or military victories, such as the Arc de Triomphe in Paris, the statue of Simón Bolivar in Caracas, and giant portraits of Sun Yat-sen in Taipei. National anthems sing of collective memories: “Allons enfants de la Patrie,” “And the rocket’s red glare,” or “In days of yore, from Britain’s shore, Wolfe the dauntless hero came.”

This is why our national holiday called Remembrance Day is such an important occasion. In countless little ceremonies at cenotaphs, schools, and parks and in the solemn assembly that takes place every Nov. 11 at the foot of the great National War Memorial in Ottawa, Canadians gather in a united memory.

We become mindful of two important truths. The first is that war is a horrible business, one that takes lives, that requires sacrifices from our sons and daughters that we are committed never to forget. The second is that the world is a dangerous place and that Canadians often have been called upon to respond in a warlike manner; indeed, the name of that bronze military statuary on our capital city’s cenotaph is “The Response.”

We often let it slip our minds that Canadians can be a martial people with an impressive list of enemies whom we have defeated: American invaders, American-based Irish invaders, Sudanese dervishes, Boer kommandos, the Kaiser’s Imperial German army, Bolshevik militias, Hitler’s Waffen–SS, Mussolini’s Regia Aeronautica, Japanese kamikazes, the North Koreans, the Chinese People’s Liberation Army, Congolese warlords, ethnic cleansers in the Balkans, and Islamic terrorists in Syria and Afghanistan.

A nation strips itself of these symbols and ceremonies at its peril. That is why the 1960s debate about replacing the Canadian Red Ensign with the Maple Leaf flag was so bitter and heated. That is why the ill-fated unification of the Canadian armed forces by the government of Pierre Trudeau which abolished old uniforms, old units, and old ranks was resisted so vigorously and, in time, done away with. And that is why a leading politician’s claim that there were no central Canadian values, and that we were on our way to becoming a “post-national” state is so alarming.

If a nation is to be more than simply a group of inhabitants currently occupying a certain space, it must share memories and agree on what those memories should be. Those demonstrators who gather every year to protest the observance of Remembrance Day—either because they are pacifists who believe the day glorifies conflict or perhaps because they are supporters of our country’s enemies in the Middle East—are contesting the right of Canadians to remember our past with pride.

Akin to those protestors are those who have sought, often successfully, to tear down statues or rename scholarships or schools that once honoured important figures of Canada’s past. Lord Jeffery Amherst, whose name is a curse of the lips of P.E.I. Mi’kmaq activists, was the first to go, followed by Egerton Ryerson, the Ontario educational pioneer. Then, astonishingly, came the infamy heaped on Sir John A. Macdonald, the single greatest contributor to the foundation of Canada, a Father of Confederation, and the man who linked the provinces with a transcontinental railway.

The crime of these three men was that their attitudes to relations with indigenous peoples was not in tune with that held by some Canadians living today. More than one Canadian city is formulating a policy to reconsider the names of “towns, streets and monuments that celebrate past war heroes whom, seen through today’s ethical lens are not people who behaved in ways that we respect today,” as if Canadians of 2019 represent the peak of human wisdom and morality.

This attitude represents an act of national amnesia, a refusal to consider that our ancestors lived in different times with different values but may still have made contributions that we should salute. This commits the fallacy of “presentism,” which puts blinders on the national consciousness, making us easy prey for every suave politician, pre-teen activist, or purveyor of technological snake-oil who seeks our attention, votes, or money.

We must preserve our memories and stay rooted in our past, while we seek the best for our future. If we don’t, our “post-national state” may turn out to have a very short future.

Gerry Bowler is a Canadian historian specializing in the intersection of popular culture and religion. His latest book is “Christmas in the Crosshairs: Two Thousand Years of Denouncing and Defending the World’s Most Celebrated Holiday.”

Gerry Bowler
Follow
Gerry Bowler is a Canadian historian specializing in the intersection of religion and popular culture.