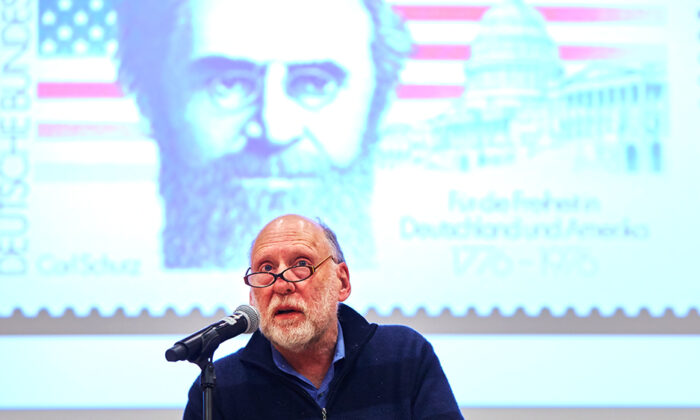 Todd Gitlin gives a keynote address at the 2018 International and Interdisciplinary Conference, "1968, 50 Years of Struggle," in Middlebury, Vt., on March 8, 2018. (Middlebury.edu)
Viewpoints

Gitlin was a curious figure.

He was indisputably a man of the Left.

But he spent much of his career lamenting the many ways in which the Left had disappointed him.

Gitlin’s most famous book was undoubtedly “The Sixties: Years of Hope, Days of Rage” (1987), his paean to a radical Left he could warm up to.

But by the mid-1990s, the hope had palled and the rage had become a parody.

In “The Twilight of Common Dreams: Why America is Wracked by Culture Wars” (1995), Gitlin lambasted various “ideologues of the Right” for perpetuating a Cold War mentality after the raison d’être for the Cold War—the Soviet Union—had disappeared.

But he was also critical of a radicalism that, to his mind, had lost its way.

Gitlin was a canny and articulate writer.

And, as a bona fide Sixties radical (he was born in 1943 and spent many years teaching at the University of California–Berkeley), Gitlin knew the terrain of the culture wars from the inside, as it were.

Yet, if he was a bona fide Sixties radical, he was (like so many American radicals) one who was early on absorbed into the academy.

As usual, the union of radicalism and academia produces a slightly comic, not to say surreal, effect.

As I noted when “Twilight” first appeared, there is something about the combination of denim and tenure that is inherently preposterous.

Professor Gitlin was very earnest when he utters words like “inequality,” “poverty,” “racism,” and so on, which he does early and often.

Throughout his career, Gitlin was a man in search of a movement.

He was never happier than when declaiming against the “stupefying degree of inequality in American society” or informing the reader that “males in Bangladesh have a better chance of living past age 40 than males in Harlem.”

(Unemployed fact-checkers of the world, unite!)

But somehow, Gitlin’s complaints never quite crystallized into a coherent picture.

This is partly because the radicalism of Gitlin’s youth got away from him.

What started with the Free Speech Movement in the early Sixties (a “decisive innovation”) soon mutated into a situation where speech was routinely censored by the commissars of political correctness.

This put Gitlin in an uncomfortable position.

He liked to talk about “freedom,” “maintaining solidarity with the oppressed,” and so on.

But academic radicals have for decades been partisans of one or another species of identity politics—feminist, ethnic, sexual, or all of the above.

Although they adamantly deny that such a thing as political correctness exists—especially when the charge comes from a source identified as “conservative”—they nonetheless eagerly pursue a policy of political correctness, subjecting speech, the curriculum, hiring and recruitment practices, and myriad other things to political tests.

Gitlin knew this, and it made him unhappy.

Accordingly, his difficult task was to distance himself from the essentially repressive practices of today’s radicals, without tarnishing his own radical credentials.

This made for some interesting, if not convincing, intellectual acrobatics.

Gitlin concluded that radical curricular reforms, which led to the establishment of black studies programs, feminist studies, and so on, have been a “net good;” at the same time, he decried the identity politics they presuppose as “a very bad turn for American life.”

The movement for political correctness is “virtually self-satirizing,” but among its “benefits” are instilling “a sense of community” among its partisans.

A self-satirizing benefit is only one of the wondrous creations Todd Gitlin conjured up for his readers’ entertainment.

One of his chief targets is that species of identity politics that makes leftish “bridge building” impossible.

And to this end, Gitlin presents himself in the role of conciliator, welcoming all (left-leaning) people into his big tent.

At the same time, his liberal white guilt over past injustices keeps intruding: “Why,” he asks, “should the descendants of slaves have to make compromises, pitch in, help form majorities?”

The answer, of course, is because they are no longer slaves but citizens, but that is not an idea that Gitlin entertains.

There are two main themes and one underlying assumption in “The Twilight of Common Dreams.”

The themes are, first, that the Enlightenment idea of a common humanity that transcends such contingencies as race, sex, class, and ethnic origin articulated a worthy, universalist ideal and that (the second theme) this ideal has been jeopardized with the rise of identity politics, multiculturalism, etc.

Put in this bald fashion—something that Gitlin is careful to avoid doing—one might think that Gitlin had turned over a new, conservative leaf.

After all, conservative writers have been making this basic argument ever since the phenomenon of identity politics was first descried.

But Todd Gitlin’s underlying assumption was that the conservative attack on political correctness, multiculturalism, and their attendant social and intellectual pathologies, is fundamentally unsound because … well, because it is conservative.

I am not sure that Gitlin is an especially good guide to the nature of Enlightenment ideals.

For example, his observation that “the Enlightenment says human beings are born and die, and in between, they seek to live” does not inspire much confidence on this score.

Nor was it clear that the Enlightenment ideals he wished to champion are historically the sole possession of the Left, as he seems to assume.

In fact, it is not even clear that they are exclusively the products of the Enlightenment; the idea of a universal common humanity, for instance, is at least as old as Christianity.

In any event, the maunderings of Jean-Jacques Rousseau do not, fortunately, exhaust the riches of the Enlightenment.

Gitlin is desperate to claim the mantle of the Enlightenment for the Left, and he is willing to go to considerable, indeed, tendentious lengths to do so.

Thus: “the idea of the Left and the idea of America share a history—I am tempted to say also a destiny. They are the two great, heavily burdened ideas of the Enlightenment.”

What he does not understand is how the very logic of radicalism, by absolutizing freedom, leads inexorably to tyranny.

This is one of the chief lessons of the French Revolution, which begins with Rousseau and ends with Robespierre.

It is not an accident that the French Revolution was conceived and prosecuted as a triumph of Rousseavian “virtue.”

Nor is it surprising that the virtue that appeared as a species of narcissism in Rousseau should turn rancorous when it entered upon the stage of politics.

Not for nothing did Robespierre speak of “virtue and its emanation, terror.”

Gitlin’s discussion—or, rather, invocation—of the legacy of the Enlightenment was not the only vertiginous thing about his book.

His unremitting effort to lodge all virtue with the Left makes for a veritable chapbook of silly remarks, to wit: “What we are witnessing in the culture wars is not the triumph of the Left but its decline.”

Or: “The Republican tilt of white men is the most potent form of identity politics in our time.”

In his effort to salvage an attractive universalism of the Left, Gitlin was constrained to explain—or explain away—a number of inconvenient realities.

Consider, for example, the rampant anti-Americanism of the New Left: Remember “Amerika,” flag-burnings, the vitriolic and frequently violent demonstrations against every aspect of American society.

From the perspective of the 2020s, it all looks like a tryout for the riots of BLM and Antifa.

According to Gitlin, such anti-Americanism was “more a sentiment than a commitment.”

No, I am not sure what that means, either.

In one inadvertently telling passage, he explained that a “sufficiently broadminded onlooker” would have discerned that the anti-American antics of the New Left and the thousands they influenced were really only “the rage of the rejected child, pleading to be let in and loved.”

Those who rejected the New Left, he went on, were “too narrow, too resentful, too negative” in their Americanism; moreover, they were too literal, taking the attacks mounted by such spokesmen for the New Left as Abbie Hoffman “at face value.”

How ought they have been taken?

At bottom, “The Twilight of Common Dreams” is a book by a man of the Left who had been outflanked by the Left—something for which he could forgive the Right.

That is to say, Todd Gitlin wanted to blame conservatives for the crepuscular gloom he discerns settling over his most cherished ideas.

He was an old-style political activist who could not acknowledge that the triumph of his principles led to the eclipse of his ideals.

He bemoaned the fact that the Left had been (in the words of one of his chapter titles) “Marching on the English Department While the Right Took the White House.”

But there is an important sense in which this very phenomenon is at the heart of his subject, the culture wars.

Far from signaling a “decline” of the Left, the institutionalization of radical sentiment in the university, the media, Hollywood, and indeed, in the landscape of American life represents the triumph of the ideals Gitlin and his comrades had been fighting for since the early Sixties.

The startling and depressing fact is that conservative electoral victories made nary a dent in the march of left-wing attitudes and ideas in our culture.

That Gitlin’s ideals look different when actually realized from when he dreamed about them as a 20-something radical is a painful but common irony that attaches to all utopian projects.

The real importance of Gitlin’s book lay not in its analysis of the culture wars but in its status as a specimen of the kinds of rationalizations we can now expect from one large precinct of leftist ideology.

On most cultural matters, Gitlin came down firmly on both sides of the issue.

He grudgingly acknowledged that conservatives have “accurately observed” the radicalization of “Harvard, Hollywood, the Modern Language Association, … the National Endowment for the Arts,” and so on.

But he dismissed the significance of those observations with a host of anodyne clichés and equivocations: when it comes to the culture wars “the issue is not the issue,” there are “two sides to all the usual disputes,” and so on.

The overall effect of Gitlin’s efforts to explain why America is “wracked” by culture wars is to trivialize the issues over which those wars are being fought.

This was partly because Gitlin insisted on blaming conservatives for the factionalism he discerned on the Left.

But it was also, I suspect, partly because he did not really take the culture wars very seriously.

Todd Gitlin was most at home in that realm where “rights” endlessly proliferate and the chief thing necessary for occupying the high moral ground is plenty of talk about racism, exploitation, and the perfidy of American society.

Thus at the end of his book, he spoke of “the right to a job, education, medical care, housing, retraining over the course of a lifetime” as “the bare elements of an economic citizenship that ought to be universal.”

One can be sure that, were such “rights” acknowledged, Gitlin would be back instanter with a more extravagant list.

Toward the end of his book on the Sixties, Gitlin noted that he wrote “not just about history but imprisoned within it, enclosed within the aftermaths of the Sixties, trying to peer over the walls.”

Those walls have been higher and more confining than he perhaps bargained for.

Gitlin offered himself as a champion of the Enlightenment and its ideal of common humanity.

Yet his idea of universality had a distinctly gauchiste tang to it.

In his short classic “What is Enlightenment?” Immanuel Kant wrote that the motto of Enlightenment thought was Sapere aude! “Dare to know!”

Todd Gitlin wanted us revise Kant to read, “Dare to be Left!”

It’s not an Enlightenment that everyone will want to embrace.