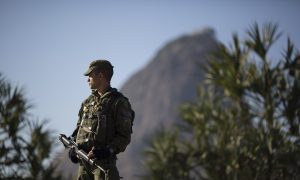 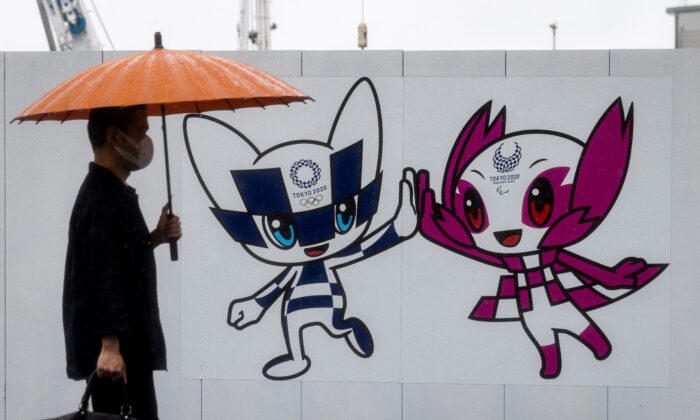 A pedestrian walks past a Tokyo 2020 Olympic and Paralympic Games decoration board bearing illustrations of Games mascots Miraitowa (L) and Someity (R) in Tokyo, Japan, on May 27, 2021. (Behrouz Mehri/AFP via Getty Images)
Viewpoints

With the Olympic Games in Tokyo only weeks away, National Basketball Association professionals such as Damian Lillard, Devin Booker, and Jayson Tatum are joining the roster. Americans may be unaware that prior to 1992 the U.S. Olympic basketball team was all collegians.

Back in 1972, Mike Bantam, Jim Brewer, Tom Burleson, Doug Collins, Kenny Davis, James Forbes, Tom Henderson, Bobby Jones, Dwight Jones, Kevin Joyce, Tom McMillen, and Ed Ratleff formed the youngest squad the United States had ever fielded. The Americans won the gold medal, but it was stolen from them in one of the worst rip-offs in sports history.

In the gold-medal game, the Americans faced a more experienced Soviet team, for all practical purposes a professional squad. The Soviets led most of the way but in the closing seconds, with the United States behind 49-48, Illinois State’s Doug Collins picked off a Soviet pass and drove for a layup.

Soviet player Zurab Sakandelidze rammed Collins into the basket stand with such force that the American collapsed to the floor. Collins took some time to get up. But in one of the great plays of all time, he sank both free throws to put the U.S. team up 50-49. The Soviets failed to score during the final three seconds and the buzzer sounded to end the game. The United States had won the gold and maintained their Olympic record.

As the young Americans celebrated their hard-earned victory, Renato William Jones, Secretary General of FIBA, the international basketball organization, came out of the stands and ordered the officials to put three seconds back on the clock. Jones, a friend of the Soviet Union, had no authority to make such a demand but the Olympic officials duly complied. They put time back on the clock not once, not twice, but three times. The third time the Soviets scored a basket and an Olympic panel voted 3-2 to give the Soviets the win.

The Americans decided not to show up for the silver because they had won the gold fair and square, on the court. They were right, and there is no other side to this argument. FIBA boss Jones wanted the Soviet team to win, which he confirmed with his post-game statement: “The Americans have to learn how to lose, even when they think they are right.” So the Americans were not only ripped off but taunted.

In 1976, the Olympic games moved to Montreal, Canada. The president of the United States was Gerald Ford, prone to falls and afraid of offending the Soviet Union. Indeed, that year Ford went on record that there was “no Soviet domination of Eastern Europe,” like saying there is no Chinese domination of Tibet. A man of that mindset is not going to demand that the 1972 team get the gold they won, otherwise the United States isn’t coming. The U.S. men’s basketball team won the gold, at Montreal, but that did not erase the debacle of Munich.

President Jimmy Carter took no stand for the 1972 squad and in 1980 boycotted the Moscow Olympics because of the Soviet invasion of Afghanistan.

President Ronald Reagan had a chance in 1984, when the Soviets boycotted the games, and again in 1988. Both times he failed to restore the stolen gold and in 1988, a strong United States team lost the gold medal to the more experienced Soviets.

In 1992 in Barcelona, with NBA professionals playing for the first time, the “Dream Team” of Michael Jordan, Magic Johnson, Larry Bird, Charles Barkley, Karl Malone, John Stockton, Patrick Ewing, David Robinson, Clyde Drexler, Scottie Pippen, Chris Mullin, and Christian Laettner steamrollered all opposition. The result would have been the same in 1972 if NBA all-stars such as Wilt Chamberlain, Jerry West, Spencer Haywood, and Oscar Robertson had been allowed to play.

In 1992, President George H.W. Bush did not step up for the squad. Perhaps he thought it might threaten his vaunted “new world order.”

In 1996, with the Olympics in Atlanta, President Bill Clinton did nothing, but as the abandonment continued, the case for restoring the Americans’ gold medals grew stronger.

In January 2017, the International Olympic Committee found that in 2008 Jamaican sprinter Nesta Carter, teammate of Usain Bolt, had violated anti-doping rules. Therefore, the entire Jamaican 4×100-meter relay team would have to return their gold medals, which now belong to the team from Trinidad. By that standard, the Americans should get the gold medals they won fair and square in 1972.

President Donald Trump had a shot but the pandemic bumped the Olympics to 2021. The chances that President Joe Biden will act range between slim and none.

It was also at the 1972 games that Palestinian terrorists kidnapped and murdered 11 Israeli athletes. The first case of terrorism at the Olympics also had a sequel of sorts.

The next year, Israeli commandos killed Muhammad Abu Youssef al-Najjar, mastermind of the Munich operation. Yasser al-Najjar, the terrorist’s son, became a fugitive, and in one account came to the United States, though documentation of his arrival is hard to find. A man named Ammar Campa-Najjar worked in the Obama administration, which did not reveal that Ammar was in fact the grandson of the Munich terrorist mastermind.

That reality emerged in a February 2018 Haaretz report headlined “Grandson of Munich Massacre Terrorist Is Running for Congress.” The revelation was not in the campaign materials of grandson Ammar Campa-Najjar, which said only that he was “the son of a Mexican American mother and a Middle Eastern immigrant father.” The Democrat came billed as a “Latino Arab-American.”

Ammar Campa-Najjar lost in 2018 and 2020 but will doubtless try again. What happens in Munich doesn’t stay in Munich, except for the 1972 U.S. Olympic basketball team.