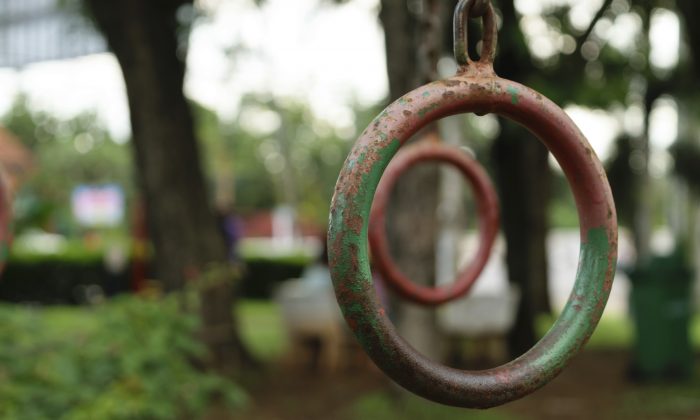 A file photo of a playground. At the Ariel Primary School in Zimbabwe, on Sept. 16, 1994, dozens of children purportedly witnessed the landing of a disc-shaped craft in the schoolyard during their break and encountered two strange beings who emerged from the craft. (Pong Moji/iStock)
Beyond Science

Yesterday was the 21st anniversary of a purported alien encounter that gained much attention worldwide before fading from the limelight. The impact of the event has remained vivid for the 60-plus students at the Ariel School in northeastern Zimbabwe and other locals who witnessed it.

A film titled the “Ariel Phenomenon” by filmmaker Randall Nickerson is due to be released this year. It includes new interviews with the students, who were deeply marked by the experience and recall it in detail to this day. The film also includes footage shot directly after the incident in 1994, showing the students discussing what they witnessed with Harvard psychiatrist John E. Mack. It was Mack’s opinion, after extensive interviews with the witnesses, that they were not making it up.

The children described a disc-shaped aircraft landing near the school. Strange beings were said to have approached the students.

Tim Leach, BBC Bureau Chief for Zimbabwe, also interviewed the children immediately after the event. Leach told Nickerson that the event, “gave me a new perspective on life, the universe, and everything really.”

“I would have not missed that for the world,” he said.

Dr. Mack (1929–2004) faced much criticism for his work with people who reported alien encounters, which extended beyond this one incident. The John E. Mack Institute website states: “Mack’s interest in the transformational aspects of these extraordinary experiences, and his suggestion that the experience may be more transcendent than physical in nature—yet nonetheless real—was largely reported in the media as a simple endorsement of the reality of alien encounters.”

In 1994, the Dean of Harvard Medical School Daniel C. Tosteson confidentially had peers review Mack’s work. When the review came to the attention of the public, it stirred some controversy. But after 14 months of inquiry, Harvard issued a statement saying that Mack “remains a member in good standing of the Harvard Faculty of Medicine.” The dean reaffirmed “Dr. Mack’s academic freedom to study what he wishes and to state his opinions without impediment.”

The dean did, however, urge “Dr. Mack that, in his enthusiasm to care for and study this group of individuals [people who believe they have been abducted by aliens], he should be careful not, in any way, to violate the high standards for the conduct of clinical practice and clinical investigation that have been the hallmark of this Faculty.”

Sean Christie, a reporter for African publication the Mail and Guardian, followed up last year on the Ariel School event. He wrote: “Astronomers across the region soon reported that the ‘pyrotechnic display,’ seen as far afield as Zambia and Botswana [at the time of the purported alien encounter at the Ariel School], had been a meteor shower.”

A local UFO expert, Cynthia Hind, said she had, however, recorded dozens of reports of a capsule-like fireball flanked by two smaller capsules.

Christie interviewed one of the students, who chose to withhold her name from publication. This student told him that the children had witnessed the event while in the schoolyard on break. When they told the teachers about it afterward, the teachers told them to be quiet and dismissed it. “But the next day, the school received a bunch of calls from parents wanting to know why their kids were spooked. It got so that the teachers started to freak out, too,” she said.

Randall is still seeking funding to wrap up production of “Ariel Phenomenon.” Award-winning editor Christopher Seward (who worked on Michael Moore’s “Fahrenheit 9/11,” “Sicko,” and “Fat, Sick and Nearly Dead”) has joined the team. An exclusive trailer for the film can be viewed on www.ArielPhenomenon.com.

“Ariel Phenomenon” Director Randall Nickerson in 2008 at the landing site of the craft at the Ariel School. #Ufo pic.twitter.com/Ro8OMWrJqt

An interesting drawing from one of the Ariel School witnesses. #ufo #witness #aliens #Extraterrestrial #paranormal pic.twitter.com/MQmevrcoYg

“This had all the marks of an authentic experience” -John Mack, M.D. discussing the Ariel School sighting #ufo #alien pic.twitter.com/PaImCwNnd2