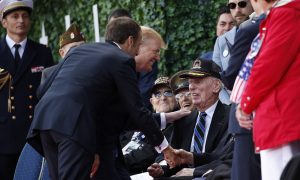 Trump Praises D-Day Veterans: 'You Are Among the Very Greatest Americans Who Will Ever Live'
0
Share Now
TelegramFacebookTweetEmailTellMeWeReddit
Copy Link 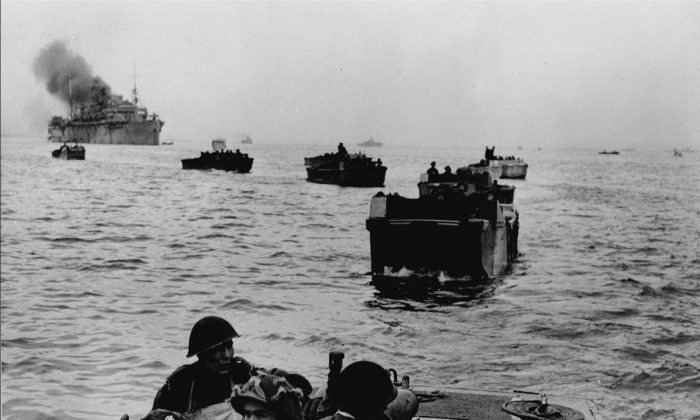 Canadian troops in the course of D-Day landings on the Normandy coastline, France, on June 6, 1944. (National Archives of Canada/CP Photo)
Viewpoints

By some estimates, 2,520 veterans of the D-Day operation, the largest amphibious invasion in history, remain alive in 2021. Less well known are the troops of the First Special Service Force (SSF)–an elite group of Canadian and American fighters every bit as crucial to the victory over National Socialist (Nazi) Germany.

The Canadians were drawn from regiments such as the Royal Winnipeg Rifles, while the American ranks included lumberjacks, miners, and former bodyguards for Hollywood stars. At Fort Harrison in Montana, they trained in parachuting, skiing, hand-to-hand combat, and mountain climbing—skills soon to be put into practice.

After a campaign in the Aleutians, the SSF was off to Italy, where from Dec. 3 to 6, 1943, they engaged the Nazis at Monte la Difensa. The heavily laden SSF troops climbed the 3,120-foot peak through dense fog and snow. After this ordeal, easily the equivalent of a triathlon, the Canadians and Americans engaged the well-equipped Germans and after a fierce battle prevailed.

The SSF, also known as the “Devil’s Brigade,” repeated the feat at Monte la Rementanea and a month later took Monte Majo, which opened the Via Caslina, the main road to Rome. The SSF also fought at Monte Vishchataro, Anzio, Monte Arrestino, and Rocca Massima.

Despite their heroism, crucial to the Allied victory, the men of SSF have never received the recognition they deserve. Neither has Canada’s Eighth Canadian Reconnaissance Regiment, which included this writer’s uncle, James Richard Billingsley. Wounded twice in battle, once by a Nazi sniper, he returned to the front and fought on.

The motto of the Eighth Reconnaissance was “first in, last out.” True to form, on April 12, 1945, the regiment’s “B” squadron liberated Camp Westerbork in Holland, a Nazi transit station for Jews shipped to extermination camps at Auschwitz and Sobibor. The Canadians liberated 876 inmates and their actions surely saved many other lives.

The men of the Eight Reconnaissance, the SSF, and the D-Day forces would be surprised to hear that they fought to uphold something called “white privilege.” In reality, the privileged types were those who, though of age and able-bodied, declined to fight in World War II. They were known as “zombies” and the most notable Canadian zombie was future Prime Minister Pierre Elliott Trudeau.

In 1944, if anyone dared to call an SSF man a fascist or Nazi, that person would have needed immediate medical attention. In 2021, Allied veterans would be surprised to hear people of a conservative bent called Nazis, fascists, extremists, and so forth. That used to happen when people ran out of arguments, but for people on the left, name-calling is now their first resort.

The Canadians and Americans who scaled Monte la Difensa, stormed the beaches on D-Day, and saved Jews from death camps would also be surprised at the vast ignorance of the conflict in which they fought. For example, in a debate last October, President Trump said, “Having a good relationship with leaders of other countries is a good thing.” Joe Biden shot back, “That’s like saying we had a good relationship with Hitler before he in fact invaded Europe.”

As Conrad Black noted, U.S. relations with Hitler were frosty from the start in 1933, and President Roosevelt withdrew the American ambassador after the infamous “Kristallnacht” pogroms in November of 1938. Biden’s claim that Hitler “in fact invaded Europe” is also a problem.

On Aug. 23, 1939, Hitler’s Nazi regime signed a pact with Communist dictator Joseph Stalin of the Union of Soviet Socialist Republics. The pact provided cooperation on trade, military technology, cultural exchange, and contained secret protocols that divided up swaths of Europe.

On Nov. 30, 1939, Stalin invaded Finland. And on Dec. 14, the League of Nations expelled the USSR. The outgunned Finns duly turned back the Red Army, but Stalin continued to support his Nazi ally. On April 9, 1940, Hitler invaded Denmark and Norway.

On May 10, 1940, Hitler invaded France, Belgium, Luxembourg and the Netherlands, with full approval of the USSR. Then on June 22, 1941, Hitler turned the tables and invaded his Communist ally. One would think that a U.S. Senator running for president of the United States would be familiar with those facts.

The United States did not enter the war until after the Japanese attack on Pearl Harbor on Dec. 7, 1941. That gave hope to those suffering under Nazi tyranny, but victory was not a done deal. The heroes of Canadian-American Special Services Force helped turn the tide and preserve freedom for generations to come. The people in power today are not worthy to carry their shoes.