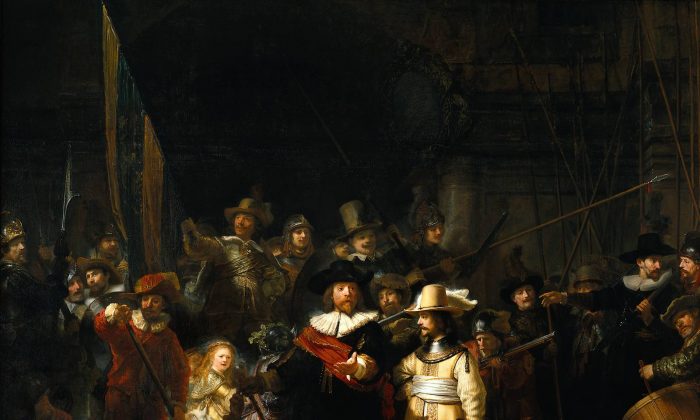 Technique in the Service of Illusion
By Siddhi Parikh

“The Night Watch” by Rembrandt has been leaving viewers speechless since 1642, though it’s gotten darker over the centuries. At over 149 inches by 178 inches, it was even bigger before it was cut down on the left side in 1715. The uncut version contained full or partial views of 34 human figures and one barking dog.

Eighteen of the former are the sitters named on the framed shield in the background. Some brandish pikes or partisans or double-edged swords while others do things with muskets.

In the painting are Captain Banning Cocq and his Lieutenant preparing to lead their company to an unspecified site of assembly or action. The Captain steps confidently forward with hand outstretched to give the order to his Lieutenant to march, when—bang! A gun goes off right behind their heads. We can see the barrel angle up from the Captain’s shoulder to the Lieutenant’s hat brim and we can make out the puff of fiery smoke it discharges perilously close to the ostrich plumes, which seem flattened back by the blast.

The perpetrator is the shooter between the Captain and the golden girl. He wears a large antique helmet and old-fashioned clothes. He’s one of six musketeers in the painting. You can barely make out two in the upper left background and one at the right behind the arm of the pointing sergeant.

Next to the red musketeer that girl materializes in a brilliant shaft of light, with another one barely discernible behind her. The girl, complete with drinking horn, purse, and dead chicken, stares either at the unruly shooter or at Captain Cocq himself.

Who is this strange intruder? She’s been variously called a kitchen girl, a symbol, and “a female dwarf.” Some militia portraits organized as banquet scenes include manservants. This is the only one I can recall that includes a female figure; a figure gorgeously dressed, centrally placed, scintillating with her own and the painter’s energy, and, above all, a pistol-packing figure not to be trifled with. You can see ends of the weapon lurking behind the chicken.

The golden girl has often been said to resemble pictures of Rembrandt’s wife, Saskia. It’s a likeness for which Saskia may or may not have had time to pose. She died in June of 1642, the year “The Night Watch” was completed. Why does Rembrandt include a figure whose proper place is not in the shooters’ parade but in the household? And who possibly was—or, at any rate, had been—a member of, the mistress of, the painter’s own household?

The time during it was created was called the Baroque Period—a time when every emotion was heightened to the maximum and fill the audiences with curiosity. The Baroque was a period of artistic style that used exaggerated motion and clear and easily interpreted detail to produce drama, tension, exuberance, and grandeur in sculpture and painting.

Baroque artists usually left the background in total darkness and the meanings were most of the times left for the viewer to comprehend.

The execution of details alone—the splendidly gleaming metal, the shimmering cloth, the various pieces of equipment and even more so the fashioning of the eloquent facial expressions succinct gestures and dazzling lighting effects are artistic in the highest degree.

“The Night Watch” ought to be cherished as political art. It portrays not only what the Dutch, but all democracies ought to hold dear—the courage of flawed human beings to come together while acknowledging one another’s individuality and difference. It is an icon of tolerance, diversity and the magic golden light that makes a society work. While these ordinary people stand guard, we feel a bit safer in our collective defiance of the dark.

Siddhi Parikh is a student of fine arts currently living in India and can be reached at siddhiparikh@gmail.com