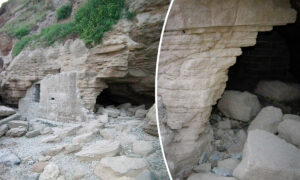 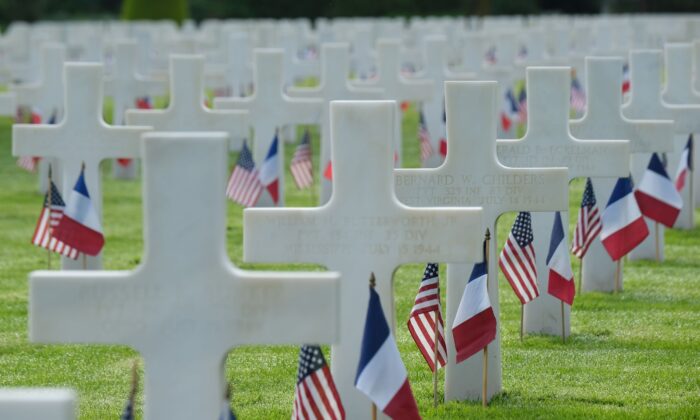 U.S. and French flags stand at the graves of U.S. soldiers at Normandy American Cemetery near Colleville-Sur-Mer, France on June 05, 2019. (Sean Gallup/Getty Images)
US News

Remains of WWII Soldier Found in Germany Are Identified

HARTFORD, Conn.—Human remains found in a cemetery in Belgium have been identified as those of a U.S. Army sergeant from Connecticut who went missing in Germany during World War II, U.S. officials announced Thursday.

The Defense POW/MIA Accounting Agency said testing showed the remains were those of Sgt. Bernard Sweeney of Waterbury. His body was disinterred in 2019 from Ardennes American Cemetery in Belgium, where it was buried with other unidentified soldiers after having been recovered from a minefield near Kleinhau, Germany, in 1946.

The identification was announced the same day that the agency the remains of a World War II pilot whose body was lost in Europe’s Adriatic Sea have been recovered. The remains of U.S. Army Air Forces 2nd Lt. Ernest N. Vienneau were accounted for in April. He will be buried in his hometown of Millinocket, Maine, on Oct. 9. Vienneau was 25 at the time of his death.

Sweeney, 22, was reporting missing in action on Dec. 16, 1944, after his unit battled German forces in the Hurtgen Forest near the Belgian border, the agency said. He was assigned to Company I, 330th Infantry Regiment, 83rd Infantry Division.

Sweeney’s great-niece, Tammy Hynes, his oldest, closest living relative, said her family is delighted over the identification, and thankful for the military’s efforts. Sweeney was her grandfather’s brother.

“I have some pride there and some really good feelings about what he did for all of our country, and the fact that they went to these great lengths to identify him and honor him in the way I think he should be honored for what he did, for giving his life for our great country,” said Hynes, 54, of Cape Coral, Florida. “I really wished my dad was still alive to know this.”

Hynes said funeral and burial services are still being planned. She said her family is trying to find the grave of Sweeney’s mother, who apparently killed herself after being told her son died in the war, and bury him next to her.

After her father died five years ago, Hynes said she was going through his belongings and found letters Sweeney wrote during the war. She said he wrote about women he wanted to marry when he got home, being promoted to sergeant, and other topics.

Within the past several years, the military has seen a surge in identifications of U.S. service members who had been classified as missing in action. In 2018, the Defense POW/MIA Accounting Agency identified the remains of another soldier killed in the Hurtgen Forest battle, Army Sgt. Melvin Anderson of Omaha, Nebraska.

The Army has called the Hurtgen Forest battle one of the longest and deadliest for U.S. troops during World War II. It ran from September 1944 to February 1945, and more than 33,000 U.S. troops were killed or wounded.

After the war ended, the American Graves Registration Command was assigned to investigate and recover missing American personnel in Europe. It performed several investigations in the Hurtgen area, but wasn’t able to find Sweeney’s remains. He was declared non-recoverable in 1951.

More than six decades later, a historian for the Defense POW/MIA Accounting Agency studying unresolved American losses in the Hurtgen area determined that one of the unidentified remains recovered from the minefield near Kleinhau possibly were those of Sweeney, the agency said.

His body was exhumed from the cemetery in April 2019 and sent to the agency’s lab at Offutt Air Force Base in Nebraska for identification. Scientists positively identified Sweeney in June after using dental and anthropological analysis, collecting circumstantial evidence, and testing DNA from the remains with a DNA sample provided by one of Sweeney’s relatives.