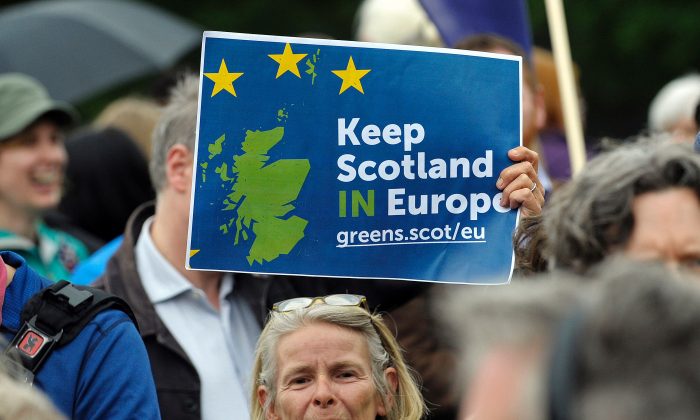 A woman holds up a placard at a demonstration by Pro EU campaigners outside the Scottish Parliament ahead of a debate on the EU Referendum result and the implications for Scotland, in Edinburgh, Scotland on June 28, 2016. The Scottish National Party is weighing another referendum on Scotland separating from the U.K. after the “leave” side won last week’s Brexit referendum. (ANDY BUCHANAN/AFP/Getty)
Canada

Quebec and Scotland tend to admire the EU, while tempted by secession at home
By Matthew Little

Secession is a serpentine word, threatening and mysterious, though alluring to those who see sovereignty as the path to self-determination.

A slim majority in the United Kingdom preferred it to what many saw as an imperious European Union effort at supranational union.

A majority in England and Wales, two of the U.K.’s four constituent countries, voted that way. The other two, Northern Ireland and Scotland, did not. Scotland, which held its own referendum in 2014 on seceding from the U.K., is devastated by the Brexit vote. Many in Canada’s French speaking province of Quebec, which held two secession referendums, seem to understand the sentiment.

The remain side won a 1980 Quebec referendum solidly but won a second 1995 referendum, made controversial by a fuzzy ballot question, by a razor thin .7 percent. Nearly 2 percent of ballots were blank or invalid.

Quebecers evaluating Brexit tend to be sympathetic to remain. They see the EU as promising the chance to be a sovereign state but with the security of a larger economic and political union.

Jean-Jacques Hubert of Montreal captured the sentiment of many in Quebec: “Great Britain is an island and it is not the Great Britain of 200 years ago. … I do not see the advantage of separating from EU, not at all,” he said.

Scots generally feel the same, concerned that secession will hurt the economy, leave them isolated from the opportunities of EU membership, and exclude their children from work on the continent.

That the English managed to pull their country out of the EU—outweighing the Scottish and Northern Irish vote with a little help from the Welsh—was little inspiration for another referendum in Quebec.

Quebecers are largely done with any dalliance with secession. Sovereignty has become a word to make one weary. After two referendums, the dream is not dead for all, but it is irrelevant for most.

Ask someone on the street if they think Quebec might be inspired by Brexit to hold another referendum, and this is what you will commonly hear:   ”I don’t think so anymore. Most of people do not believe it either, I think,” said Georges Maukovic, also in Montreal.

“For a few people yes, but not for Québec’s people,” said Guy Lalumière.

After decades of debates on separatism, today Quebecers want a better quality of life, better jobs, and a federal government that responds to their priorities.

Political parties founded to split Quebec from Canada now pay a political price in the form of lost votes if they drone on about it too much. Those parties now exist to fight for Quebec’s social programs and cultural identity, rather than cook up plans to start a new country.

For the Scottish, however, last week’s Brexit vote has brought the secession water back to a boil.

Of the U.K.’s four constituent countries, Scotland was the most decisive in wanting to stay in the EU. While the leave camp won by 7 percent in England and 5 percent in Wales, the remain side won by 11.6 percent in Northern Ireland and an overwhelming 24 percent in Scotland.

Scotland’s First Minister and leader of the Scottish National Party, Nicola Sturgeon, is well aware of that and has already gone to Brussels to try to broker a deal with the EU to keep Scotland in.

But with the leaders of Spain and France opposed to those talks, it is all but impossible for Scotland to get the unanimous support from the EU’s member states that it needs.

Sturgeon and others have begun talking about another referendum on Scottish sovereignty. Scotland’s Sunday Post newspaper commissioned a poll that found 60 percent support independence following the Brexit vote.

In Scotland’s capital city, Edinburgh, the loss of Europe is still raw and people are still grappling with the new reality.

Even Alison Hardy, who wanted to vote leave but was persuaded to vote remain by her sons who were worried about their professional futures, was disappointed.

“Everybody’s going around like headless chickens just now. Nobody really knows what the future is going to bring,” she said.

Her husband, John Hardy, retired from telecoms, had grim predictions.

”I think it’s going to be a disaster. Economically we are going to underperform for the next five to ten years. Given my age, that is a large part of my remaining life,” he said.

If there is an upside for folks here, it comes in the possibility of political reform in the U.K., where regional income disparities are notable, as well as in the EU, where overreach has gained the superstate a choir of critics singing national anthems.

”There definitely does need to be reform,” said June Thorburn. “This may give [the EU] the wake-up call to do the reforms required. But because we are no longer in it, we may not benefit.”

The “remain” camp argued EU membership was a boon to the economy. A majority of voters across the U.K. disagreed. In Montreal, another casual observer tried to sum up the discrepancy.

“They don’t feel represented by the government, and that is the fundamental problem,” said Johannes Van Der Horst, a Toronto resident who was in Montreal for a visit.

“People feel they are suffering and either through neglect by the government or lack of leadership from the government, this can be channeled into separatist movements,” he said.

Separatism and nationalism can look similar, depending on the context. They can also look like democracy in action. Or, as many Scots believe about the English rejection of the EU, and many Democrats believe about Trump supporters, they can look like misinformation and scare tactics run amok.

But for many of those who voted “leave” in the U.K., it was from concern their government handed too much power to the distant authority of the EU. Under that belief, the reasonable response was to shrink the distance between the power and the people, even if it risks shrinking the economy and territory of the U.K. as well.

With reporting by Rosemary Byfield in Edinburgh, Scotland, Frédérique Binette in Montreal, Quebec, and Nathalie Dieul in Val-David, Quebec.