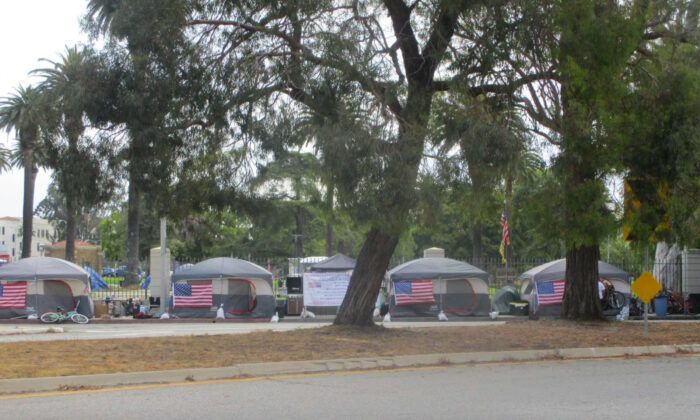 Walk-in tents that have been purchased and set up for homeless veterans during the COVID-19 pandemic line the street outside the perimeter fence of VA campus in West Los Angeles, Calif., in May 2020. (Courtesy of Robert Rosebrock)
Southern California

LOS ANGELES—Sheriff’s deputies joined outreach crews and federal officials on Nov. 1 in relocating homeless individuals in the ‘Veterans Row’, in hopes of clearing up this longtime homeless encampment near Brentwood.

Besides decrying the encampment as an eyesore in the upscale neighborhoods for long, some Brentwood residents were also dismayed that many veterans were forced to live in ramshackle tents erected on the sidewalk, in the shadow of the West Los Angeles Veterans Affairs campus nearby.

At least two homicides have occurred at the encampment, most recently in September, when a man was stabbed when he tried to intervene in a dispute between a man and his girlfriend, authorities reported.

U.S. Veterans Affairs Secretary Denis McDonough recently toured the encampment and vowed last month to find temporary housing for about three dozen homeless veterans living there. He also indicated the VA would work to provide housing for another 500 veterans in the Los Angeles area by the end of the year.

“The VA, they’re committed to offering services around the clock,” Sheriff Alex Villanueva told reporters at the site. “They’re trying to get the staffing, which is a huge improvement…so that is a big help. So now, someone shows up here at 10 o’clock at night, odds are they’re going to be able to find a place to lie down, and it’s not going to be on the sidewalk.”

At least one homeless person of the encampment told KNX Newsradio that he was looking forward to moving into sturdier structures with running water. The new facilities of secure tents and tiny homes also provide meals.

A small section of the encampment had been dismantled by mid-morning Monday, with crews picking up trash accumulated on the sidewalk.

It was unclear exactly how many people were in the encampment, which has been in place for about two years, or how long it would take to complete the relocation effort.