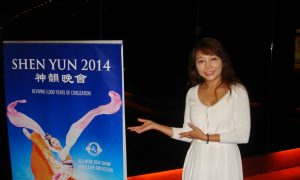 WASHINGTON—Persecution for religious belief in Vietnam is growing worse, according to witnesses that appeared at the a recent congressional hearing.

For the first time in the history of the Tom Lantos Human Rights Commission commission, witnesses testified from Vietnam via video. All the witnesses agreed that the Vietnam regime is tightening up on freedom of expression and association as well as imprisoning religious leaders, dissidents, and human rights defenders, some with long sentences.

Further, the regime has adopted insidious practices designed to disrupt religious expression. One particularly egregious violation of freedom of religion is the government’s common practice of requiring renunciation of faith.

Speaking live from Vietnam on March 26, Father Phan Van Loi said, through translation, that many practical activities of the Catholic church are limited or forbidden by the regime’s decrees. Religious organizations are not recognized as legal entities. The government controls the recruitment, ordination, and assignment of the clergy, he said. It also strictly controls travel abroad of church members and clergy.

“Property of the Catholic church has been increasingly confiscated. Land can be used, but not owned, by the church,” said Loi, 63, who was secretly ordained in 1981. He was imprisoned for seven years, and he has been under house arrest since 2001. He is editor-in-chief of the outlawed bimonthly magazine Freedom of Speech and co-founder of the Association of Former Vietnamese Prisoners of Conscience.

Also testifying from Vietnam was Sub-dignitary Nguyen Bach Phung, a clergy member of an independent Cao Dai Sect. She provided dates and names of people who had been assaulted by police for failing to seek permission from the state-controlled Cao Dai Governance Council when conducting ceremonies. In one case, a person was sentenced to 18 months of imprisonment on March 14 for building a funeral facility that the regime disapproved of.

Phung’s home was surround by police as she testified. Committee Chairman Rep. Frank Wolf (R-Va.) requested of someone present from the State Department to take a message to the American ambassador in Vietnam to have him check on the well-being of the commission’s two witnesses from Vietnam.

“The government created a fake civil society organization, namely, the Committee for Solidarity of Vietnamese Catholics … to manipulate the internal affairs of the Catholic church and deceive the outside world,” said Loi.

The regime has created state-controlled churches for other religions as well, according to Loi. These state churches are directed by the regime and exist side-by-side with the orthodox churches, with the “purpose of dividing the traditional churches.” He said that they are “peripheral entities of the Communist Party” and participate in the Fatherland Front, a political organization under the leadership of the Communist Party of Vietnam.

In 1975 at the end of the Vietnam conflict when Hanoi took over the whole country, it disbanded the leadership of all independent-minded religious organizations, and the communists appointed new leaders of these organizations. Per the 2004 Ordinance on Religion and Belief, the regime requires all religious organizations to be registered and their activities pre-approved. Refusal to register risks having one’s activities deemed illegal and exposes members to arrest and harassment.

“More recently, the 2013 Government Decree 92 banned all religious, cultural, and traditional activities—even when conducted in private homes—unless they are registered, pre-approved, or officiated by a government entity,” states a Lantos Commission statement.

“Despite government control, the number of religious adherents continues to grow in Vietnam,” states the 2013 annual report of the U.S. Commission on International Religious Freedom (USCIRF), an independent federal government commission.

Wolf voiced outrage that the Obama administration, like the previous Bush administration, will not designate Vietnam as a “country of particular concern” (CPC), which would then enable sanctions of various kinds to be applied to effect change in Vietnam’s policies. Vietnam was a CPC in 2004, but the State Department lifted the country from the CPC list in 2006. During the period when Vietnam was a designated CPC, Vietnam partially fulfilled a U.S.-Vietnam bilateral agreement to release prisoners and end the forced renunciations of faith.

“Ethnic minority Protestants and Buddhists and religious groups that seek to operate independent of government control continue to experience severe abuses, including arrests, forced renunciations of faith, and long-term incarcerations.”

The report continues, “Lingering property disputes over land or facilities owned by the Catholic church or Catholic villages, have led to church demolitions, property confiscations, detentions, and violence.”

Commissioner from the USCIRF, Eric P. Schwartz, testified: “Legal protections for religious groups are uncertain and subject to arbitrary or discriminatory interpretations based on political factors, and ethnic minority converts to Protestantism and Catholicism in particular face discrimination, intimidation, and pressure to renounce their faith.”

Attorney Yunie Hong, director of Policy Advocacy at Hmong National Development, testified that the people residing in large urban areas generally enjoy greater religious freedom. The improvements made during the period of CPC designation were absent in the remote provinces in the highlands, “where many ethnic minorities including the Hmong reside, and where access by outsiders is severely restricted.”

Hong said that the Hmong who reside in the remote northwest highlands have been converting to Christianity in large numbers since the late 1980s, growing from 0 to 400,000 believers. She cited the Christian publication Compass Direct News, which she said the State Department trusts to use in its reports.

The Vietnamese regime regards the conversions to Christianity as a political threat. It perceives “Christianity as an American religion in direct conflict with communism and loyalty to the communist government,” said Hong. Consequently, the regime has launched a campaign to prevent the Hmong from practicing their Christian faith, “employing methods of destruction to try to keep them tied to their traditional animist backgrounds,” Hong said.

The battle is over burial practices. A Christian sect embarked on a more modern approach to burying the dead and has been building storage facilities for funerals in the village. The central government has sent specific directives to provincial officials to force the Hmong Christians back to their old way of burying the dead.

The government has sent policemen and thugs to destroy the facilities and arrest many Hmong villagers, who use their own bodies to protect the facilities.

The Montagnard peoples, indigenous to Vietnam and not ethnically connected to the majority of the Vietnamese population, are treated by the regime with even more suspicion and hostility than the Hmong Christians. They fought alongside the French and the Americans during the First Indochina War and the Vietnam War. The regime accused the Montagnard Christians that reside in the Central Highlands of being worshippers of an American religion and spies for the American Central Intelligence Agency, according to the testimony of Rong Nay, executive director of the Montagnard Human Rights Organization.

The regime forced the Montagnards off their ancestral lands in order to make the land available to Vietnamese migrants. The regime is also against their religion. Christian Montagnards, numbering approximately 500,000, are among the largest Christian group in Vietnam. Large peaceful protests demanding the return of their lands and the right to practice their religion erupted in 2001 and 2004—efforts that were crushed by the Vietnamese military, with hundreds of Montagnards killed and hundreds arrested and jailed up to 17 years, according to Nay.

“For decades, the government security forces have terrorized Montagnard Christians with a ceremony where the police force Christians to take a public oath renouncing their Christian faith,” testified Nay.

“The Montagnard are treated like an enemy in our own homeland, and we lost more than any group in Vietnam,” he said.

Schwartz recommended that the U.S. Congress pass the Vietnam Human Rights Act and the Fostering Rights through Economic Engagement in Vietnam Act.

Wolf noted that the former legislation, authored by Rep. Chris Smith (R-N.J.) who attended the hearing, has passed the House four times, and most recently it was nearly unanimous. However, Sen. John McCain (R-Ariz.) and then-Sen. John Kerry (D-Mass.) have blocked it from coming to a vote in the senate.

Before agreeing to any more U.S. government defense treaties and the Trans-Pacific Partnership with Vietnam, the Vietnamese regime should free all political and religious prisoners, said Nay.

“USCIRF also has long supported measures that would impose sanctions on individuals who are complicit in human rights abuses,” said Schwartz.