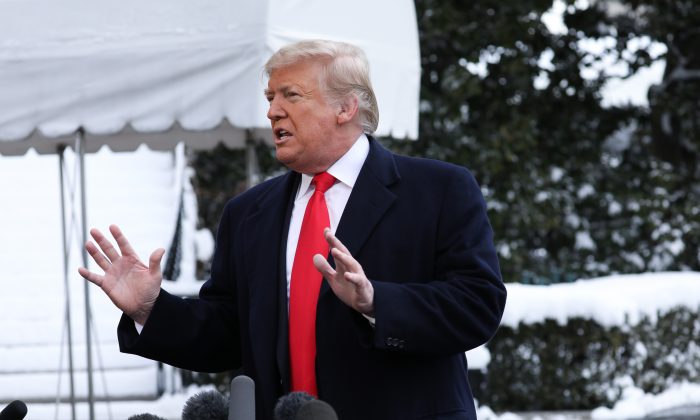 President Donald Trump speaks to reporters on the South Lawn of the White House in Washington on Jan. 14, 2019. (Holly Kellum/NTD)
US News

Religious Freedom Under Attack Both in US and Around Globe, Trump Says

Trump declared Jan. 16 to be Religious Freedom Day and called upon the nation to protect the heritage of religious liberty both at home and around the world.

“The right to religious freedom is innate to the dignity of every human person and is foundational to the pursuit of truth,” he said in a statement on Jan. 16.

“Efforts to circumscribe religious freedom—or to separate it from adjoining civil liberties, like property rights or free speech—are on the rise.”

According to Trump, legislative and political efforts to restrict individual liberty and conscience are the main culprit of attacks that occurred in recent years, such as the mass shooting at the Tree of Life Synagogue in Pittsburgh, Pennsylvania, in October last year. The attack killed 11 people, making it the deadliest attack on the Jewish community in the nation’s history.

Religious faith in America has been under attack for decades, according to Republicans. Former Speaker of the House Newt Gingrich, in his book “Trump’s America,” accuses the Obama administration of using political power to diminish religious freedom.

“Obama aggressively struck down regulations that would have protected religious groups from paying health care coverage for procedures which they opposed on moral grounds,” he wrote, adding that the Obama administration called pro-life advocates and other traditional conservatives “extremists.”

Soon after taking office, Trump started to reverse the anti-religious pattern and signed an executive order in 2017 to promote free speech and religious liberty.

“It shall be the policy of the executive branch to vigorously enforce Federal law’s robust protections for religious freedom,” the order stated.

He asked the Department of Justice to issue legal guidance to the executive branch on legal protections for religious freedom. The guidance, which was issued in October 2017, explains the fundamental religious liberty principles in the Constitution and statutes like The Religious Freedom Restoration Act (RFRA).

Congress passed the RFRA with near unanimous support 25 years ago. Since then, it has prevented the government from infringing on the freedom of individuals and groups to exercise their religious beliefs.

However, in recent years there have been many efforts to limit the application of RFRA, according to Acting Attorney General Matthew Whitaker.

“RFRA was authored by then-Congressman Chuck Schumer. It passed the House unanimously and was approved 97 to 3 in the Senate,” Whitaker said at a Heritage Foundation event Jan. 16.

Today, however, many of RFRA’s original supporters have changed their minds, he added.

“For example, we’ve seen nuns ordered to pay for contraceptives.”

And in recent years, the states that wanted to pass their own versions of RFRAs met with criticism and anger.

Religious Freedom Day is observed nationwide on January 16, which is the anniversary of the 1786 passage of the Virginia Statute of Religious Freedom. Authored by Thomas Jefferson, the statute served as an inspiration and model for the First Amendment, which was drafted by James Madison a few years later.

“I am concerned about the protection of the First Amendment and religious freedoms,” said Lasca Low, a retired federal employee who attended the Heritage event. “If we lose the moral base, we lose our country.”

She stressed the importance of protecting religious freedoms.

“It’s one of our basic freedoms to believe and worship as we wish. And I’ve seen a lot of that eroded just very subtly through the years and it’s alarming to me,” she said.

Religious Freedom Around the World

The Trump administration has also pushed for greater tolerance of different faiths by governments around the world.

“People are being persecuted for their faith by authoritarian dictatorships, terrorist groups, and other intolerant individuals,” Trump said in his statement on Jan. 16.

To address this problem, the U.S. State Department hosted its first-ever Ministerial to Advance Religious Freedom in Washington in July last year. More than 40 foreign ministers and representatives from 80 countries attended the meeting.

Religious-freedom conditions continued to worsen in countries around the world in 2017, according to the latest report by the U.S. Commission on International Religious Freedom. The report listed 10 countries, including China, as “countries of particular concern.”

China’s human-rights record has been criticized for decades. Religious groups and minorities in China—including Uyghurs, Tibetan Buddhists, Christians, and Falun Gong practitioners—face severe repression and discrimination from the Chinese government.

These communities have suffered from systematic arrest, unlawful imprisonment, torture, and brainwashing. More alarming is the forced organ harvesting from prisoners of conscience, which has become a multibillion-dollar industry, according to researchers.