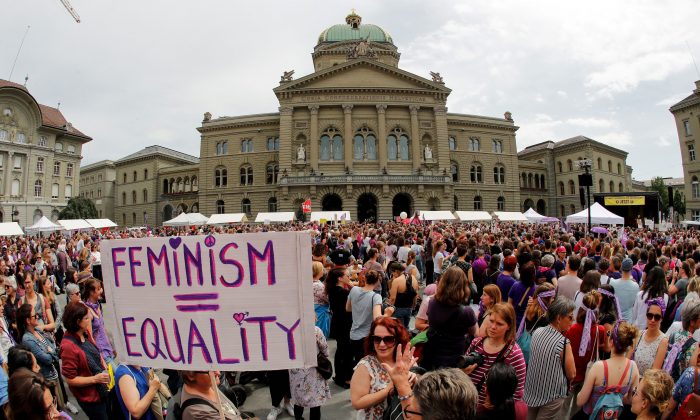 A woman holds a sign reading "Feminism = Equality" as she takes part in a nation-wide women's strike for wage parity outside the federal palace in the Swiss capital Bern, on June 14, 2019. Nearly 30 years after staging a first strike, women across Switzerland stage mass demonstrations for equal pay. Events planned throughout the day range from pram marches, to whistle concerts, to extended lunch breaks and giant picnics, with huge demonstrations planned on June 14 evening in several cities, including in front of the government in Bern. (Stefan Wermuth/AFP/Getty Images)
Viewpoints

Religious Fervor Among the Woke

The “woke” haven’t only adopted the ideology of “social justice” and “diversity, equity, and inclusion” (DEI) and assertions such as “diversity is our strength” (Canadian Prime Minister Justin Trudeau), but they adhere to these ideas not so much as preferred guidelines or scientific hypotheses, but as religious truths that aren’t to be questioned.

Any misguided or malevolent soul who does question these “unchallengeable truths” is considered to be a heretic who must be smote with extreme prejudice, what today we call “canceled”: censored, marginalized, silenced, fired, prosecuted at law, and erased from society.

What’s unquestionable for the woke isn’t the spiritual beings of traditional religions. Rather, it’s identity—the subjective adherence of an individual to a category of humanity, usually a category defined by sex or gender, race, sexual preference and practice, ethnicity, or ability or disability. But the woke are discriminating; not all identities are equal or justify respect or defense. Just as in traditional religions, not all spiritual beings are regarded as worthy of belief: Christians don’t recognize the spiritual authority of Shiva, Vishnu, or Ganesh. Orthodox Jews, while they might recognize Jesus as a Hebrew historical figure, don’t grant him spiritual authority. Muslims reject the trinity of the Catholic deity.

Woke discrimination focuses on the identities of categories of people; some categories are seen as negative, not worth defending, and often require attacking. Whites are regarded as evil, Asians are “white adjacent,” and Jews are “hyperwhite” and share in white evil. Zionists are hyper-evil, males are “toxic,” and Christians are knuckle-dragging fascists.

Wokeness is being aware of these enemies of virtue and coming to the defense of females (as long as they aren’t trans-exclusionary radical feminists), all BIPOC (black, indigenous, people of color), all LGBT, the disabled, the poor, and the homeless. Then, of course, there are those who are woke to the “existential threat” of climate change and the need to return to foraging, as long as one remains vegetarian.

You may wonder about the designation “religious” granted to wokeness. It’s worth remembering that definitions of terms such as “religion” aren’t empirical facts, but are conventions of arbitrary use. Definitions can be judged in terms of degrees of helpfulness or unhelpfulness in understanding, and it’s often useful to find the definition most suited to the purpose. It’s conventional to use the term “religion” for the worship of certain spiritual beings. But there’s also a functional type of definition that may be useful in elucidating some belief systems.

Anthropologist Clifford Geertz has provided such a definition:

Many ideologies that we would label secular, i.e., not about supernatural figures, are well described by this definition. National Socialism (Nazism) and communism have exclusivist ideologies with founding human deities, “holy” books, required ceremonies, visions of historical destiny, and severe penalties for heretics. Many people have had such faith in these ideologies that they committed the most horrid mass crimes with the belief that they were doing good.

Woke ideologies fulfill Geertz’s definition of religion by drawing on what might be a natural tendency of human beings to feel comfortable with people who are like themselves compared to people who are unlike them by emphasizing primordial identity characteristics such as sex and race and deeply embedded characteristics such as ethnicity and sexual orientation. The woke formulate “conceptions of a general order of existence” by defining society in the Marxist fashion as distinct classes of oppressors and oppressed and by applying that model to redefine relations between females and males, BIPOC and whites (and Asians and Jews), LGBT and heterosexuals, Muslims and Christians (and Jews and Zionists), and disabled and abled, the former in each pair a victim of the other who oppresses them.

The woke, in drawing their class conflict picture, also draw on the human tendency to envy others who have more of what’s regarded as valuable and to believe that the advantage of the other has been unfairly gained and that that other is “privileged.” The “aura of factuality” is encoded in the concept of “equity,” which identifies statistical disparities in educational achievement, health outcomes, income, etc., and attributes them to the malevolence of the “other.”

The evidence-free explanations of disparities are the by now rote accusations of “sexism,” “racism,” “homophobia,” “transphobia,” “Islamophobia,” and the like. This all seems, as Geertz puts it, “uniquely realistic” to the woke.

Religious devotion to DEI principles has engendered an atmosphere in which no criticism is allowed. Anyone who objects, for whatever reason, is a heretic that must be silenced and canceled, thus the infamous “cancel culture” that stains our public life. But the woke haven’t limited themselves to attacking critics of identity politics pieties; they’ve energetically vilified the values and principles of liberal democracy.

“Colorblind” policies and Rev. Martin Luther King Jr.’s plea to judge people by their characters rather than by the color of their skin are rejected by the woke as “racist.” The basic principles of meritocracy and economic mobility—merit, achievement, and potential—are now condemned as “white supremacy.” Other principles presumably beneficial for negotiating the real world—high expectations of performance, courtesy, logic and evidence, objectivity, and promptness—are denounced as features of “whiteness” that should be rejected.

The entirety of Western Civilization is rejected by the woke because it’s largely the product of white men and is thus seen as white male supremacy.

The religious fervor of the woke has been highly effective, as demonstrated by the woke takeover of almost every major institution in North America and the West generally: schools and universities, research-granting agencies, the media, the legal profession, the medical profession, many business organizations, the Democratic Party in the United States and the Liberal Party in Canada, and the U.S. and Canadian governments, which use their power to impose woke policies. Our totally corrupted schools and universities have disregarded their respective mandates of educating pupils in basic knowledge, seeking truth, and advancing knowledge, in favor of woke “social justice” and its preferred categories of people.

Only the Republican Party in the United States and the People’s Party of Canada, some state and provincial governments, some courts, and the U.S. Supreme Court have so far resisted the tentacles of the woke.

Religious fervor, whether manifested in theology or secular politics, has throughout history led to countless atrocities and widespread misery. Woke fervor has made great strides in destroying the United States, Canada, and much of the West. History may be written by the woke winners (see “The 1619 Project”), but the reality isn’t progress, but retrogression.